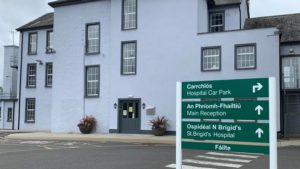 THE closure of St Brigid’s Hospital in Carrick-on-Suir, Co Tipperary, has “dealt a severe blow” to residents of Waterford, according to Cllr Liam Brazil.

During the summer months and up until recently, people had been protesting the closure of the 16-bed hospital with the aim of having it reopened in its former role, as a facility for convalescent patients, respite care and palliative care. During the pandemic the hospital was designated as a step-down unit for recovering Covid-19 patients.

Staff have been reallocated and locals worry about when the hospital will return to providing its original services.

Cllr Brazil said the hospital would be a “huge loss” to the people in Carrick and all surrounding areas, including Portlaw, Waterford, South Kilkenny and Clonmel.

“All in those areas were led to believe the hospital would reopen when Covid-19 was gone but word came through last week that it would remain closed. It’s a sad day,” he said at the December 16 Comeragh District Council meeting.

“I think the fight will continue from the people to get this hospital reopened. It’s such a wonderful facility and it had good staff,” he said, adding that he would support its reopening with the help of other councillors if possible.

Cllr Brazil said small areas and rural towns were being “hit again with the closure of post offices and creameries” which were important to people in rural areas.

Cllr Seanie Power agreed and said he would also support the reopening of the hospital. “Anywhere there’s a hospital closure it’s a bad day for the community and for surrounding small towns,” Cllr Power said.

“This was known as a great hospital for elderly people and the staff were brilliant,” he said.

St Brigid’s was built in 1837 and had serviced people in Carrick on Suir and surrounding areas since then. One councillor said the reason it closed was due to being unable to meet the standards of the Covid guidelines.

Going forward it is thought the building is going to be used as a community health network centre treating people with diabetes, asthma and chronic pain.

UHW ‘standby list’ to ensure no vaccine is wasted