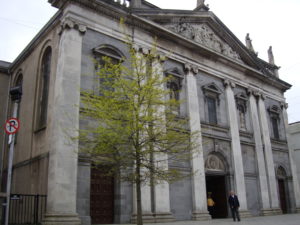 The Cathedral of the Most Holy Trinity on Barronstrand Street

THREE men were arrested on Sunday afternoon (January 10) for breaching Covid guidelines while “broadcasting mass” outside the Cathedral Church on Barronstrand Street.

Gardai were patrolling the area when they observed a vehicle parked a distance away from four males standing together outside the church. According to gardaí, it was believed that the men had travelled over 5km without a reasonable excuse. They had in their possession two amplifiers and appeared to be broadcasting mass. Gardai approached the men and attempted to explain that they were in breach of the Covid-19 guidelines. One of the men complied and gave his details. He was warned and given a direction. However, three other men present refused to give names and addresses despite the information being formally demanded of them. They also could not give a reasonable explanation as to why they were gathering on the street so they were arrested and conveyed to Waterford Garda Station. Their details were soon confirmed and after being charged with section 41 of the Health Act 1947 they were released from custody with files to be forwarded to the Director of Public Prosecutions.