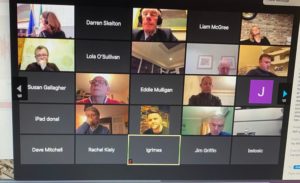 WATERFORD City & County Plenary Council is being made available for members of the public to attend online for the foreseeable future, starting this Thursday, January 14.

The decision by the council comes after a Waterford resident spent almost 12 months seeking access to the meetings.

Section 45 of the Local Government Act, 2014 states that “members of the public and representatives of the media are entitled to be present at a meeting of a local authority”. However, in several local authorities, the pandemic has resulted in decreased or limited access to council meetings, and some meetings not being broadcast at all to the public.

Michelle Byrne initially asked for supporting documents of Waterford Council’s agenda and minutes in January 2020, and again in April 2020. She was informed by the council that she “had to be a member of the media to have access to the supporting documentation”.

An email from a transparency.ie spokesperson to Ms Byrne said that while the law does not oblige the council to publish more than the notice of meetings and the agenda, not providing supporting documentation in advance “can be a barrier to public engagement in local democracy”.

“Local authorities can go further in terms of transparency than their legal obligations alone,” the email read.

By 2019, Waterford City and County Council ranked number 18 out of Ireland’s 31 local authorities according to transparency, accountability and ethics. This time, scoring 50%.

Ms Byrne complained that some committees also did not have minutes uploaded on the website, and that pages for the committees were not up to date with their membership.

The council has a legal obligation to provide minutes of all committee meetings, according to the Local Government Act 2001. However, on the council’s website, only some committee minutes are listed, while the minutes of the Joint Policing Committee, for example, are not.

By September, the resident began to write to several councillors to voice her concern. “I think given the current situation – that being the public having no access to the council meetings due to the public gallery being closed – this is more important than ever,” Ms Byrne told Cllr Susan Gallagher in September.

Cllr Gallagher said councillors had voted at the last Plenary meeting to ask the executive to investigate the cost of live-streaming meetings in the future. “It was pointed out that this method could greatly increase the number of members of the public attending meetings,” she said.

Cllr Conor McGuinness said he received the response that there was, at that time, “no provision to allow for the public to attend our online meetings” due to needing to see how the first online meeting in November worked for 45 users, including councillors, management team, staff and the press.

A Transparency.ie spokesperson told Ms Byrne that it was “questionable whether they are complying with Section 45 of the Local Government Act 2001 if public attendance at meetings held remotely isn’t being facilitated”.

Following an FOI by this newspaper into the matter in early January, Ms Byrne was informed by the Plenary council that they were “in the process of ensuring all committee documentation is up to date on our website” and that they would be able to facilitate public attendance at online meetings from early January.

“As a result of compliance with public health guidance and best practice, we were not in a position to accommodate requests from the public to attend these meetings,” the email said.

The legal basis for holding remote meetings was signed into law in October 2020. The council said the “associated supplementary Standing Orders were only adopted at the first available meeting in November” and that they will be in a position “to allow public access to our meetings from January 2021”.

It is unclear as of yet whether this will extend to Metropolitan, Comeragh and Dungarvan/Lismore council meetings as well.

Responding to request for comment from the Waterford News and Star, Waterford Council said: “Prior to Covid-19 restrictions taking effect, members of the public could attend a meeting of the council, both Plenary and all Municipal and Metropolitan District meetings by request for a ‘ticket’ in advance of the meeting via the Meetings Administrator.”

However, as a result of Covid-19 and “compliance with public health guidance” the Council said they were “not in a position to accommodate requests from the public to attend”. Online meetings began in November.

Members of the public wishing to attend future meetings can contact the meetings administrator, Honor Dunphy, at [email protected]