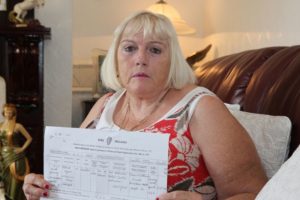 AFTER more than 50 years seeking justice for the loss of her baby son Patrick in 1966, gardaí have been in touch with Waterford woman Kathleen Byrne and are in the “preliminary stage” of assisting her in a historical case.

At a recent Joint Policing Committee, Sinn Féin’s Cllr John Hearne raised Kathleen Byrne’s case (previously reported on in the Waterford News and Star) and asked why there had been no investigation into “mass graves of dead children being uncovered across Ireland”.

Cllr Hearne told the meeting that he is dealing with individuals who had children taken from them.

Cllr Hearne was referring to Kathleen Byrne, of Lismore, Waterford. Kathleen Byrne gave birth to her second child, Patrick, in 1966 in Airmount Hospital, Waterford. Shortly after his birth he was transferred to Temple Street Children’s Hospital in Dublin for a “small procedure” and never seen by Kathleen again.

Patrick’s heart and lungs were removed for research purposes without Ms Byrne’s prior knowledge or consent, which was confirmed to her in a letter of apology from Temple Street Hospital in 2001.

His body was never returned to her. Years later, she was informed that her son had been buried without her knowledge at Glasnevin Cemetery in Dublin, in a mass grave.

Speaking at the JPC meeting in early January, Chief Superintendent Dunne said Waterford gardaí would meet with the individual in question and take a statement. “If the alleged incident didn’t occur in Waterford I will see that it is sent to wherever it did occur,” he said.

The matter is in a “preliminary stage,” they said, adding that in line with policy they would not be commenting further. This newspaper established independently that the individual and historical case in question is that of Kathleen Byrne.

The guards recently spoke to Kathleen and have arranged to meet her this month. Ms Byrne said they informed her they would visit her home in the second week of January to discuss her case.

Cllr Hearne has been in touch with Kathleen Byrne about her quest for justice for her child, Patrick, for over a year now and described the situation as a “national scandal”. The guards “should be looking into the issue to put an end to the agony of families still searching,” he said.

Ms Byrne said her hope going forward is that the gardaí will be able to work on her case and bring some “closure” to her family. “I want to get his bones back, and I want to lay him down in the grave I have ready for him in Ballinaneesagh. There is a headstone but the grave is still empty. I just want to do like any other mother who lost her child,” she said.