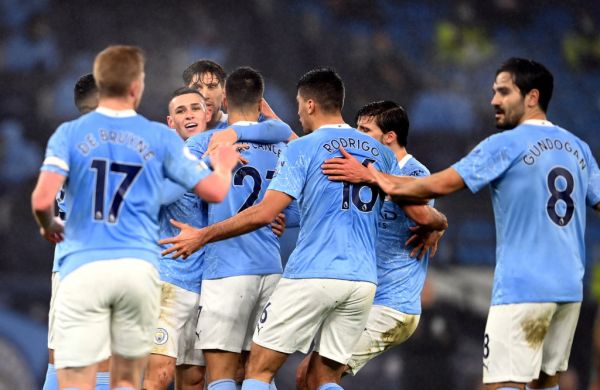 Phil Foden scored the only goal as Manchester City moved up to third in the Premier League with a hard-fought 1-0 win over Brighton at the Etihad Stadium.

Foden netted his eighth of the season just before half-time – a superb low strike from the edge of the box – as City maintained their recent climb up the table with a fourth successive league win.

It should have been more comfortable for the dominant hosts as Raheem Sterling missed a late penalty, Bernardo Silva hit the woodwork and Seagulls keeper Robert Sanchez made a number of outstanding saves.

But the visitors were unable to capitalise on the reprieves and, even though they remained in the contest to the end, they rarely threatened and could not force an equaliser.

FULL TIME | Phil’s goal is enough to earn us all three points! 💪

City are now unbeaten in 14 matches in all competitions and building momentum although, as the game comes under increased scrutiny, their goal celebration could attract criticism amid the coronavirus pandemic.

With Gabriel Jesus dropping back to the bench after only returning from a spell out with coronavirus at the weekend and Sergio Aguero isolating, City started without a recognised centre forward.

They probably missed the presence an established striker could have given them as Brighton defended solidly, but the hosts still created a number of chances in the opening period.

Kevin De Bruyne had some of the best of them, first going through on goal after exchanging passes with Ilkay Gundogan on the edge of the area but Sanchez stood up well to deny him.

De Bruyne tested Sanchez again with a powerful shot following a corner and the Belgian also had a free-kick blocked after Adam Webster was deemed to have passed back to his keeper.

Brighton were not completely devoid of ambition and went close when Leonardo Trossard curled a shot just beyond the far post.

Sanchez saved again from De Bruyne after City broke from one end of the field to the other in a flash following a Brighton corner and the hosts finally claimed a deserved lead a minute before the break.

Typically De Bruyne was involved, finding Foden outside the area but the goal owed all to the brilliance of the 20-year-old.

Foden took the pass in his stride and took out a defender with a clever first touch before steadying himself and firing a low shot into the bottom corner.

The hosts take all the points after a brilliant Phil Foden finish#MCIBHA pic.twitter.com/xU8rUsGcKP

City’s relief at finally breaking through was evident, although amid renewed calls for players to curb goal celebrations, the large group hug that formed may attract scrutiny.

When the action resumed in the second half, City threatened to overwhelm the Seagulls. Riyad Mahrez shot wide and Gundogan brought another good save out of Sanchez before Silva thumped the follow-up against the woodwork.

Remarkably, however, Brighton remained in the game. Ederson, returning after missing three games following a positive Covid-19 test, was a bystander for much of the encounter but might have been called upon had John Stones not produced a fine tackle to block Neal Maupay.

City should have killed off the game in injury time as Sanchez brought down De Bruyne but substitute Sterling blazed over from the spot. It gave Brighton one last chance to get forward but they could not make it count.