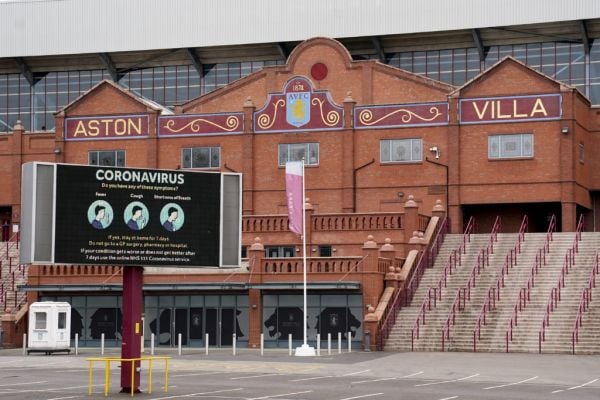 Aston Villa have had a second Premier League match in a week postponed after Everton’s visit on Sunday was put off due to ongoing coronavirus issues at the club.

Dean Smith’s side had already lost the midweek fixture against Tottenham following the closure of their training ground a week ago after nine players and five staff tested positive for Covid-19.

The resulted in the club having to field youth team players in the FA Cup defeat to Liverpool and despite initially moving the Everton match back 24 hours to give it every chance of taking place it has not been possible.

Aston Villa can confirm that Sunday’s scheduled Premier League fixture with Everton has been postponed.

Our fixture with Newcastle United, which was postponed as a result of a similar outbreak at their training ground, will now take place on Saturday, January 23 at 8pm.

“Aston Villa’s home match against Everton, scheduled to be played on Sunday, January 17 has been postponed by the Premier League Board,” said a Premier League statement.

“Following the rescheduling of Villa’s fixture against Tottenham Hotspur, which was due to be played last night, a significant number of players and staff remain in isolation.

“As a result, the Premier League Board has agreed to Aston Villa’s request to postpone their match on Sunday.”

Following the latest midweek round of fixtures Villa are already two matches behind the majority of their rivals and that will rise to three at the weekend.

One of the matches they have in hand – the game at home to Newcastle which was postponed from December 4 after the north east club’s own coronavirus outbreak – has been rescheduled for Saturday, January 23.

Premier League clubs were issued with new guidelines last week and chief executive Richard Masters has written to all to remind them of the “critical importance” of adhering to the protocols.

Villa plan to reopen their training ground this weekend, albeit too late to prevent the Everton postponement.

Aston Villa’s home match against Everton FC, scheduled to be played on Sunday 17 January at 12pm GMT, has been postponed by the Premier League Board

“The club would like to express its immense gratitude to the medical experts who have helped us to get a significant Covid-19 outbreak under control, as well as the Premier League board and our fellow clubs for their understanding during this period,” read a Villa statement.

“We expect that members of the first-team squad and staff who are healthy and safe to return to training will do so on Sunday when the isolation protocols will have been observed.

“The club continues to wish all those affected by the virus a speedy recovery.”