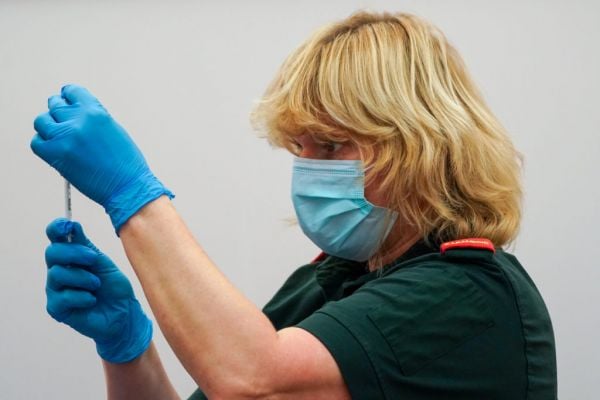 New figures show that 94,000 people have received a Covid-19 vaccine dose in the Republic.

Some 71,000 doses have been administered to frontline healthcare workers and a further 23,000 to residents or staff of long-term residential facilities.

A total of 140,000 vaccines should be administered by this Sunday, while people will also start to receive their second dose of the vaccine this week.

The Republic’s vaccine rollout will soon ramp up, as the Cabinet approved a €91 million deal for GPs and pharmacists to vaccinate 1.5 million people.

Speaking on his way into Tuesday’s Cabinet meeting, Minister for Transport Eamon Ryan said all agreed a rollout “can’t be fast enough”.

“We’re doing well in the world data tables, as I read it probably the fastest in the European Union at the moment, but we have to make sure we get it right,” he said.

The updated figure means 1.89 per cent of the Irish population has now received the first dose of a vaccine to protect against the disease.

In Northern Ireland, more than 130,000 first doses have been distributed with 7 per cent of the population inoculated.

It comes as the UK began a vaccine rollout ahead of the rest of Europe with its approval of doses independent of the European Medicines Agency (EMA).

However, Israel currently leads the way globally, with over 25 per cent of its population inoculated against the disease.

In the Republic, there have been a total of 81 reports of suspected side effects associated with the Pfizer/BioNTech vaccine.

The reports were of a mild to moderate nature and included side effects such as abdominal pain, nausea, fatigue, joint pain, some experience of dizziness, headache, itching and a rash.

All were consistent with the known and anticipated side effects that emerged during the vaccine’s clinical trials.

It followed criticism of two Dublin hospitals after it emerged that a small number of staff family members were given leftover doses of the vaccine.

Both the Rotunda hospital and the Coombe hospital have said it was done to ensure that no dose was wasted.

It also emerged on Monday that a number of hospitals in the south of the country have received and administered a disproportionately large number of Covid-19 vaccines, relative to their size.

HSE national lead for acute hospitals Dr Vida Hamilton said larger hospitals had received bigger amounts of vaccines in an attempt to use doses “efficiently and effectively”, and supply had been “more uneven than anticipated”.

However, an infectious diseases consultant has said that to focus on a few instances of leftover vaccines being given to non-health care workers is “missing the bigger picture”.