Given Covid and sent home 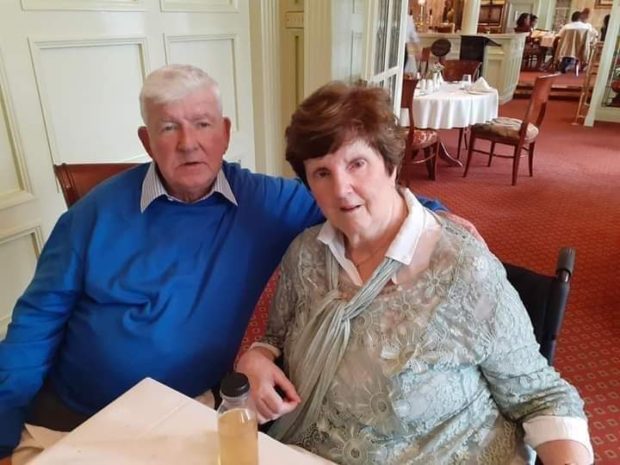 Families of patients who contracted covid in University Hospital Waterford say that the HSE are abandoning their duty of care by sending patients home with the virus. Darren Skelton reports

THERE has been multiple cases of patients contracting Covid-19 in University Hospital Waterford and then being sent home to their families to isolate because of a shortage of beds at the hospital. Three family members of such patients contacted the Waterford News & Star this week to express concern and confusion about what they’ve described as a “terrifying situation”.

Ann Marie McCarthy’s elderly father Oliver Renehen slipped on ice on January 3 and was immediately rushed to UHW, where he would remain until January 12. He was put into Orthopaedic Ward 2 – one of two wards that had a confirmed outbreak of Covid-19 on January 8.

“Dad is the main carer for our Mam who is in the last stages of Parkinson’s Disease,” Ann Marie said. “He looks after all her needs such as administering between 15-20 tablets a day, feeding her, giving her medicine pump and more. He rang us on January 12 to say he would be coming home the next day and we were happy at first, but then shocked to learn that there wasn’t going to be any care package made available to him.”

Before Oliver could make it to the front door, he was told that he couldn’t go home yet as he had tested positive for Covid. On admittance to the hospital, he had a Covid test that was negative, so it was contracted on the ward.

“I felt sick,” Ann Marie said. “And then they told us that they were sending him home anyway. How on earth could they send an elderly man, just after surgery, home to his high risk wife. We explained to the hospital that we were concerned for our parents’ safety but honestly, they made us feel like we were annoying them. They said that he was well enough after his surgery to go home and not unwell enough with the virus to be kept in.”

Oliver’s bed was made up in the downstairs bedroom that he shares with his wife Maura, who sleeps on a hospital bed in the room.

“We told the hospital that it would be impossible for dad to self-isolate,” Ann Marie said. “There were no toilet facilities upstairs and besides, he wouldn’t be able to climb the stairs as it is. We asked them to give us time to go to the house and put a bed into the sitting room, which is just in the front door so not ideal for isolating but it would be all we could do but they wouldn’t give us the time.”

Because Oliver was coming home with Covid-19, the care visits that Maura gets from a nurse were temporarily stopped. They left Oliver on a chair in the sitting room and left him to it.

“We were in an awful panic because we obviously couldn’t go into the house either,” Ann Marie said.

Their hearts broke as they brought medicine and food to the door.

“We could see directly down into the kitchen. Dad was sat there and Mam was in her room. He looked so exhausted and helpless,” Ann Marie said. “He was begging us to come in and help him but we couldn’t. I left the house that day more upset and more angry than I’ve ever been.”

Ann Marie’s 12-year-old daughter even rang her Grandad begging him to stay away from her Nanny for fear of giving her the virus.

“He promised her that he would but we knew that he wouldn’t be able to keep that promise,” Ann Marie said. “I know the hospital is under pressure right now but the situation that they have put us in is impossible. Dad could fall again because he’ll be overdoing it in trying to care for Mam and we’re so worried now that she’ll get Covid, which would surely be devastating for her.”

The family were offered a position for Maura in Waterford Residental Care Centre (formerly St. Patrick’s) but turned it down as it was only respite (no overnight) and that hospital was already believed to be dealing with a large outbreak of Covid amongst staff and patients.

“They told us that we can mask up and care for our parents,” Ann Marie said. “We had been caring for parents but then the hospital gave my dad Covid-19 and as I have asthma and am very worried about contracting Covid, we’re put into a horrible situation.”

The couple did everything right in 2020, cocooning and protecting themselves and others without getting as much as a sniffle. Sadly, after a stay in UHW, Oliver got Covid and on Monday morning (January 18) the family’s worst fears were looking like a reality as Maura started to develop symptoms.

“We were told to apply for a home test for her, which is what we did,” Ann Marie said. “However, Public Health contacted us on Monday morning and told us we had to go to a test centre – of course she’s not well enough to do that so now we have to reapply for a home test and we’ve been told that could take 3-7 days.”

The family face a nervous wait now to see if both their parents will have to isolate and fight Covid together.

UPDATE: Maura has since been tested and received a POSITIVE result for Covid-19

“There is a duty of care that is being ignored here, especially as my father was in their care when he contracted Covid. He was simply thrown out and put into a dangerous, unimaginable situation. They are the ones who are supposed to protect us but they’re putting us in the most danger,” Ann Marie said.

Ann Marie says that the community around them in Upper Village Kilmacow have been amazing, cooking dinners and dropping in newspapers etc. She said that she would trust them to keep their parents safe before the HSE.

Two other families contacted the Waterford News & Star this week to say that their parents – one an 84-year-old man, and the other a woman in her early 60s – had been in the hospital, got a negative Covid test and then contracted the virus on a ward. Both patients were deemed to be well enough to go home. The daughter of the 84-year-old man said that she was shocked that someone with underlying conditions could contract the virus in hospital and then be sent home without a care package.

“My grandad has diabetes and an ongoing heart condition and was brought to hospital after he had a bad fall at the start of the year,” the man’s daughter said. “He was moved to the Ardkeen Ward – a non-Covid ward, where he was tested again for Covid, just to be sure. Once again he was negative.”

After a few days in the ward, the man was once again tested for Covid-19 – on the weekend of January 16/17 – and this time he was positive. The family were told that he wasn’t sick enough to stay in the hospital and he was sent home to self isolate.

The Waterford News & Star contacted UHW for comment and the following was received by a spokesperson:
“Management at University Hospital Waterford can confirm that there are currently a number of outbreaks within the hospital. The Crisis Management Team are actively managing these outbreaks and the hospital continues to implement the appropriate Covid-19 controls and management protocols. The hospital cannot comment on individual cases, however, patients are discharged only when deemed clinically fit for discharge by their consultant.”