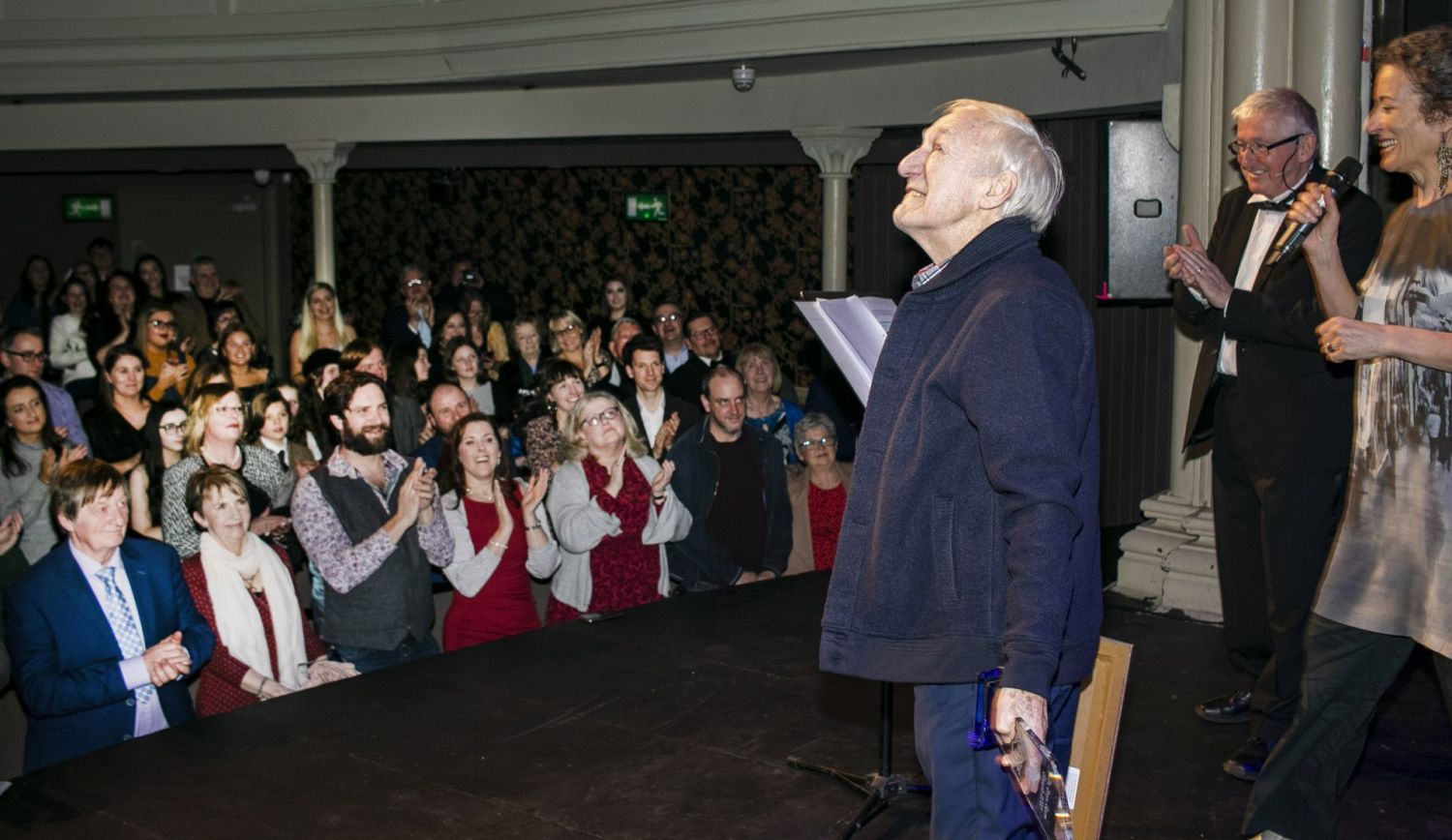 The late Des Manahan on stage at the Theatre Royal last February, on the occasion of receiving the Lifetime Achievement Award at the Waterford News & Star Green Room Awards. Photo: Joe Evans

WATERFORD theatre is in mourning for the death of its most loved entertainer. It’s a measure of the affection that he was held in Waterford hearts that Des Manahan was known simply as Des. Audiences gave that collective ‘aaaah’ of affection when the diminutive Des entered and sat waiting for the laughs and, sometimes, the tears to come. So strong was Des’s stage-presence that audiences felt comfortable and at home when Des was on stage.

Des was born to be on stage and that’s where he lived out his life. My late mother-in-law Maisie Hodge remembered Des as a small child wandering around the Theatre Royal where his father, Doc Manahan, was manager and Maisie was his secretary at a time when the Royal was also a cinema. When Des tuned a piano for us, Maisie and he had a great old chin-wag about former times and old acquaintances when his father was alive.

Des’s family were closely connected to the old Waterford Grand Opera Society and his uncles John, Tom and Paddy were mentors to the young Des. Paddy, who played many comic parts and clearly influenced Des, was Tony Award-winning actress Anna Manahan’s father. Anna (who acted with Des in the Red Kettle production of ‘A Miracle in Ballymore’ often remarked that, when she got off the train in Waterford, people would ask her if she was related to Des – such was his popularity. Des’s devoted and talented wife Mona was always at his side throughout his career and was a highly-respected costume designer for many professional companies.

Des learned his trade well in the fifties when there was a feast of theatrical and musical theatre groups. Stage discipline was strong, theatrical traditions were imbedded in the actor’s psyche and audiences knew their stuff. Des was a fine actor, carried all that knowledge with him and was never slow to share it. “Never over perform,” said Des, “less is always more.” There was a beauty to Des’s performances that was entirely natural and that is why – to quote Keats ‘Beauty is truth; truth beauty’ – because beauty cannot be manufactured.

Des Manahan could do anything. He could sing, act, dance, conduct, design sets and costumes, coach and judge shows with an uncanny precision. Des could tell you where a show would finish in the Festival or how far a show would travel in Tops. I always sought out his advice and when we worked together on a Tops show as Producer and Musical Director, his advice was invaluable.

Theatre-folk always feel that they knew Des all their lives. From the moment I played my first part onstage – 50 years ago – I knew Des. And we were always friends. As everyone else was with Des. Because I never heard him say a bad word about another performer. Des never wanted to direct shows. “I haven’t the heart for it, Pat,” he said, “because directors sometimes have to be cruel and that just isn’t me.” He mentored young actors, developed their talents and allowed them to shine while remaining in the background. Des loved talent and respected all performers. “It isn’t always easy, Pat,” he said, “especially if you’re trying to make a living from it.”

His musicality was, I often thought, his greatest gift and we often lost sight of how beautiful his singing voice was. Des had range, depth, timing and a natural timbre to his baritone. His G&S repertoire was epic as he brought that special comic genius of his to the recitative roles of the Major General, the Jester, the Lord Chancellor and, of course, Koko in the ‘Mikado’ where he actually managed to climb up to the balcony via the Proscenium Arch. Despite playing a main part, he would often deputise as MD, chorus master, pianist and director’s assistant.

I had the privilege of acting with him in many productions and he was a gifted straight actor. His immense talent was recognised far beyond the Déise. He played in 13 different productions of the Merry Widow – and I’m glad to say that I played Njegus to his Baron – in Cork, Dublin and Waterford. He also performed with other societies in productions of Die Fledermaus, Brigadoon, Guys and Dolls, Oklahoma, South Pacific, Carousel, Man of La Mancha, Maritana – the list is endless, really. His voice, as he sang in his last role of Gus the Theatre Cat in Southeastern Theatre’s production of Cats “would soften the hardest of hearts”.

Tops audiences adored him and his famous ‘Bottle Orchestra’ – where a quartet blew a tune on partially-filled wine-bottles was a real house-pleaser. My own favourite memory of Des will be in his role as Hans Christian Anderson in his life-long friend Dermot Graham’s Banks and Finance Tops show that reached the Gaiety. This was vintage Des as he performed a medley of hits from the show that was a riot of colour and pure joy. I don’t think I have ever seen Des happier and it’s a memory that I will always cherish.

As I write, heartfelt tributes continue to pour into social media from theatre-folk who knew him only in recent years and people, like myself, who feel they have shared a lifetime of theatre with him. The word that unites all tributes to Des is ‘gentleman’ and he was all of that. I delighted in his performances and was proud of him for flying the flag for the Déise.

I am so happy and proud that the Green Room presented him with the Waterford News & Star Green Room Lifetime Achievement Award onstage at the Theatre Royal, where it all began for him, with a full house of his theatre friends standing in applause to acknowledge Des Manahan – prince of Waterford Theatre.

When great actors exit the stage, they leave a presence after them and so it is with Des Manahan.

I have lost a life-long friend and fellow-actor that I respected so much and my heart aches at it. God bless you Des; you were one of our own.

The Waterford News & Star would like to extend our deepest sympathies to Mona Manahan and family on the loss of a loving husband and father.