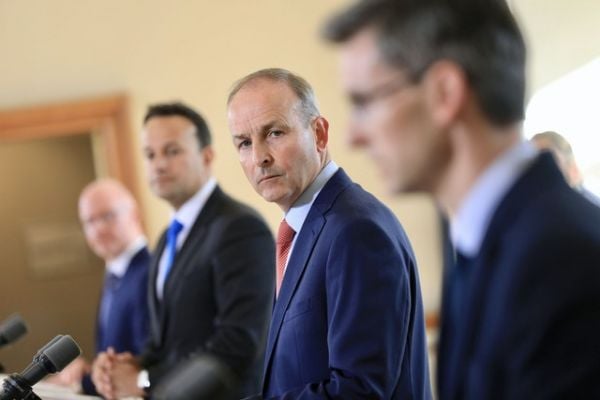 Talks are ongoing between the UK and Ireland to find a “two-island” solution to mandatory quarantining, Taoiseach Micheál Martin has confirmed.

However, Mr Martin added that Ireland was “not in a position to seal the border”.

The Taoiseach made the comments in response to calls for the Government to introduce mandatory quarantining to curb the spread of Covid-19.

The deputy chief medical officer voiced his support for stricter measures on Friday and said mandatory quarantine should be introduced for people coming into Ireland.

Dr Ronan Glynn told the Oireachtas Health Committee that there should be as few people as possible coming into the country for non-essential reasons over the coming months.

It came a day after Tánaiste Leo Varadkar said introducing a 14-day quarantine period for travellers arriving in the country would be “disproportionate” and “unworkable”.

Speaking at Government Buildings on Friday afternoon, the Taoiseach said Mr Donnelly had been speaking to Mr Hancock and that the two transport ministers had also been discussing the matter.

“I’ve spoken to Arlene Foster and Michelle O’Neill about this last week, we had a meeting,” he said.

“The Northern Executive would have a different perspective on flights from GB into Northern Ireland, and that is problematic. That creates an obvious issue.

“So, therefore the two-island context is one that could be pursued.”

Ireland’s current regime on international travel makes it more difficult to maintain suppression of Covid-19, particularly in light of new strains of the virus, Dr Glynn said on Friday.

“Nphet has been as clear as it possibly can be in relation to international travel. We do not want non-essential travellers coming into this country. We’ve been clear on that for months.

“It has happened, although obviously the volume of travel has been way down, which is welcome.

“There is no doubt that travel is continuing to play a role in the transmission of this disease in this country and will make it more difficult to maintain suppression over time. That’s particularly in light of the new variants.

“The regime that’s there at the moment will not stop all cases coming into this country.”

Foreign Affairs Minister Simon Coveney said the Government has decided against the measure because “it’s much more difficult to do than the benefit that it might derive”.

He told RTÉ News at One: “We haven’t decided to go down that road. Having said that, you know, we have changed the conditions around international travel really quite significantly in the last number of weeks.

“You cannot arrive in Ireland now, either by air or by sea without having a negative PCR test in the previous 72 hours and, if you do, you know you will even be talking to the guards, and you could be fined up to 2,500 euros.”

The Foreign Affairs Minister added that authorities in the Republic do not currently have the legal entitlement to hold a person at Dublin airport indefinitely, after it emerged that 80 people had recently arrived into the State without proof of a negative test for Covid-19.

Mr Coveney said the Government is also looking at introducing new visa requirements for parts of the world where new strains of the virus have developed.

He said: “We’re looking at the viability now of whether we can introduce new visa requirements from South Africa, from Brazil, and potentially some other parts of the world as well.”

Dr Glynn said Nphet is particularly concerned about “discretionary” elements of international travel, such as incoming travellers being advised to self-isolate, rather than the measures being enforced.

He said: “Our advice is that the discretionary elements of travel need to be addressed to the greatest extent possible.

“As I say, the key is that as few people as possible come into this country for non-essential reasons over the coming weeks and months.”

Dr Glynn said Nphet are not “experts in what’s possible” from a political perspective.

The committee also heard there have been 532 deaths related to Covid-19 so far in January.

This is in line with the projection from Nphet that this month would see between 500 and 1,000 deaths linked to the disease.

Liam Woods, director of acute hospitals at the HSE, told the committee there are currently more than 6,000 staff off sick, because they are either Covid-positive, self-isolating or cocooning.