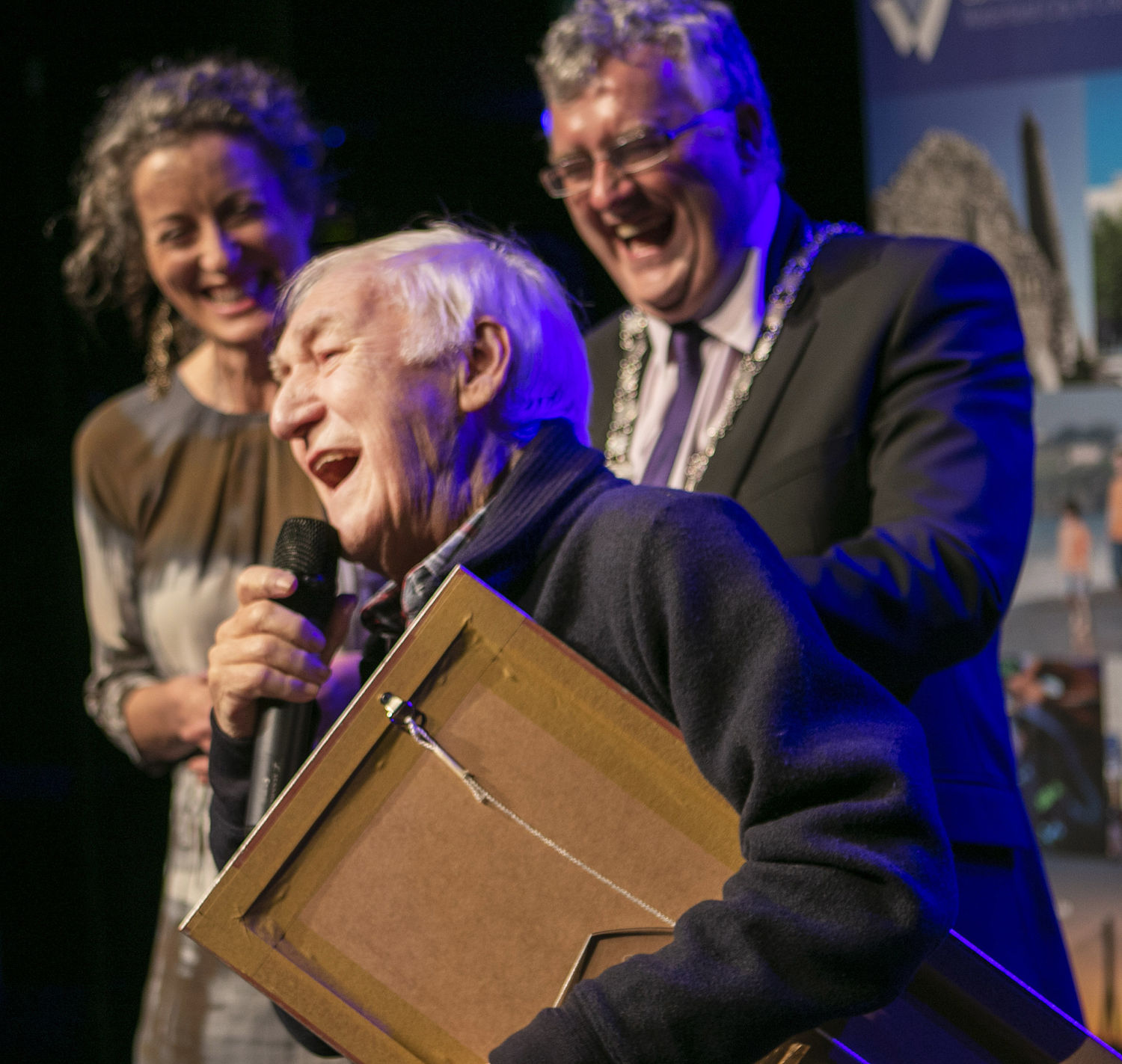 “I have played, in my time, every possible part

And I used to know seventy speeches by heart

I knew how to gag

I knew how to act with my back and my tail

With an hour of rehearsal

I never could fail

I’d a voice that would soften the hardest of hearts

Whether I took the lead or in character parts.”

Des Manahan’s final stage performance, as Gus the Theatrical Cat at the Theatre Royal in October/November 2019, couldn’t have been more apt.

When news broke that Des had been cast as Gus in the South Eastern Theatre Group’s production of Andrew Lloyd Webber’s musical hit, there was an excited buzz about what Des would bring to the role.

For a man who routinely made fun of his lack of height, there was virtually no part Des assumed over the past eight decades from which he didn’t cast a lengthy and critically acclaimed shadow.

Des elegantly owned every part he played and constantly honed his craft without a hint of pretension or aloofness. He was an incredibly generous actor who treated every person he shared the stage with, from principal player to chorus member, with equality, warmth and respect.

‘The only love which in any way approximates to the longevity of his wonderful bond with wife Mona, Des Manahan and the Theatre Royal went hand in glove. It’s difficult to consider one without the other’

Des Manahan was as popular with his fellow cast members as he was with audiences who, in more recent years, greeted his arrival onto the Theatre Royal stage with audible delight. What a compliment to both his talent and popularity.

Hailing from great music-loving stock, Des was initially introduced to ‘The Royal’ by his father ‘Doc’, who managed the theatre during Des’s early boyhood.

The only love which in any way approximates to the longevity of his wonderful bond with wife Mona, Des Manahan and the Theatre Royal went hand in glove. It’s difficult to consider one without the other.

Music, by his own admission, came easily to Des. Self-educated, he was as happy sitting in front of a piano as he was when declaring before an entranced auditorium that he was “the very model of a modern Major-General”.

While a relatively shy man off the stage, Des was the complete opposite while playing or acting. Be it musical, grand opera or ‘the Tops’, the theatre touched something in Des’s soul which kept him vital and enthused long after many other actors opted for retirement.

And what a back catalogue Des created, which Pat McEvoy notes in his wonderful tribute in this week’s edition: ‘Die Fledermaus’, ‘Brigadoon’, ‘Guys and Dolls’, ‘Oklahoma’, ‘South Pacific’, ‘Carousel’, ‘Man of La Mancha’, ‘Maritana’ – 13 different productions of ‘The Merry Widow’ – and so many more.

That he was named as the inaugural Lifetime Achievement recipient at our inaugural Green Room Awards in the Theatre Royal last February feels all the more poignant from this juncture.

The “lovely fuss” as Des himself described it, gave a packed auditorium the opportunity to say the heartfelt ‘thank you’ that the continuing public health restrictions denied us at Killea on Monday afternoon.

En route, the funeral cortege paused at the Theatre Royal where a socially distant gathering of mourners stood to applaud Des Manahan one last time.

We will honour the legacy of Des Manahan again when circumstances allow it. But for now, to echo William Vincent Wallace, we’ll give thanks for all those happy moments he gave us. Rest In Peace, Des. And thank you.