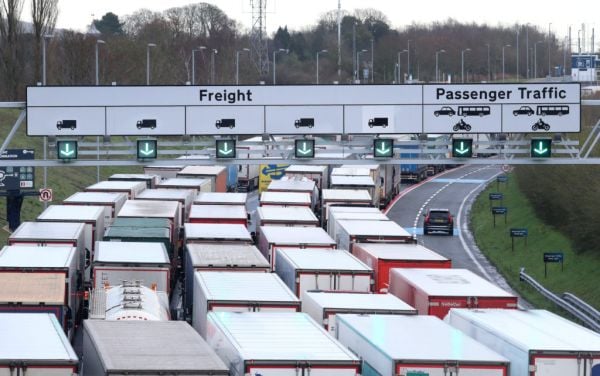 Hauliers are warning of significant new disruption at the Irish Sea and Channel ports that will likely lead to more delays into and from Ireland of foodstuffs and parcels after the French government imposed mandatory Covid-19 testing for Irish truckers travelling into the country for the first time.

The move will lead to more uncertainty on top of the disruption at Channel and Irish ports caused by Brexit.

As the Irish Examiner reports, the supply chain of foodstuffs and parcels from the continent will face even more uncertainty and warned that “on some days you could get delays to deliveries and on other days you could be Ok,” he said.

The French had moved because of the prevalence of the English variant of Covid-19 in Ireland, which means that even Irish essential workers from Thursday have to show a negative test taken 72 hours before arrival to enter France, Mr Flynn said.

The Department of Transport here has launched its emergency planning to set up free testing centres to cover the two major UK landbridge ports in the Republic, including for Rosslare, of which Mr Flynn said the industry had concerns because of its location some distance from the port.

A car park at Dublin Airport will be the major testing centre truckers for Dublin Port.

“It is good that the State is covering the costs of the antigen tests and it has been a bit of challenge to get them secured” because they had not been approved by the Irish health authorities, he said.

“The concern for the industry is if it is happening here and in France and in Holland, and with Britain as a third country that there will there be new requirements at the Irish Sea. It is a genuine concern because to do an antigen test will eat into drivers’ regulated working hours,” Mr Flynn said.

Even the direct sea routes to France from the Republic will be required to have truckers’ tested, the hauliers’ group said.