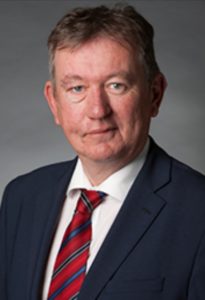 THE number of deaths in Waterford City between January 15 and 18 was the equivalent of the numbers recorded over the course of a typical month, the City’s Deputy Coroner has disclosed.

And it’s been confirmed that the majority of these deaths, while not specified numerically, are linked to the prevalence of Covid-19.

Speaking to the Waterford News & Star on Friday last, Gerard Herlihy said: “Last weekend alone as in between Friday, January 15 and Monday, January 18, there were as many deaths reported as would normally occur in a month – so unfortunately there has been a significant increase this month whereas there was no perceptible increase in December that I could point to. But in the first three weeks of January, we’ve probably had twice as many deaths as would normally be reported in a pre-Covid month in ‘normal’ times so to speak.”

Three separate sources account for the notifications of bereavement made known to Mr Herlihy’s office, namely University Hospital Waterford, the city’s nursing homes and within the community.

The number of recorded deaths in the city are made known on a statutory basis to the Minister for Justice through Waterford’s three coroners based in the City, County and Dungarvan. Such figures are not generally disclosed to anyone other than the Minister’s office.

Without getting into specific numbers, Mr Herlihy conceded that most of the deaths he has been notified of since January 1 were Covid-related “but not all – there are other deaths there”.

Of the Covid-19 deaths, Mr Herlihy continued: “Those deaths are primarily elderly patients –nursing home residents – but there are also elderly patients outside the nursing homes as well who are among the reported deaths. We continue to liaise with the hospital, the nursing homes and the GPs within the city; Waterford is being very well served by the Trojan and heroic efforts that are being made by the frontline staff who are dealing with this at the coalface day in, day out, be it hospital and nursing home staff, nurses, GPs, the pathologists and the undertakers who are all dealing with this directly, all of whom are working for our benefit.”