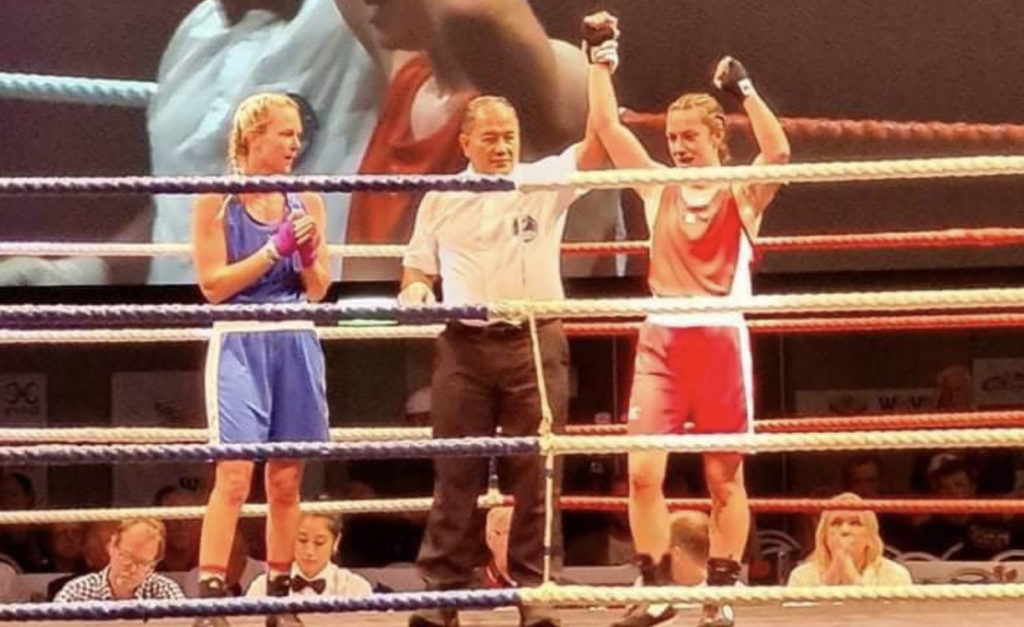 The moment when Waterford’s Erin Walsh was crowned as the New Zealand Featherweight boxing champion.

Nearly eight years to the day after winning an All-Ireland Under 18 boxing title in her native country, Waterford’s Erin Walsh struck gold last weekend when she lifted the National Featherweight crown in her adopted New Zealand.

The 25-year-old Waterford native, who hails from Dominick Place, made the move to Auckland over five years ago, and her title success brought great pride and joy not just to her family, but her former coaches here in Waterford.

Her fight against Peters for the Elite title was in the Featherweight division at 57kg, and after a brilliant win over Michelle Nuku, this set her up for what can be described as the biggest success of her boxing career.

A former graduate from the Tramore Boxing Club, there was great joy when news filtered through that Erin claimed the fight with one of her former coaches Larry O’Brien taking to social media to proclaim the clubs delight.

In a Facebook post, O’Brien said, “A proud man here. I just got news that a girl that Christy O’Reilly used to train in Tramore Boxing Club has just won the 57kg Elite title in New Zealand over the weekend. We in Tramore are so happy and proud of Erin Walsh. Some woman.”

Daughter of Karen and Hugh (Tiny) Walsh, Erin is from a sporting family with her two brothers Danny and Luke starring in recent years for Villa AFC with the latter leading the Waterford Youths to Inter League final success a number of years ago.

Her father Tiny was a well-respected former chairman of Johnville Football Club, and it comes as no real surprise that there was celebrations in the Walsh household when the news filtered through of this brilliant success.

Understandably Erin is said to be “over the moon” and “delighted” with the success with her rise at Elite boxing level coming thanks to the brilliant coaching that received from both Christy O’Reilly and Larry O’Brien in Tramore.  Congratulations Erin from all of us here in Waterford.