Well Said: Moira Sweeney on her grá for film and Gaeilge 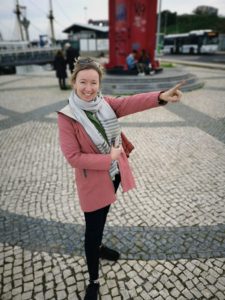 Moira Sweeney’s film and documentary making has taken her into every county in Ireland, with much of her work produced via Nemeton TV in Gaeltacht na nDéise.

NORTH Wicklow, by way of Enniskillen, London, Newcastle and An Rinn: Dr Moira Sweeney and I covered a mighty swathe of these western isles when we spoke last Wednesday.

Language, both spoken and sung, form the basis of storytelling the world over and capturing those stories, many in our native tongue, has formed the rewarding cornerstone of the Fermanagh native’s film making career.

“My father, Frank Sweeney, was a great photographer and he basically documented us on really high-quality slide from when we were very young – a family of five,” Moira told me via Zoom from her Wicklow home.

“We spent our childhood being directed into positions on the side of cliffs and so on! My aunt Geraldine, my father’s youngest sister, was a photographer who studied in England and I spent a lot of time doing projects for her – I was her ‘character’, so to speak, throughout my teens on a whole host of projects, so I was very used to being on both sides of the camera from an early age. The first present I wanted once the Santa years had passed was a camera and throughout my teens, I found myself quite naturally directing all of my friends into compositions for photographs.”

Moira continued: “And when I went to college (in Newcastle Upon Tyne and London), I thought initially that photography was what I’d gravitate towards but very quickly, I came to the realisation that I was really suited to making films. The David Attenborough series of films were a huge influence on me and at the age of 13 or 14, I could have told you then that filming and working on issue-driven documentaries was something I was going to do when I grew up.”

Moving back to Ireland in 1996, equipped with a BA (Hons) in Fine Art (specialising in film) and a Masters which specialised in drama and television, Moira became a producer/director at RTE, concentrating on features and the Irish language.

“My Irish would have been very rusty at that stage having not lived in Ireland for a few years,” admitted Moira, who is Course Director for WIT’s Higher Diploma in Television and Digital Media Production.

“We studied Irish in our Catholic School in Enniskillen so I was glad I had at least that much Irish under my belt because I was able to take very rusty, raw and out of practice Gaeilge and, with help from RTE, become fluent – but getting up to that level was like pulling teeth initially! And from there, I made a mixture of English and Irish films, programmes and documentary series, particularly arts and sport with a little bit of investigative journalism thrown in for good measure.”

In 2003, Moira went freelance (“it was the height of the Celtic Tiger with loads of production companies producing really exciting work”), making films for RTE, TG4 and BBC Northern Ireland. And Waterford – An Rinn in particular – was to become a significant element of her life behind the lens. 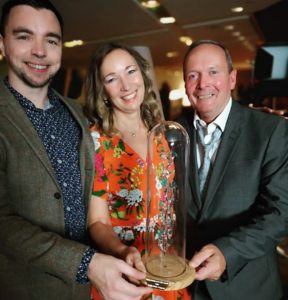 Moira and Elton Mullally are pictured at the Bord Gáis Energy Theatre in September 2019 where they received a Business to Arts Award for their RTE documentary ‘Starboard Home’. Also included is Charlie Murphy of the Dublin Port Company who commissioned the film.

“It’s such a beautiful part of the country,” said Moira, who was a key figure in the inception and production of Nemeton TV’s superb ‘Laochra Gael’ GAA documentary series on TG4. “When I left RTE, ‘Laochra Gael’ was one of the first jobs I got an d I ended up working on that series for Nemeton (based An Rinn) for almost 10 years. I was living in Dublin at the time and I used to stay in An Rinn while we were producing the programmes; that could have been for a couple of months each summer, producing and editing up to five programmes. Nowadays, given the technological advances in the industry from a production perspective, I don’t need to be in An Rinn as much as I used to but my connection to Gaeltacht na nDéise remains very strong.”

She continued: “It’s a relatively small area – An Rinn and An Sean Phobal – and the families who speak Irish there today have been speaking the language for generations and they’ve kept it alive with the support of  Údarás na Gaeltachta. It’s a distinct dialect that hasn’t been overly diluted and it’s great that its distinctiveness remains intact. It remains a largely rural community with Dungarvan just across the bay, taking in Helvick and Baile na nGall as well and it’s a place I’ve got enormous affection for. As a Gaeltacht, it has retained a lovely, untouched quality.”

As Course Director for the Higher Diploma in Television and Digital Media Production, developed by Nemeton and WIT, with support from Údarás, Moira is sharing her industry knowledge with future talent from across the country.

“Irial MacMurchú (Nemeton’s CEO) identified a need for film and media training in the South East – there was plenty of training in Dublin, Galway and Kerry – and given that we’ve the best Institute of Technology in the country in Waterford, developing such a course locally made perfect sense,” said Moira.

“And given that I was working with Nemeton at the time (2006) and had an education in film and television, I was well suited to help to mould a course for the television industry and I’ve been running it since 2016. It has attracted students from all over the country (10 to 12 per year) from as far north as Belfast and just goes to show that you can start something from scratch in Waterford and make a real success of it.”

With a new documentary featuring the recent archaeological finds on Creadan Head (Dunmore East) due to reach screens this year, it’s clear that Moira Sweeney’s affection for Port Láirge is as deep as it is affectionate. May the wind be always at her back – and may the light stay good for the last shot of the day!