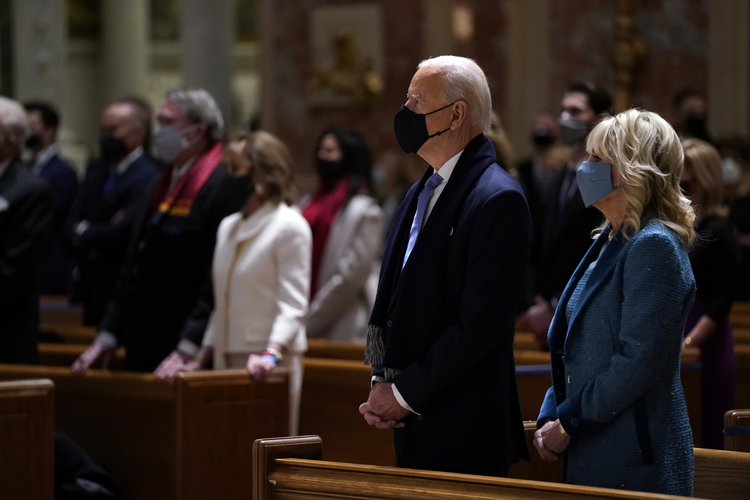 President-elect Joe Biden is joined by his wife Jill Biden as they celebrate Mass at the Cathedral of St. Matthew the Apostle during Inauguration Day ceremonies Wednesday, Jan. 20, 2021, in Washington

FINTAN O’Carroll’s musical achievements are legendary in Waterford. And it’s wonderful to record that, forty years after his early death, his religious music still features on the world stage. Amidst the turmoil of the transition from the appalling Trump presidency to the enlightened, liberal, thoughtful Biden administration, the choice of Fintan’s ‘Celtic Alleluia’ for the inauguration mass somehow slipped under the radar.

Hours before his inauguration as the 46th president of the United States, President-elect Joe Biden, his family, friends and congressional leaders of both parties gathered for Mass at the Cathedral of St. Matthew the Apostle.

The familiar Gospel acclamation, ‘Celtic Alleluia’, reminded everyone of the immigrant roots of this second Irish Catholic president of the United States, inaugurated exactly 60 years to the day after the first. There was an added poignancy to the Cathedral mass as it was also the location of the funeral mass of assassinated President John F Kennedy, the only other Catholic Irish President of the USA. President Biden visited Kennedy’s grave in Arlington National Cemetery just five hours after the conclusion of this Mass.

‘At a time when teachers of instruments were scarce, Fintan embraced the teaching of many instruments, recognising that without his dedication, Waterford would always experience a scarcity of musicians for all the musical activities in the city’

Fintan taught many choirs in Waterford and his music was designed for the real world of the parish choir. Simple but not simplistic, his church music was accessible to all and is widely popular as a result.

Fintan was born in Wexford but moved to Waterford as a child. A gifted musician, Fintan taught music in the Presentation Convent where he encouraged many musicians through his orchestra. At a time when teachers of instruments were scarce, Fintan embraced the teaching of many instruments, recognising that without his dedication, Waterford would always experience a scarcity of musicians for all the musical activities in the city. At one stage every member of the Waterford Festival Orchestra were pupils of Fintan O’Carroll and he was directly involved in the establishment of the Music School in WIT, where he is honoured through the Fintan O’Carroll room and the Fintan O’Carroll WIT Feis. Fintan was one of the architects of the music course and would have taught in what is now recognised as a hugely successful part of the Humanities Faculty of the college. Sadly his untimely death at the age of only 59 prevented his involvement with the Music School.

Despite his enormous knowledge of music, his practical advice was accessible to all and those of us involved in musical productions as performers or directors frequently sought his opinion. A generous man, he regularly saved performers from their worst excesses. I remember one occasion when he placed a brick under the loud pedal of the piano to prevent an over-enthusiastic nun from drowning out players and performers in a school musical. A gentleman to his fingertips, his students adored him and still refer to him as Mr. O’Carroll.

The highlight of his life was the presentation, by Fintan and his wife Josephine, of one of his masses to Pope John Paul II at the Papal mass in the Phoenix Park in 1979. It was a source of great pride to all Waterford people.

His son Kevin has brought together six of his masses on a CD that was released by Veritas with an accompanying book of scores. There was enormous local involvement in the project with local choirs Voci, Ad Hoc Chorale and Madrigallery, soloists Eoin Power and Fintan’s grandson Fintan Scanlon, combining with local organists Eric Sweeney and David Forde in the recording of the six masses at Christ Church Cathedral earlier this year. Sound engineer for the project was Fintan’s son Cian and 10 members of the O’Carroll family were directly involved.

The CD and Score Collection of The Collected Masses of Fintan P. O’Carroll, adapted by his son Kevin O’Carroll, is available from Veritas and is a welcome addition to the canon of Irish Liturgical Music.