“It’s my ultimate dream to lift the cup” 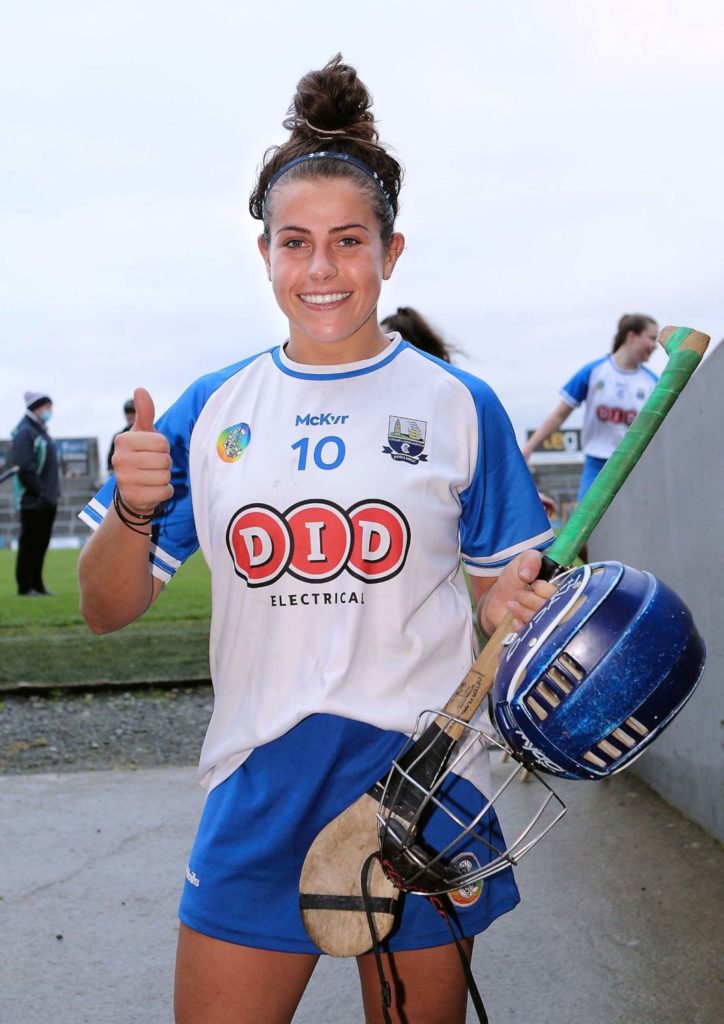 Waterford’s Rockett Woman is shooting for the stars.
The Déise camogie captain wants to complete the full set of All-Ireland medals. Niamh has been part of the inter-county set-up since 2009. Andy Moloney called her up when she was only fifteen.
“It’s my ultimate dream to lift the cup. Me and Claire Whyte have been on the panel since then. Once we have the junior, intermediate and senior, I’m not really sure that there’s any other camogie player in the country that has that, we won’t be seen for a month after that, we’ll go into hiding! That would be the pinnacle. I’d love to win an All-Ireland to be honest with you. My family have supported me so much, my father, my mother, my sisters and my brother. My boyfriend brings me to the pitch and pucks out the sliotars when I’m practicing frees! I’d love to do it for them and make them proud.”
Her team mates feel the exact same way. “We look at the All-Ireland and we get the same Snapchats off each other. Everyone on the panel is like ‘I’d love to win an All Ireland’. I was watching Therese Maher on Laochra Gael and she had some desire to win an All-Ireland, it was unreal. I’d love to get to that stage. I don’t know will I get to that stage but I’ll do everything in my power to be able to do that. When I got my knee injury and I was told that I shouldn’t really be playing, it makes every year all the more special knowing that I’m giving it my all.”

‘VIRTUAL RUN TO CROKE PARK’
Rockett is calling on Déise supporters to get behind their virtual run to Croke Park on February 27. The players will collectively run 240km along the Waterford Greenway. All money raised will go towards senior training costs for 2021 and help them achieve their ultimate goal. All they want is the bare necessities to compete at the top level. “We don’t ask for anything extraordinary. Training in good facilities, getting physios at training, providing for buses, providing for gear and providing for food. If we could get food after a training session that would be brilliant. We don’t get expenses and we don’t get any mileage costs. No one is asking for that, just the standard amount of stuff is all.”
Fundraising for basic facilities year in, year out has taken its toll. “To be honest with you, it’s very draining mentally and physically. I’m not someone that does something half hearted. I really put everything into it and I’d do anything for the girls or the management team or the county board or anyone that’s involved in Waterford camogie. It can be very frustrating. It can take away from your own game and it can take away from your own personal life when you’re answering phone calls and begging, borrowing and stealing just for standard stuff. It really consumes your life. It’s not like you just go training from six o’clock onwards. You’re taking phone calls during the day, you’re taking phone calls during work, you’re asking sponsors and trying to come up with new, innovative ways to try and fundraise. Speaking for all the players, if we could concentrate on playing, it would be a huge weight lifted off everyone on the team.”

‘NEVER GOT GOING’
The 2020 season finished in all too familiar fashion for Rockett and company: another quarter final defeat. That’s three on the trot, the latest to Tipperary. “We never really got going on the day. Looking back on it now, it’s frustrating not performing to the best of your ability. It’s hard to know what’s more frustrating: to not perform to your best and fall short or perform to your best and fall short. It’s hard to figure out in my head which is the worst. There are a lot of things that went wrong on the day and we need to learn from it. We need to progress from quarter-finals and that’s the bottom line really.”
Rockett is in the running for her first All Star award whenever the ceremony takes place. She shot 3-4 from play during the 2020 championship including 2-2 in a player of the match performance against Limerick. The St Annes forward is awesome in the air. Against Tipperary, she plucked a puckout out of the sky and fired over. Earlier in the game, she played a cheeky handpass between her legs to set up a Sarah Lacey score. She is in the form of her life. A string of standout performances on the wing led to All Star nominations in both 2018 and 2019 as well as a trip to New York with the top players in the country.

‘WORKING AND TRAINING FROM HOME’
Collective sessions under new manager Derek Lyons are out of the question until March at the earliest which means that the PE and Maths teacher is working from home and training from home. “We’re doing a lot of road running, a lot of 5K time trials and HIIT sessions. I do a bit of road running but I try to avoid it with my ongoing knee problems so I do a good bit of cycling and I have an off road turbo trainer at home that I’m starting to use inside so that takes a lot of pressure off my knee. My cousin Peter Kirwan has an outdoor gym at his house, it’s only over the road so I’m lucky that he gave me an opportunity to use that. I’m calling in the family friends!”

The virtual run to Croker takes place on Saturday, February 27.

You can donate to the Waterford Senior Camogie GoFundMe fundraiser below: