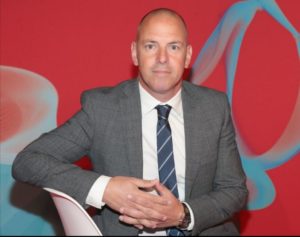 Bill Malone, the Kingsmeadow native and Director of Content at Virgin Media Television.

BILL MALONE’S passion for his trade cascaded down the phone during a lively chat with the Waterford News & Star.

Director of Content at Virgin Media Television since 2016, having previously produced ‘Prime Time Investigates’, ‘The Late Late Show’ and commandeered the RTE 2 Channel Controller’s chair, Bill’s career has been conducted in perpetual motion.

As our conversation proceeded, with the memories and his station’s scheduling highlights flowing in equal and utterly enthusiastic measure, I wondered if the man from Ashe Road, Waterford city, ever disembarks from the TV rollercoaster for some downtime.

“I wouldn’t do a whole lot of switching off, given the industry I work in,” Bill admitted. “My switching off involves watching episodes of ‘The Bay’ last night (now its second season on VMTV) at home. But at the same time, I do keep fit; I kayak, I sea swim, I run, I do keep active – but I’m very passionate about content and storytelling – so when I get a chance to talk about it, I go for it.”

“In my day, I would have written the Waterford Boat Club notes for both the Waterford News & Star and The Munster Express,” said Bill, who was a competitive rower in his youth.

“And journalism was something that always interested me; actually, I would have filled in for Ralph Riegel (Irish Independent) on the entertainment column on the News & Star when Ralph was on holidays. So my interest in writing and journalism goes back to those days; I’d a real grá for English and writing and journalism while in school and (aged 15) I wrote a play for Waterford Youth Arts (titled ‘Fool’s Gold’) back in the day as well.”

From there, Bill studied Journalism in the old Rathmines College of Commerce (now a degree programme at TU Dublin), followed by a post grad in Criminology at what was then DIT Aungier Street – my own alma mater.

Bill’s career began on a freelance footing, filing pieces for The Irish Times and The Irish Press (God rest its soul) and working alongside Paul Howard (Ross O’Carroll-Kelly) and Nicola Tallant (Sunday World) on the ‘South News’ title.

“I’m curious about people’s lives and I love storytelling, the art of telling a story – now I don’t necessarily mean in the sitting by the fireside sense of that – it’s writing, it’s books, it’s film, it’s drama, it’s TV shows, it’s interviews, it’s conversations. A curiosity for the truth and understanding other people: that would have been in my background and that interest in society fed into journalism and criminology: into how people think and work, understanding. the good, the bad; the highs, the lows. Understanding people’s stories and listening to their stories has always been important to me and to society as a whole. Life experience makes up who you are and much of that for me is rooted in creativity in Waterford and maintaining that really strong connection to home. And then the experience you build up over time further informs you.”

Bill’s RTE career, where he began as a researcher with ‘Kenny Live’, extended to almost 13 years before moving to VMTV.

“All the time I was there, I was evolving and learning. I believe you need to stretch yourself; if you’re too comfortable, then you’re not progressing. I’m someone who likes to progress, who likes to move and learn and in this (Virgin) job I’m learning so much every day and that’s where I want to be.” 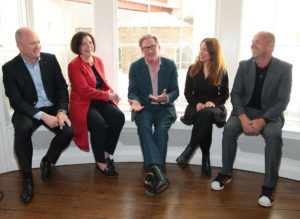 Bill told me: “At RTE, I changed jobs, learned new skills and stretched myself all the time and I’ll be honest: I always had an eye on TV3. It wasn’t a specific itch that needed scratching but I’d always felt there was fantastic, untapped potential in TV3 and that it could be brought to an amazing place. So that was really the impetus to make the change. And now as Director of Content, across the entire platform – from rebranding to Virgin Media Television, to launching new channels, revamping our Player and effectively becoming a streamer – it’s been an incredibly busy and enormously satisfying few years. It’s been a real, dynamic change in how we do business. This is uncharted territory for broadcasters and we’re going into a very exciting space. Growth and evolution are elements I’ve always considered and striven for in everything I do, be it in work or personal development.”

Due to the Covid restrictions, Bill (who lives in Greystones) has seen his mother only once since the outbreak of the pandemic, adding “we speak the whole time on Facetime!”.

As a witness to the 2004 Indian Ocean tsunami (along with wife Elke, his then girlfriend), has surviving the ravaged Thai resort of Khao Lak helped to personally contextualise the past year’s national upheaval?

“On that 10k stretch of coast around Khao Lak, close on four thousand people died. I was there, I was hit by the wave and I managed to survive. For me it wasn’t necessarily life changing but it did give me context. Having kids is life changing – you can’t ‘un-have’ kids. But if that experience gave me anything, it told me not to sweat on the small stuff. Some things are in your control and you can affect change. Those things that are not in your control, you just have to accept that. Look at what’s inside your control and make that happen.” Amen to that, Bill.