‘Who are we and what do we want Waterford hurling to be?’ 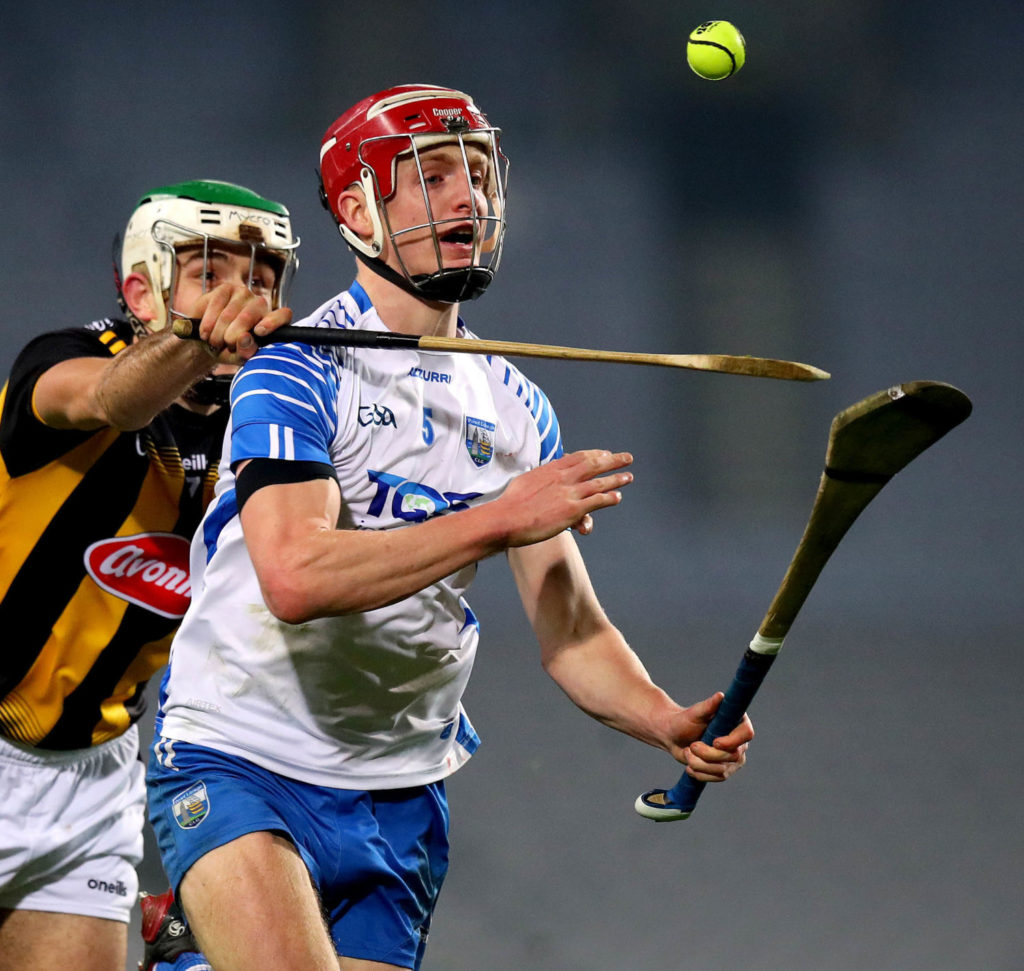 Calum Lyons just wants to win things with Waterford. Simple as that. Here he was on one of his trademark runs against Kilkenny in the 2020 All-Ireland SHC semi-final in Croke Park. Photo: Inpho.

The Waterford hurlers received plenty of plaudits for their 2020 wins over Cork, Clare and Kilkenny and appearing in the Munster and All-Ireland finals but they have no intention of resting on their laurels.
One of the stars of last year’s campaign and now an All Star nominee, after just his second senior campaign, was Ballyduff Lower wing back, Calum Lyons and he has big hopes for the years ahead.
Since breaking into the Déise team in the 2019 National Hurling League under then manager Paraic Fanning, the 24 year-old has been superb and he also chipped in with 1-6 from play in the 2020 championship, including a goal against Cork in Thurles.

‘TIME TO PUSH ON’
Lyons was this week speaking to the New York GAA Winter Webinar Series.
“It’s time enough that Waterford pushed on and started to win a bit of silverware and that alone has me motivated,” he said.
“I’m mad to win. Prior to last year, I hadn’t won any championship game with Waterford – minor, senior or U-21 – it’s just been heartache after heartache and I’ve always been questioning, ‘Jesus, what’s the point like?’
“In my first season in 2019, not only did we not win any games, but we got absolutely annihilated in every single one of them and that can go one of two ways, it can push people over the edge and they can just say, ‘Ah, I’m not doing this anymore, we’re after getting hammered in all our games’.
“We got beaten in Walsh Park, our own home ground, by 20-something points by Limerick in 2019 and that was probably the lowest point in my life in terms of hurling. I remember saying after that that it’s going to go one of two ways for next year.
“You either cop yourself on or you throw the hat at it and as a group we said, ‘we’ll have a go at this now’. We weren’t that bad, we knew we weren’t that bad to be getting hammered like we were and it was just a matter of us pulling up our socks and saying, ‘who are we and what do we want Waterford hurling to be?’
“Prior to last year, there was a negative talk around Waterford hurling and I definitely wanted to change that. Motivation comes from that, wanting to win, the will to win and the love of the game as well.
“My whole life I’ve wanted to play for Waterford and now I’m here so I might as well push myself to be the best that I can be for Waterford.”

‘WICKED FOR OVERTHINKING’
Lyons has credited Waterford manager, Liam Cahill, with “instilling me with a lot of self-belief” before detailing his battle with “anxiety in the game” and the effects it had on him during his younger years.
“I was starting on the U-21 team in 2017 and then I was dropped in 2018 when I was up to the age, and I was rightfully dropped. I’d be overthinking the life out of it and a lot of lads always take the p*** out of me, I’d be wicked for overthinking.
“There’s a level of anxiety in hurling that a lot of people don’t see and I recall seeing a ball when I was playing U-21 and thinking, ‘Oh my God, oh my God, all I want to do is play for Waterford, don’t mess this up, don’t mess this up’.
“I’d see the ball in front of me and then I’d start going, ‘Oh my God, oh my God, there’s the ball, there’s the ball’ instead of just going over to it and picking it up. No one else knew what was going on only myself.
“I went over to Boston then in 2018 when we got knocked out of the U-21 and when I came back I realised that there’s seven billion people in the world and only about 0.01 of them even know that this match is going ahead. ‘Why are you overthinking it?’
“You start to realise about this whole new world in America and how big the world is. When I was playing with the U-21s I was thinking, ‘Jaysus, there’s seven billion people watching this now and if you make a mistake here now the whole world is going to think you’re useless’.

‘NOT WORTH LOSING SLEEP OVER’
“Kieran Bennett gave me a good bit of advice because I remember the first league match in 2019, my first ever competitive game with Waterford, and I told him I was absolutely shaking in the bus on the way up. I asked him did he get nervous and he said ‘it’s not worth losing sleep over.’
“That always stuck with me, I try to remind myself that if you’re losing sleep over it, you’re in trouble. Overthinking had a very negative effect on my hurling career growing up and it was something that really stopped me from performing.
“I had all the practice done and when I went out onto the field then I froze because I was just overthinking and I was anxious. Managing your sports psychology is very important.
“If you have the practice done, just go out and show it and believe in yourself. It doesn’t matter who’s in the stand or who’s behind the camera watching, go out and go at it.”
Let’s hope we get to see Calum and his Waterford team-mates back on the pitch in the not too distant future.