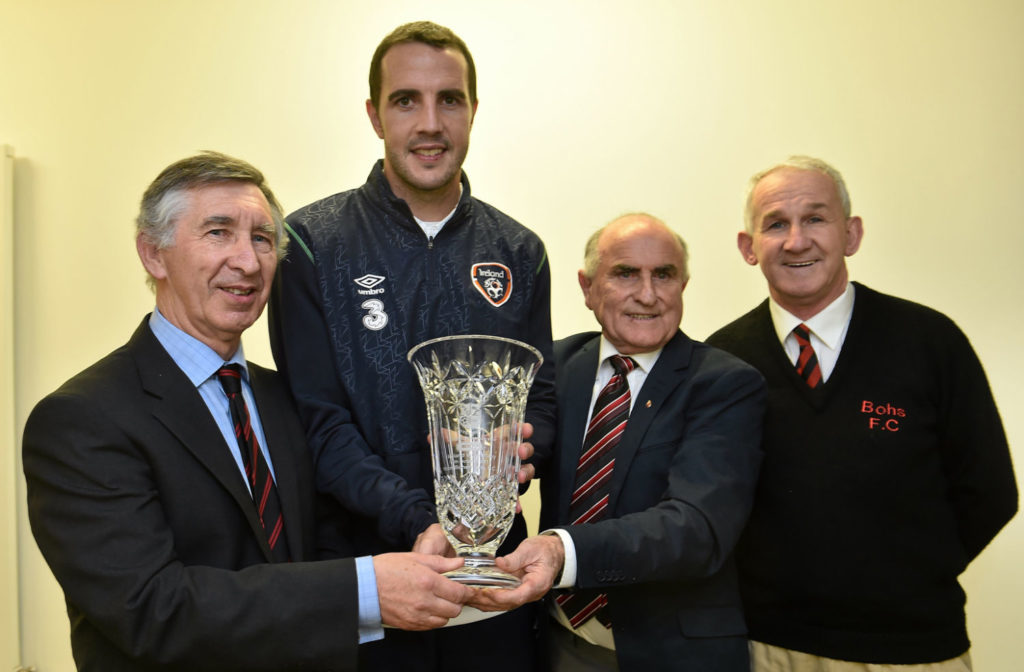 Recently Ritchie Elliott stood down as chairman of Bohemians Football Club. It marked the end of a remarkable achievement and the end of an era. After 68 years of total dedication to Bohs Ritchie has decided to retire from the game and from the club he loved all his life.
When he informed me that he planned to step aside, I really couldn’t believe my ears. The man who taught me everything I know about the game was calling a halt. The man who was responsible for helping so many young players in Waterford move to a higher level, would no longer be there to offer advice. The man who influenced so many young men and women to take up coaching had finally called it a day. His career in the beautiful game over the last 68 years just had to be told. As a player, coach, manager and mentor they didn’t come much better than Ritchie Elliott. Never one to seek the limelight I was delighted Ritchie allowed me to tell his wonderful football story on his behalf.

BEN WADDING KNOCK
He joined Bohs as a 12 year old, he still speaks of his delight when recalling the day that Ben Wadding knocked on Paddy and Masie Elliott’s door at Ignatius Street in Waterford City and asked their permission for Ritchie to join Bohs. From that moment, Ritchie had Bohs blood in his veins, something he still carries to this day. He was always going to be a winger. His hero as a schoolboy was Tom Finney of Preston North End and England. Ritchie made a big impression at Bohs right from the start, as he hit five goals in Ozier Park against Glenville to help Bohs win their first Under 15 League in the club’s history.
Even as a young lad Ritchie would take part in the club’s AGM and he was highly influenced by Ben Wadding and Jimmy Cooke. It was Ben Wadding who opened Ritchie’s eyes to the world of coaching. Ben travelled to England in the 60s before there were coaching structures in Ireland and gained a full FA coaching badge. Ben Wadding was the first Irish man to gain such a distinction. In addition to club administration Ben managed and coached clubs teams at all levels with Bohs. It was a route Ritchie would travel in later years.

TWO OSCAR TRAYNORS
Even as a youth player and despite winning many honours with Bohs, Ritchie had one eye on coaching and trying to help the younger players in the club. His Junior career took off when John ‘Fatty’ Phelan selected him for the Waterford Oscar Traynor Cup team. Waterford won the competition in 1964 and again in1965 and Ritchie played on both teams. The great Paddy Coad took Ritchie to Kilcohan Park to join Waterford FC in 1965. At the same time Ritchie was picked to represent the Republic of Ireland amateur side against England in Birmingham on April 15, 1965 and to add to the dream he scored on his debut.
Back at Kilcohan Park in a League Of Ireland clash against Cork Hibs a bad tackle by Jackie Morley ended his League Of Ireland career. Even when playing with the Blues Ritchie was still deeply involved with Bohs as a coach and a committee member. 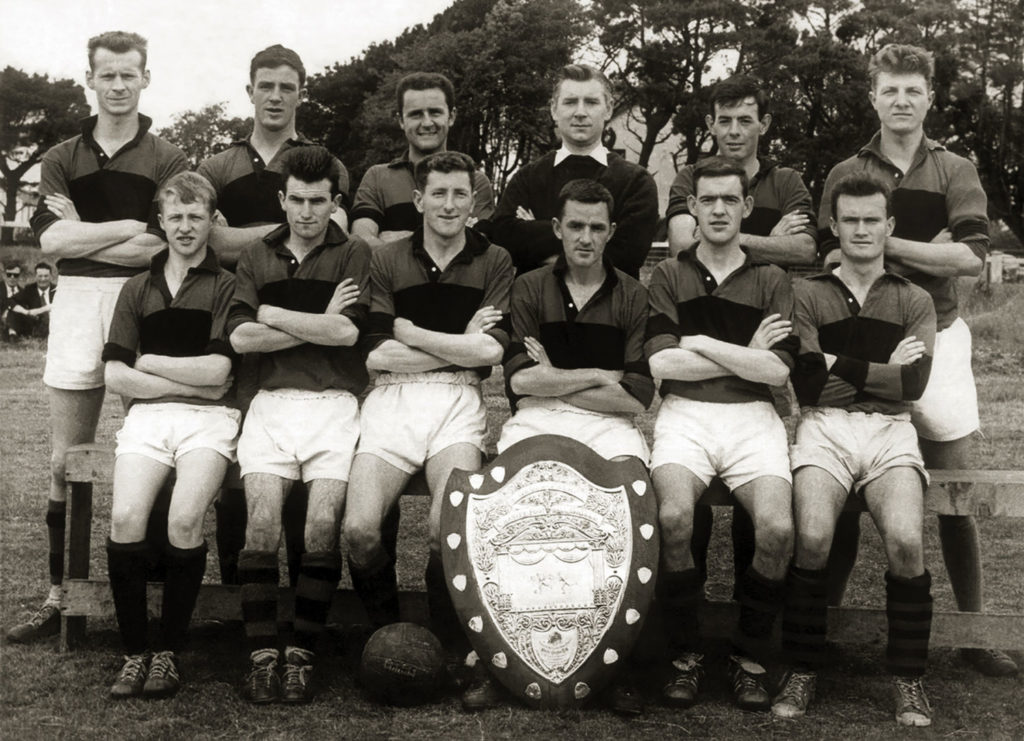 Ritchie (second from left, front row) as part of the Bohs team that were George French Shield winners in 1960.

After recovering from injury Ritchie returned to Bohs and continued to play a major part in the Clubs success. The World Cup of 1966 was in progress when Ritchie travelled to Newcastle to take his FA Coaching badges as there was still no coaching structures in Ireland. Also on the course were John Jarman and Ted Robledo an FA Cup winner with Newcastle United. The course was run by top FA Coach Charles Hughes and Jackie Millburn former England International was the FA observer. Waterford FC took full advantage of Richie’s coaching credentials and appointed him as coach and manager of the Waterford ‘B’ team. Many top players went through his hands in that period, Derek Chestnut, Johnny Keane, Nicky Denn, ‘Yammy Keane’, Tony Dunphy to name but a few. Ritchie’s coaching clinics continued in Poleberry Park as clubs sent their top schoolboys to Ritchie for one to one coaching.
When the ‘Glory Years’ ended in Kilcohan in the middle 70s, the whole under age structure and coaching of young promising players went with it. His love for Bohs continued as he took over as manager of the Premier League team and Ritchie took many of those Waterford players back to Bohs with him. 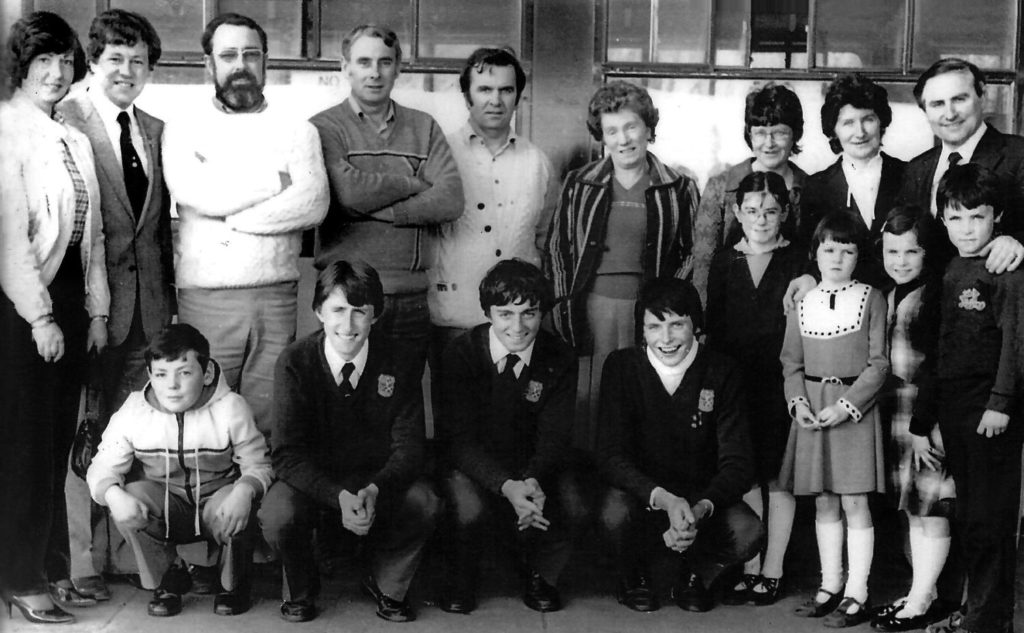 Ritchie and the rest of the Waterford contingent after returning to Waterford after helping Ireland to victory in 1982.
In the 1980s the Republic of Ireland came calling and Ritchie took over as manager of the Irish International U-15 team that went on to become the first Irish team to win an International trophy in France 1982. This quote was taken from the Irish Independent newspaper at the time.
‘Quite often it is a great day for the Irish but on Monday the12th of April 1982 must surely have been the greatest of them all as far as soccer is concerned. On that Monday afternoon at Montaigue, in France, Ireland became the Schoolboy U-15 Champions of Europe by virtue of their penalty shoot out victory over Italy. Despite the fact the final game was decided on penalties there was absolutely no doubt that Ireland were the most outstanding team in the entire competition. The Irish team came out on top thanks to a huge contribution made from the Waterford coach Richie Elliott, his tactical awareness had a major bearing on this Irish victory. On the field of play Martin Russell was Ireland’s best player, also Mark Breaton another Dublin lad was outstanding throughout the competition.
However Waterford’s Anthony Kelly of Bolton played the left back position to perfection, defending well and always looking to counter attack. This great success of our schoolboys must surely be regarded as a real triumph for our coaching and management staff. Few people are fully aware of the vast amount of work which goes into the preparation of a representative side. Weeks and months are spent searching for players with talent. The unselfish coaches mould the skills of this top class squad.
In their preparations the Irish Schoolboys followed the pattern we have mentioned. Managers and coaches seldom receive praise they deserve but on this occasion special mention must be made to Richie Elliott the Waterford coach who was always one step ahead in his team selection and his substitutions at the right moment and he gave the opposition plenty to think about. He was assisted by Vinny Butler his coaching colleague. Neither of these gentlemen spared themselves to bring out the best in our boys. Off the field of play two more Waterford men played a blinder. Willie Moran Chairman of the SFAI made sure that whatever the players or coaching staff requested, Willie provided. John McLoughlin Secretary of the SFAI had come from good stock in Waterford and his knowledge the logistics and his organisation skills played a huge part in this success’.
The Mayor of Waterford Cllr. Tom Brown said at the homecoming at Waterford City Hall, ‘The pride that the Irish people felt when the news came through that Ireland were ‘ Euro Champs ‘82’ and the pride that the Waterford people felt to know that these six Waterford people were to the fore in this outstanding victory. To you Ritchie Elliott who was the brains behind this victory, Mr. Elliott your dedication to these young players has to be admired and you have changed the face of football in Ireland forever.’
For the record the Waterford players were: Anthony Kiely (Bolton), Brian Foley (Bolton) and Martin Dunphy (Bohemians),

MANAGER OF WATERFORD TEAMS
Ritchie went on to coach and manage Waterford Oscar Traynor Cup teams, Kennedy Cup teams and Waterford Development Schoolboy squads and Waterford Inter League Youth squads. He was eager to pass on the knowledge he gained and introduced plenty of young coaches into the game including Nicky Denn, Paul Power, Gary Coad, David Whittle and Shane Nolan.
Richie also played a huge part in the careers of Jim Beglin, Brian Murphy, John O’Shea, Eddie Nolan, Giles Cheevers, Brian Murphy and many more players from the city and the county. 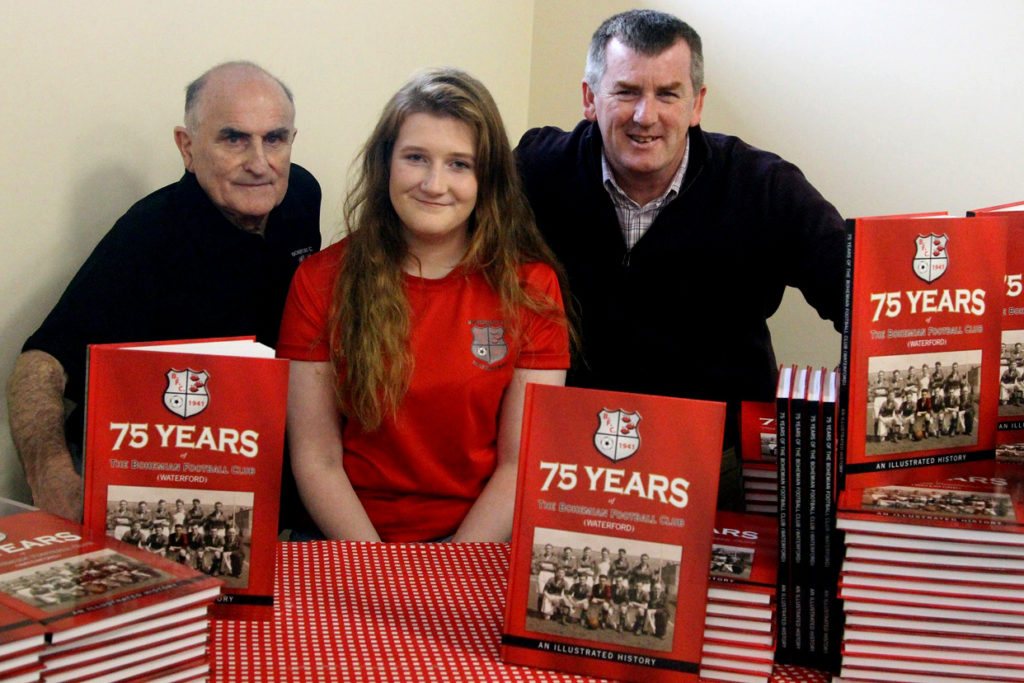 At Ben Wadding Park last Sunday to launch of the book The 75 year History of Bohemians FC were L to R: Richie Elliott (author), Mollee Keogh and Ollie Keoghan.

Back at Bohs Ritchie he took up a role of Chairman and had the foresight to see the schoolboy section of the club needed a revamp and helped set up the Bohemians Schoolboy Academy which has become a huge success. He combined with his lifelong friend Tommy Drohan (RIP) and another good friend Michael Wadding (RIP) to open the new look Ben Wadding Park complete with new dressing rooms, all weather training area and a brand new playing surface.
Ritchie also showed a huge interest in the Waterford Girls League and was a frequent visitor to Ben Wadding Park to watch the Bohs girls in action. The Bohs Summer Camps was another passion of Ritchie’s every June Bank Holiday 2eekend he would join over 200 boys and girls in two days of fun and football and he would stay for hours to meet every child and present them with their medals of participation. His love of the game and his love for Bohs will not keep Ritchie out of Ben Wadding Park, however it will give him a chance to spend more time with his family. Enjoy your retirement and I look forward to picking your brains on football matters for many years to come.