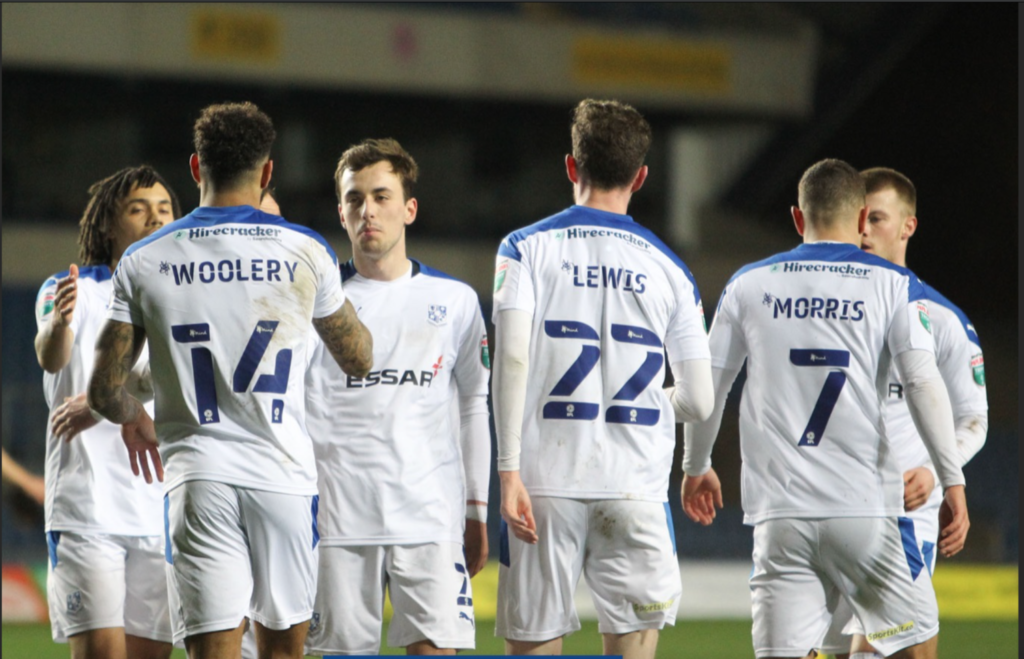 Waterford’s Lee O’Connor celebrates with his Tranmere Rovers team-mates after the opening goal in their great win over Oxford United tonight in their EFL Trophy semi-final.

Lee O’Connor is on his way to Wembley with Tranmere Rovers after the English League Two club produced another major shock to overcome Oxford United in their EFL Trophy semi-final at the Kassam Stadium.
After missing the early part of 2021 due to Covid 19, the Republic of Ireland International has bounced back with two outstanding performances to help the Merseyside club to a final showdown against either Sunderland or Lincoln City.
O’Connor played the whole 90 minutes for Keith Hill’s men where he was in contention for the Sky Sports man of the match award as he dictated the play for his side, and now can look forward to a final date on March 14.
It was a big win for O’Connor and co after their brilliant win in the last round against highflying League One side Peterborough United, and against the odds once again, they defeated another side a league above them.
A goal in either half was the difference at the final whistle with the first goal arriving on 35 minutes through Kaiyne Woolery, who pipped O’Connor to the man of the match accolade, and the crucial second coming from Kieron Morris midway through the second-half.
The Tranmere goal did have to survive a number of scares in the second-half with the home side rattling the post and the crossbar when the game was in the melting pot at 1-0, but that second goal from Morris paved the way for the trip to the capital.
O’Connor, who is currently on loan at Prenton Park from Celtic, will now be hoping that he can be part of the Tranmere team for the final as the Merseyside club go in search of another major scalp next month.