A LOCAL business-owner has hit out against Waterford Council and the contractor for the public realm works in Tramore as almost a full year later, the road is still closed. Billy Cowman and his wife Frances own Megabites and An Caife on Main Street and for the bones of a year, a dug up road and fencing has faced their front door. 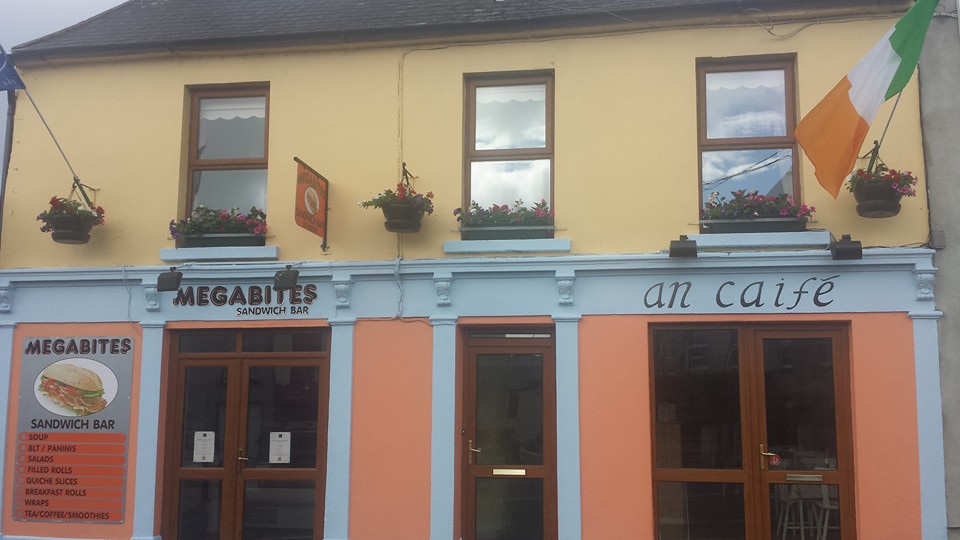 “However, a massive project and contract like this, regardless of lockdown, most of the time it was three men maximum working on the project. No effort was made to speed the work up with additional workers. To close down the centre of a town like Tramore, a major, if not the major seaside resort town in Ireland, for last summer and realistically this summer again, to me, it doesn’t make any sense.”

Waterford Council issued a further road closure notice last week to advise that Main Street would remain closed until August 25. Also last week, further works were undertaken and the footpaths were taken away outside Boots Pharmacy, meaning anyone who wishes to go there cannot go down Main Street, but must go up the hill on the opposite side before crossing over. Billy Cowman criticised Waterford Council and Niall Barry & Co contractors for their failure to erect adequate signage or to advise people as to what is happening on a regular basis.

“Hand on heart I can say we never had any notice from the Council or from anyone. In particular, signage is severely lacking. During the week, the Main Street was completely closed again and people were driving down thinking they could get through. Instead they’re turning around again in the middle of the road. Elderly people were coming down in their cars, and then trying to reverse their cars while other cars are coming down behind them. It was a mess. All it needed was one large sign to say that Main St is closed completely. I know they have a sign saying local access only but sure that could mean anything at all,” said Billy. 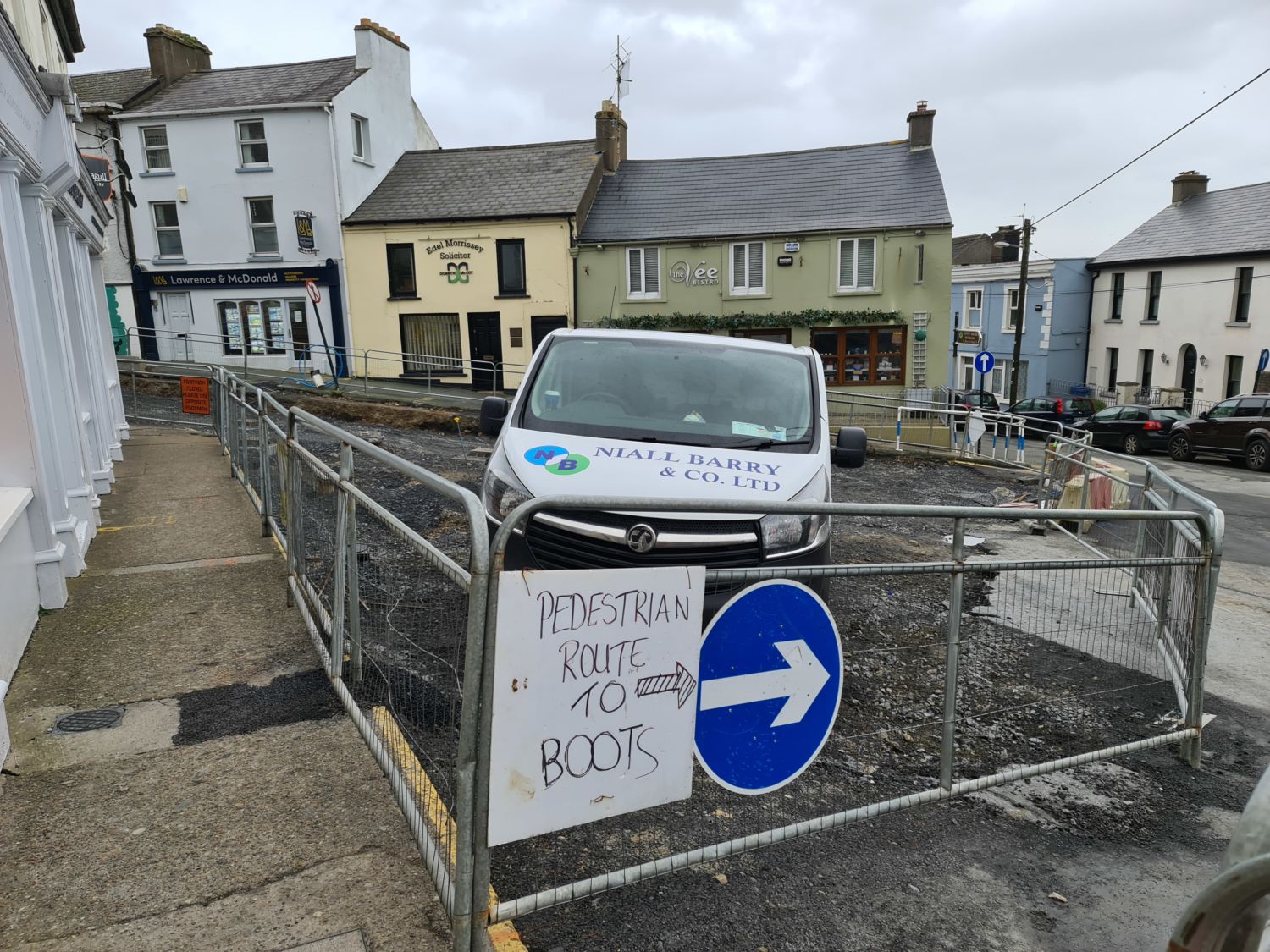 Last week, on arriving at work, Billy noticed that the water was switched off. Like many businesses, water is essential to its operation in terms of the coffee machine, cleaning and more. He observed workers outside working on a pipe and they advised that yes, the water was off and would be for another few minutes. Those minutes turned to hours and it was 12 o’clock before Billy could access any water for work.

He stated that as a business owner and resident, he feels that all those with a responsibility for decision making where the public realm works are concerned are showing a total disregard for people and their businesses.

“We are never told anything so I don’t know how far up these road works are going to go, where they are going next or how long each stage is going to last because there is no communication.

We are probably lucky that we are where we are because there is a little bit of parking around here, and some kind of access to where we are, but we have absolutely been impacted by the duration of the road works.

“People at the bottom of the town are not making the trip up here because you need to find your way up. You need to take the long way around and people just aren’t going to do that. My major gripe is for the last year it has been three men working on a major project like that. This is the first week where I see more than three workers on the site, perhaps there is some kind of a push going on. If people want a takeaway, they will navigate to where they are collecting it as quickly as they can, and back home again. If you can’t offer that to people, you can forget about it because your business is going to really suffer. We have definitely suffered.”

Last summer, there was a reported reduction in footfall at the top of the town. With the government push on the importance of holidaying at home, Tramore was a choice destination for many. However, Billy dreads another summer where the road is dug up and closed off, because he feels it doesn’t matter how many are in the town, if they don’t know their way around, they won’t know the how to reach the top of the town without driving along the Main Street.

“I think it all kicked off when they introduced the one-way system years ago. That was the bones of 20 years ago, the Council took no notice of the business owners on the street then and they aren’t listening now. To me, they are coming up with this one cap fits everything solution and it just does not fit.

“To have a pedestrianised area in a town like Tramore is just nonsense. There are a few businesses which might suit the pedestrianised model but to me it’s all about access again. You need to make it easy for people to go up the town, and right now it is not.”

Billy confessed to still not knowing whether the final plan involves an Applemarket style design for the town with cars, or whether it will be completely pedestrianised. However, he supported his scepticism for the work being done by referring to Arundel Square in Waterford city which he terms “a ghost town” since it has been pedestrianised.

“It’s depressing enough with Covid but when you’re coming in to work to look out at a building site for the last year that doesn’t seem to be moving anywhere, it’s hard to be positive.”

Waterford News & Star contacted Niall Barry & Co, contractors for the Public Realm Works. In response to the claims that a small staffing has been present on site, a spokesperson for the contractor said, “Adequate resources have been allocated to the works at all times. Many of the tasks are carried out by small gangs at various locations simultaneously.” The spokesperson also said that, “the contractor’s site manager is in full time contact with businesses and residences and addresses issues within the contractor’s remit when they are brought to his attention.”

They stated that all signage throughout the works is designed and inspected by the contractor’s Health and Safety consultant.

Waterford Council expressed their regret that the works have been delayed and extended for longer than anticipated, acknowledging that another summer period will be impacted in Tramore. In a statement to this newspaper, Waterford Council said: “it should be noted that Waterford Council recently negotiated the inclusion of the public realm works as essential, which allowed their resumption during the current level 5 restrictions. Delays occurred in 2020 due to an extension of the schedule of works by Irish Water to improve necessary infrastructure. The Council will be working with the contractor and local business to ensure that disruption to business in the area is minimized where at all possible and that local access is maintained to the greatest extent during this period.” 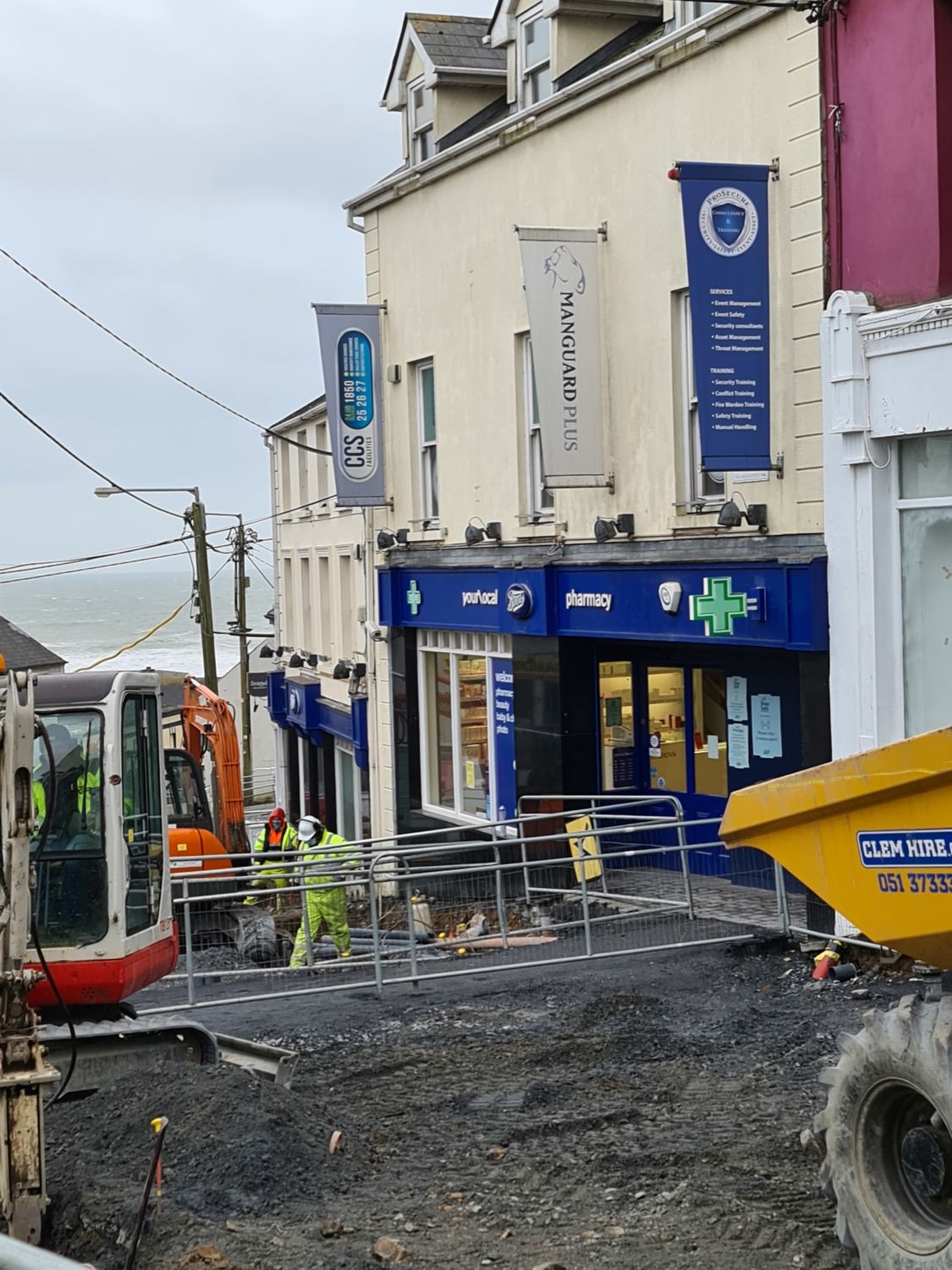