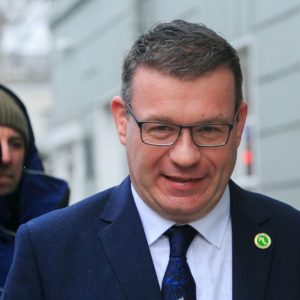 Alan Kelly received confirmation this week about a new Early Intervention Centre for children in Waterford.

MINISTER for Health Stephen Donnelly has confirmed that the development of a Multidisciplinary Early Intervention and Respite Care Centre for children with complex additional needs in Waterford has been approved for inclusion on the HSE Capital Plan 2021. Minister Donnelly was replying to a Parliamentary Question by Labour TD Alan Kelly. The project, earmarked for HSE lands on the grounds of St. Otteran’s Hospital in Waterford, includes a replacement facility for the Sacred Heart Centre (currently located at Lady Lane in the city centre). The HSE have been working in partnership with the “Touching Hearts” group to progress the proposal.

Established by parents and their supporters in 2017, the main aim of “Touching Hearts” is to support the building of a new centre for children with physical and intellectual disabilities in Waterford. The group have been actively fundraising towards the project.

Deputy Kelly (who is also his party’s Health Spokesperson), met the “Touching Hearts” group in Waterford last year and has been working to progress the project in the meantime. The Labour Leader, who was anxious that it feature on the HSE’s Capital Plan, sought an update by way of two recent Parliamentary Questions to the Health Minister.

In a Reply (issued 18/2/21) describing the Multidisciplinary Early Intervention and Respite Care Centre for Waterford as “an important and significant project”, Minister Donnelly indicated to Deputy Kelly that “it was expected” that the plans for the centre will go to tender in late 2022 subject to available funding. Minister Donnelly added that commencement was envisaged in 2023 of a construction programme lasting for a period of 18-24 months.

Alan Kelly TD, in welcoming the detailed update from the Minister said that the centre was “must needed”

“The building of a Multidisciplinary Early Intervention and Respite Care Centre for children with complex additional – inclusive of new state of the art accommodation for the Sacred Heart Centre – can be achieved and we now have a framework to work from,” Deputy Kelly said.  “As alluded to in the Minister’s reply to my PQs, however, the challenge to secure funding and corresponding priority for this project remains. My party colleague in Waterford Richard Finnegan introduced me to Dermot Dooley and the Touching Hearts group last year. They are an inspirational collection of people and their dedication to the requirements of children with complex additional needs left a lasting impression on me. The case being made for the centre by Touching Hearts and the HSE locally in Waterford is one the Labour Party including through our four councillors John Pratt, Ger Barron, Thomas Phelan & Seamus Ryan will be pushing strongly. In the short term, we’ll be looking for funding for its design stage, so to ensure it meets some of the timelines set out in the Minister’s reply.”