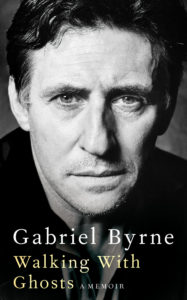 IRISH actor, Gabriel Byrne recalls with stunning lucidity and precision, his working-class childhood in Walkinstown, Dublin 12. The eldest of six children, his upbringing in humble circumstances is recalled with tremendous affection. The eldest son of a soldier and a nurse, Byrne was heavily influenced by the culture of the time and the suggestion that to hear God calling you for a vocation was an admirable calling. It was with that certainty that he left home at the mere age of 11, to cross the Irish Sea to enrol in an English seminary.

He was expelled four years later and he returned home, sullen, trouble-making and with a worrying lack of apparent prospects. What his parents saw were the drunken bouts, the cigarette smoking and the constant socialising. What they did not see was the grief and shame he had buried inside, following clerical abuse in the seminary where he lived for four years.

He deftly handles such sensitive and triggering recollections, yet there is an extreme sense of disconnection. It could be argued that the Dublin man has distanced himself deliberately from the pain of his past, his alcoholism, and it is with the distance of the Atlantic Ocean between him and Dublin, that he penned his memoirs.

Yet, maybe it isn’t fair to claim that statement in its entirety because he vividly recalls the pockets of imagination which existed for him in childhood. In his dreams, he returns to the golden Dublin hills and the pink cardigan of his first love, Mary Foley. He conjures the innocence of a young boyhood, riding invisible horses through the Wild West and of Bill the Barber, who wore wigs for over 50 years.

Although the book spans his career from The Riordans, to The Usual Suspects and beyond, the memories are recalled in an off-hand manner, entirely free of any self-importance. The writing was a very pleasant surprise because while the content of the book was riveting in the way that the lives of others usually are, the words themselves lent a significance to each memory.

Each character from the Ireland of his childhood was faithfully restored on the pages; Mrs Doran who lived alone in the ruin of a small cottage; Mrs Kelly who was the first to get a hoover and who liberally used it while wearing fluffy slippers and a housecoat, and a priest in a retirement home who had no memory anymore of who he was, nor what he had done.

In less than 200 pages, Gabriel Byrne offers the reader a glimpse of the many ghosts one carries throughout life. Faces like Mary Foley and her pink cardigan, Mrs Doran whose husband never returned, his own sister who died having suffered painfully with her mental health and many more follow Byrne like ghosts throughout his career.

His career is littered with a vast collection of accolades and, yet, he remains unaffected. In many ways he is still the boy who moved house in the rain by pushing his things in a pram over the bridge with his mother. This was a cultural and historical time capsule of a book written with humility and art.

Available to purchase from The Book Centre