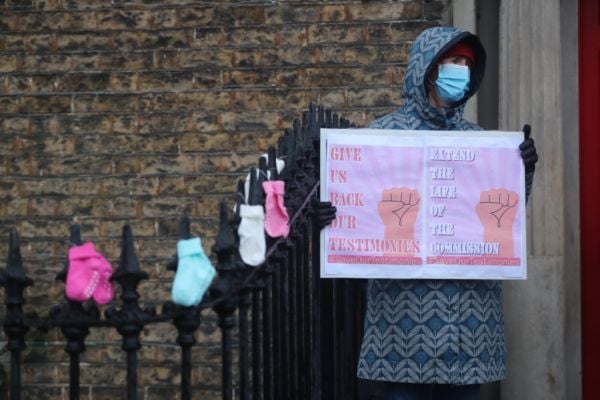 The Government is coming under pressure from within its own ranks to provide a free vote on extending the lifetime of the mother and baby homes commission.

As the Irish Examiner reports, Fianna Fáil TD Niamh Smyth has urged her party leader Taoiseach Micheál Martin to directly intervene to ensure the commission is not wound up at the end of this week.

Children’s Minister Roderic O’Gorman said he is still awaiting legal advice on whether the commission can be extended to allow for a full investigation into the destruction of witness recordings.

Mr O’Gorman will again write to the commission tomorrow to ask that back-up files which were found last week are handed over to his Department so they can be forensically examined.

The Commission confirmed last Thursday that disaster recovery files, which could contain the 550 deleted recordings of witness testimony, had been found.

Mr O’Gorman immediately responded and asked that it provide more information within 24 hours. However, he has yet to hear back from it.

Social Democrats TD Holly Cairns hit out at the Minister for refusing to extend the commission’s term and for not acting with greater urgency.

“For you to send a letter to the commission when you consider the level of urgency, would you not pick up the phone? Would you not send your team to go over and get those so-called disaster tapes to see immediately if there is anything left there?

“Once this commission dissolved there will be nobody left to answer questions and, at the very least, at this point survivors deserve answers, they don’t need these nonsense replies.”

She said the commission has been extended multiple times over the five years that it carried out its investigation, but now a similar request from survivors is being denied.

A Social Democrats motion to extend the commission is expected to get widespread support from the opposition when it comes before the Dáil on Wednesday.

Ms Smyth said: “I made my views clear to the Taoiseach at our PP last week that the commission should be extended to ensure survivors testimonies are retrieved.

“I will say the same and re-emphasise that point to the Taoiseach this week. I am hopeful that will be achieved. If not I will seek a free vote on the issue,” she said.