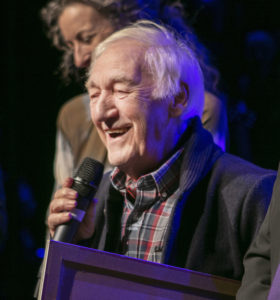 In response, party colleague Cllr Adam Wyse (FF) who chairs the Council’s Housing & Culture Special Policy Committee (SPC) that a consideration to honour the late Mr Manahan was on the SPC’s agenda.

This news was welcomed by both Cllr Murphy and Metropolitan Mayor Davy Daniels (Ind). Mayor Daniels also tabled a vote of sympathy to Mrs Mona Manahan and her family on the loss of “a most talented member of a well-known Waterford family”.

Mayor Daniels told colleagues: “Des was an excellent actor in both drama and musicals and he really was legend here in Waterford, after decades of performances at the Theatre Royal and his reputation extended countrywide. He also had a great reputation for helping up and coming actors and I know all of us as a Council would like to extend our sincere sympathy to Des’s family.”

Cllr Mary Roche (Ind) added: “Des excelled in the really important things of life, love and art and he will be an awful loss to the artistic community in Waterford.”