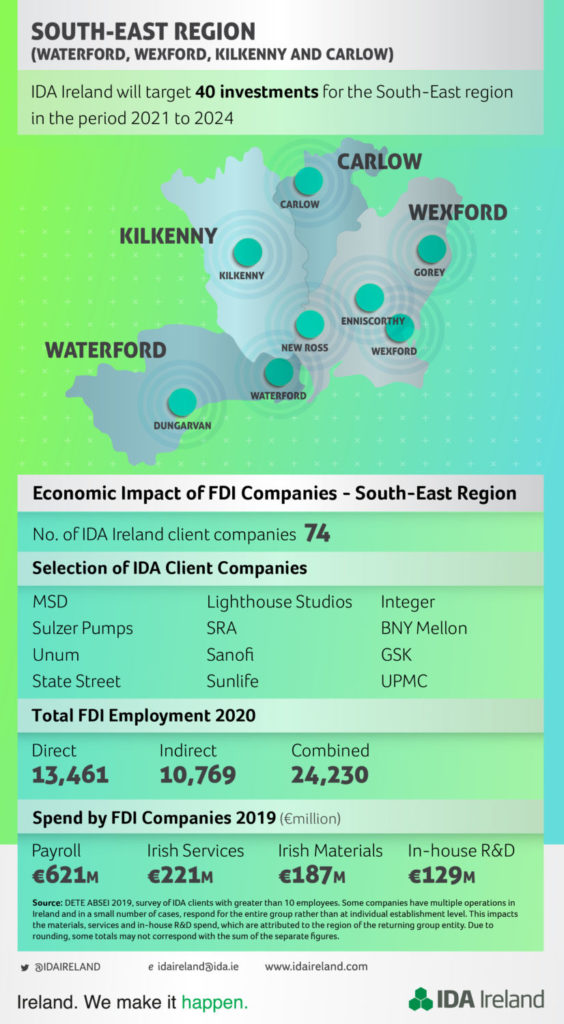 YEAR-ON-YEAR employment figures among IDA Ireland’s client companies in the South East rose by 2.8 per cent during 2020, despite a year dominated by the health, social and economic consequences of Covid-19.

In an interview for our Life Science, Technology & Manufacturing Supplement, which will feature in this week’s print edition, IDA Ireland South East Manager Brendan McDonald said such employers had proven “incredibly resilient” over the past 12 months.

“This growth confounded the situation that we found ourselves in, given that we had FDI (Foreign Direct Investment) companies, in this region, adding jobs, which is obviously fantastic from our perspective,” he told the Waterford News & Star.

This has maintained a recent trend among FDI companies in the South East, which has recorded employment growth of 24 per cent over the past five years.

Said Mr McDonald: “Our focus on regions will continue in our new strategy – our objective is to win half of the 800 (national) target investments for regional locations over the next four years – with 40 of those earmarked for the South East.”

With 10,000 people working in the Life Sciences across Waterford, Kilkenny, Wexford and Carlow, Mr McDonald said the region was now recorded “globally significant” numbers in this sector.

“And then factor in the other clusters in the region, be it High Value Engineering, International Financial Services and, of course, the growing Tech cluster in which we now have some of the more globally significant names based here in the South East.

For example, Uber acquired (the Waterford-based) Routematch and now have a Technology Centre here in Waterford and you’ve also got IBM who took over Red Hat (on Waterford’s

Cork Road) which in turn had taken over Feed Henry, which was a spin-out from TSSG (WIT) so the ecosystem is certainly here and it’s working; it’s showcasing what can happen when the right building blocks are put in place.”