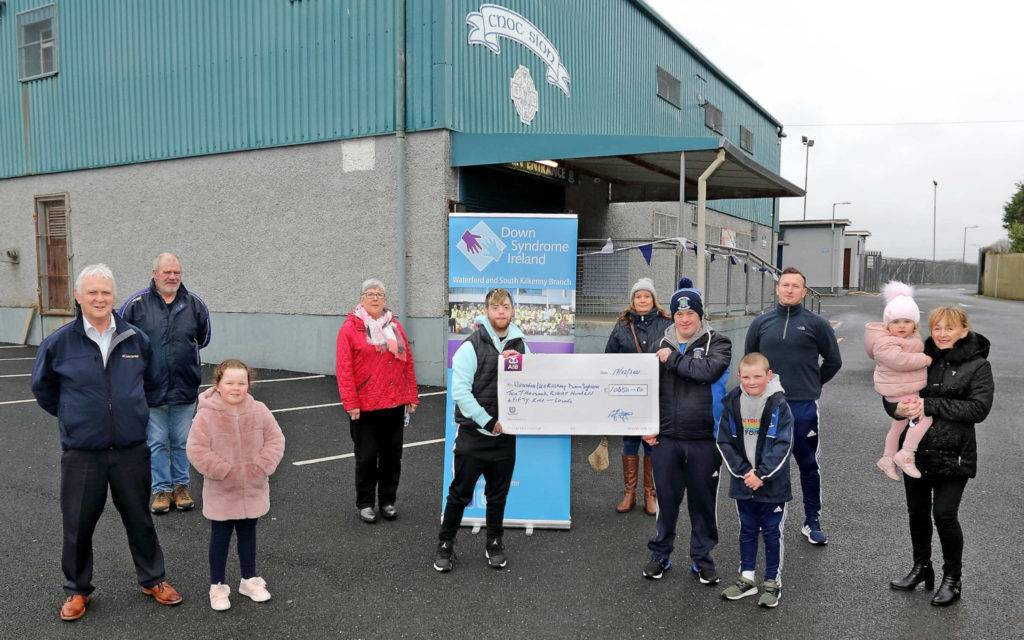 Pictured at Mount Sion GAA Centre on Wednesday where the proceeds of the sixth annual Billy Galgey Memorial Christmas Day swim held at Tramore and Kilmurrin Cove which raised a massive €10,850.80 for the Waterford and South Kilkenny Branch of Down Syndrome, was presented to John Flynn and Wayne Pepper. Also pictured were Ian, Paul and Christine Galgey, Terri Quinlan, Des and Aileen Flynn, Tommy Caulfield, Sadie Mai and Lily Bardgett. Photo: Noel Browne.

A cheque for €10,850 was presented to the Waterford and South Kilkenny Down Syndrome Ireland Branch in Waterford this week at Mount Sion GAA Club as part of the proceeds raised from the ever-popular Billy Galgey Memorial Christmas Day swim held at Tramore and Kilmurrin Cove.
The late Billy Galgey, who hailed from Stephen’s Street, was a well-known in the city and on the beach in Tramore where was a popular swimmer, and in remembering his memory, the Galgey family have raised funds for various charities since 2014.
In the past year Billy’s grandson Ian has raised over €27,000 for charity with the Shave or Dye fundraiser in memory of the late Mount Sion and Villa player Robert Bresnan for Pieta House brought in €16,510, and this latest contribution to Down Syndrome Ireland will be of major benefit.

GENEROUS DONATIONS
Speaking on the event, Ian Galgey said, “We started this off in my grandfathers’ memory back in 2014, for many years he swam all year round in Tramore and took part in the Christmas Day swim annually. To see it grow every year is something I’m very proud of and I’m sure he is smiling down.
“We are in incredibly tough times right now and to see the people of Waterford and beyond donate so generously for the great hard working lads of the Waterford & South Kilkenny Branch of Down Syndrome Ireland is very heart warming.
“I’d like to thank everyone who donated, another year down and another record broken for us. To everyone who took part on the day it wouldn’t of been possible without you. We had people take the plunge at home and from afar.
“Niall Hamerston and Liam Galgey went into the freezing cold River Kennit in England. John Galgey and Ciaran Kennedy went into the ocean in New Jersey USA and we had over 40 people who dashed into the waters in Tramore and KIlmurrin. I look forward to seeing the numbers grow again this Christmas and helping out another worthy cause.”

A GREAT SUPPORT
Speaking on behalf of the Waterford and South Kilkenny branch of Down Syndrome Ireland, Maria Rowan said, “We would like to thank the Galgey family for supporting our local Waterford & South Kilkenny Branch of Down Syndrome Ireland. Our members really enjoyed taking part on the day and are thrilled to have helped raise over €10,000 even in these difficult times.
“At the moment the branch are supporting our members by holding virtual Speech and Language sessions, virtual Lámh sign language classes and virtual dance sessions. We hope to be back to therapeutic horse-riding and virtual cookery classes very soon.
“We really look forward to getting back to our other activities when it is safe to do so – swimming, keep fit, bowling and music therapy with our youngest members to name a few. Fundraising events like this Billy Galgey Memorial Christmas Swim make the work of our branch possible and we are forever grateful.”

A REAL HELP
Paying tribute to the event, Louise and Ian Doogue said, “This year was our first ever year taking part in a Christmas Day swim and our 18 month old daughter Annabelle gave us the push to brave the cold.
Down Syndrome Waterford is new to our family and a fantastic organisation to raise money for. It was also a lovely way to spend Christmas morning together.”
Another man that took part in the event John Flynn said, “I’m a man with Down Syndrome and a member of the DS Association. I was delighted to take part in the Christmas swim to raise awareness of all the great things are happening with the association.
“This amount of money will make a huge difference to a lot of families, and I’m very proud of myself for doing the swim and I don’t shy away from any challenge. Thanks to the Galgey family for supporting Down Syndrome this year. It was great fun and tremendously supported. Here’s to the next challenge.” Well done to all concerned.