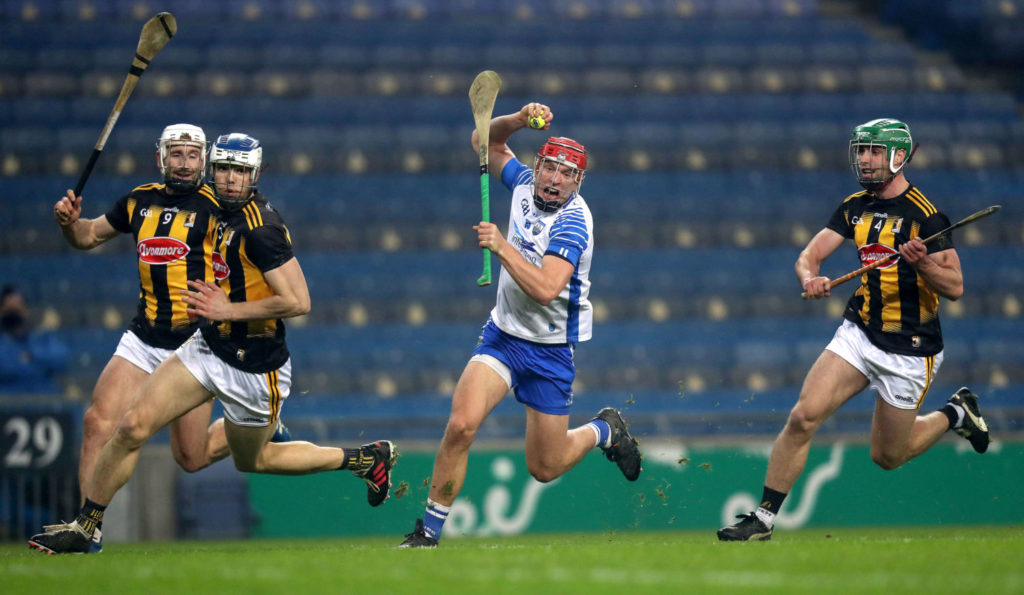 Waterford’s Jack Prendergast in full flight against Kilkenny in the 2020 All-Ireland SHC semi-final. It looks like we won’t see the GAA return until at least the first weekend in April. Photo: INPHO/Bryan Keane.

There was shock, disappointment and no little outrage on social media last week at the announcement by the GAA that they had been informed by the Government that inter-county GAA was no longer classed as ‘elite sport.’
Of course this resulted in the GAA saying that there would be no resumption of inter-county training or games until at least Easter (the first weekend of April) and people weren’t happy. I must say that it left me in very poor form that night as it seems that the light at the end of the tunnel seemed to dim.
I know it’s a small thing in the context of what people have been going through in this Pandemic but it’s not easy bringing out a sports supplement every week when there is very little live sport. It’s grand to reminisce about the ‘old days’ and pick a dozen greatest teams but the novelty wears off, for both the writers and the readers.
Therefore the return of the GAA club season last summer was a blessing. Even though it was all crammed into a few weeks and it meant that we couldn’t give every game the coverage that they would have received in previous seasons, it was still great to be reporting on live games. Then of course when that finished, without the playing of the Waterford senior football final between Rathgormack and Ballinacourty (which was a real shame), it was onto the inter-county championships and we all know what a brilliant journey that was for Waterford, even if it did eventually end in defeat. It really did shorten the winter for all of us and was a brilliant distraction.
So why has the Government seemingly now turned its back on the GAA? Was it because the scenes in places like Blackrock in Cork that caused the ending of the club scene prematurely or the likes of Cork and Down breaking the training ban?
Both probably played a part and certainly didn’t help but I’m convinced that it’s a numbers thing. The two team sports that are allowed to take place at the moment are rugby at international and provincial level and hopefully in a month’s time, the League of Ireland.
Let’s just crunch the numbers here for a second. There are four rugby provinces and one is based under the governance of the UK government but we’ll forget about that for a second. Say they have 40 odd players and 15 to 20 backroom staff. That’s no more than 60 each. Less than 250 people in all.
There are ten Premier Division League of Ireland teams and currently nine (this could become then by the start of the season) First Division teams. Say they have squads of 20 to 25 and say ten backroom staff. That’s about a maximum of 700 people. Factor in also that the rugby provinces and a high proportion of the League of Ireland clubs are professionals so they can have bubbles and all that and don’t have to go out and do day jobs, many on the frontline, like GAA players.
We’ll look now at the GAA. Most inter-county panels would be around 35-40 players with at least 15 in the backroom. That’s a minimum of 50 people per county team. There’s 32 football teams, that’s 1600 people and there’s not far off that competing in hurling too, especially if the National leagues were to be played. So that’s over 3,000 amateurs who are going out (or staying at home, like most of us) working every day, in comparison to 700 in rugby and soccer. To me this is the crux of it.
The government’s decision to ease restrictions in the run up to Christmas was a disaster and now, understandably, they are going to go the other way and be ultra cautious to ensure that we don’t go back to the numbers we saw ever day during late December and across January.
The Taoiseach seemed to give a bit of hope on Morning Ireland the other day but he also said that the daily case numbers would have to be in the low hundreds for the decision on the GAA to be revisited and there’s a fair way to go.
I’ve a feeling that the GAA are currently discussing options and I’m sure that the possibility of doing what they did last year and play the club season first and then finish the year with the inter-county championship could be an option. It worked well last year so why not?

CAMOGIE TEAM NEEDS US
Another group of elite sports people, and I don’t think anyone is debating that inter-county GAA players aren’t elite sports people, regardless of whether they get paid or not, who are awaiting news on when they will get back training or playing are the Waterford camogie squad.
Over the past decade or so the rise of Waterford camogie has been outstanding. Over recent years they have been knocked out at the quarter-final stage but to say they are knocking on the door at the highest level is an understatement.
They have also consistently figured in the All Stars in recent years and in Beth Carton they have one of the best camogie players in the land.
Unfortunately, as is the case for most women’s sports, they have to work much harder to get the type of facilities and standard entitlements that men’s teams take for granted. 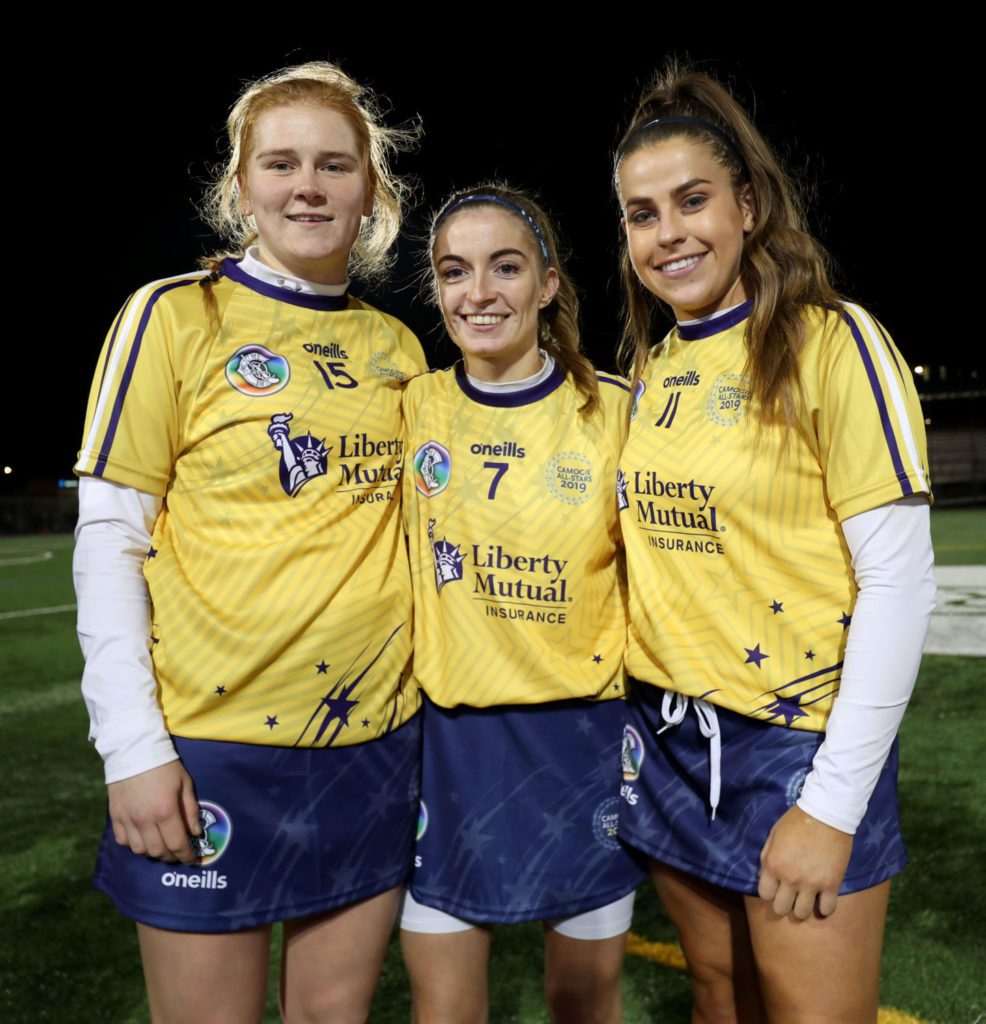 The Waterford players who were part of the winning 2019 camogie All Stars team, Beth Carton, Lorraine Bray and Niamh Rockett after the game in New York. Please support their current fundraiser if you can. Photo: INPHO/Dan Sheridan.

Therefore on February 27 they are holding a virtual run to Croke Park when the Waterford players will collectively run 240km along the Waterford Greenway. All money raised will go towards senior training costs for 2021.
Speaking to our own Tomás McCarthy in this paper last week, captain Niamh Rockett explained, “We don’t ask for anything extraordinary. Training in good facilities, getting physios at training, providing for buses, providing for gear and providing for food. If we could get food after a training session that would be brilliant. We don’t get expenses and we don’t get any mileage costs. No one is asking for that, just the standard amount of stuff is all.”
Standard stuff is right but alas the standards between men’s and women’s sport and still far from equal. The gap has closed for sure but it’s still too wide. No doubt about that.
Not surprisingly Niamh also spoke about the extra toll that such fundraising drives have on these elite players. “To be honest with you, it’s very draining mentally and physically. I’m not someone that does something half hearted. I really put everything into it and I’d do anything for the girls or the management team or the county board or anyone that’s involved in Waterford camogie. It can be very frustrating. It can take away from your own game and it can take away from your own personal life when you’re answering phone calls and begging, borrowing and stealing just for standard stuff. It really consumes your life. It’s not like you just go training from six o’clock onwards. You’re taking phone calls during the day, you’re taking phone calls during work, you’re asking sponsors and trying to come up with new, innovative ways to try and fundraise. Speaking for all the players, if we could concentrate on playing, it would be a huge weight lifted off everyone on the team.”
This team is really close to something really special but they need our help. If you can help please go to gofundme.com and search for senior training fund and the page will come up or check out Waterford Camogie on Facebook or @deisecamogie on Twitter and Instagram.

NO ORDINARY TOM
Were you like me and went through last Monday yearning for time for bed after staying up till 3.30am to see Tom Brady’s Tampa Bay Buccaneers win their second ever Super Bowl and in the process become the first ever team to win the Super Bowl in their own stadium. 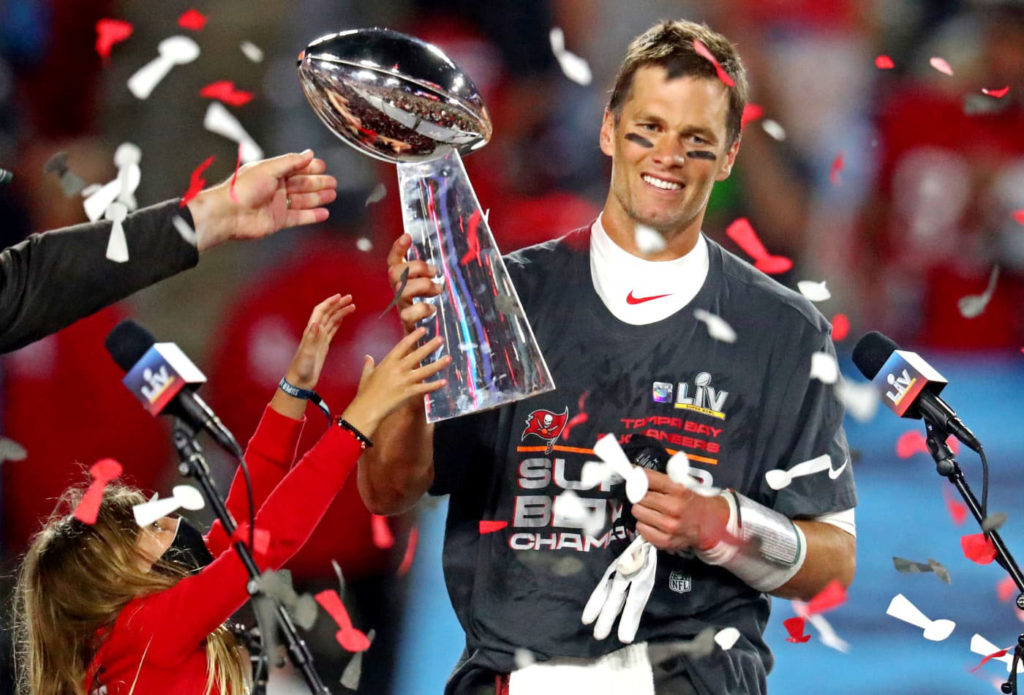 Seven time Super Bowl winner, Tom Brady.
The Bucs came into the game as underdogs against the reigning champions and favourites, the Kansas City Chiefs led by superstar quarterback, Patrick Mahomes.
Standing in his and the Chiefs way though was 43 year old Tom Brady or TB12 as he’s known, who is also widely regarded as the GOAT, i.e. the greatest NFL player of all time.
After leading the New England Patriots to six Super Bowl wins, Brady rocked up in Tampa this year and after an incredible season they won three playoff games on the road (fairly unheard of) at Washington, the New Orleans Saints and the Green Bay Packers to reach the Super Bowl at home.
In the Super Bowl they blitzed the Chiefs as their defence was incredible and Brady did what he had to two by linking up with his old Patriots mate, Gronk and another man he asked the Bucs to sign, Antonio Brown for touchdowns to seal a rather comfortable win.
This went that Brady no has more Super Bowl wins or rings as they say, than any other franchise (club), never mind players in the history of the sport and it’s all because he doesn’t eat tomatoes apparently. Definitely no ordinary Tom!

Three hurling All Stars for Waterford