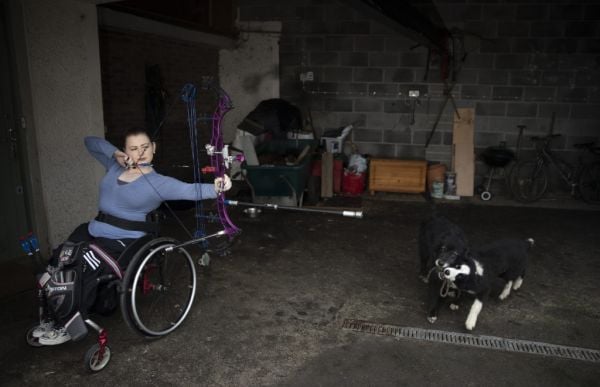 A Paralympic hopeful has spoken of her plans to compete in this year’s games in Tokyo after a year of adapting her training around coronavirus restrictions.

Kerrie Leonard, an archer from Co Meath, hopes to qualify and represent Ireland in the Tokyo Paralympics later this year.

The 30-year-old Paralympic athlete will travel to the qualifying round in the Czech Republic in July.

The Tokyo 2020 organisers said they are confident their plans for the rescheduled Games will go ahead this year.

Ms Leonard, from Culmullen, said the coronavirus restrictions brought in last year had a huge impact on her training.

“It meant that every plan that had been put in place had to be moved and change around,” she said.

“I had to make sure I was peaking at the right times and remaining as motivated as possible, even though there was a lot uncertainty when everything would return to normal.”

The athlete had to quickly tailor her training schedule and set up a target at her home.

“Over the past year I have been doing a lot more training at home where I have a target of 50 metres, which is the same distance for the Paralympics, so it’s a good way to simulate it,” she added.

“The other thing I have been doing is a lot more psychological training. Things have changed a lot in the last year, so I need the ability to have those touch points with my sports psychologist and coach in general.”

While the archer prepares to target medals at the 2021 Games in Tokyo, she has been recovering from an injury.

Ms Leonard, who is wheelchair bound, said the lockdown has been of benefit to her training.

“Funnily enough, it’s been going quite well, as well as it can be. It had a strange side effect in that it actually benefited me by being postponed, as I had an injury last year which was affecting my time that I could train,” she added.

“By getting those extra few months it meant I had as much groundwork done as any other athlete in my position.

“For any training, especially in Ireland with the weather, you have to take it when you get it.

“I am more conscious of being out in cold weather and not picking up any injuries or illnesses that would affect my ability to represent Ireland at the games.

“Of all the things that have been difficult, working from home has the most difficult thing.

“I need to carve out time for myself to train and not find reasons to work all day, every day, and that is similar for everyone.

“I miss the social aspect of the sport, you have the Irish and international circuit – so those moments of catching up with people is a lot more restricted.”

Ms Leonard said she puts a lot of effort into contacting other competitors online for some relief and distraction from work and health restrictions.

“I am very conscious other athletes may be feeling isolated and I have reached out by text to try and keep that connection alive.”