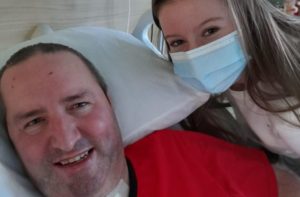 A campaign, which launched online this weekend, aims to raise enough money to bring John Upton home. The 45-year old Larchville man is the youngest of seven siblings and is father to 17-year-old Sarah.

Initial headache
Those who know John, will be aware of how sociable he is, how rarely he complains, and how great his sense of humour is. Therefore, it was with great surprise to the family when John returned home from work on December 20, 2019 complaining of a bad headache. So severe was the headache that an ambulance was called and he was brought to University Hospital Waterford. A catastrophic blow was dealt to the family when medical staff discovered the presence of a blood clot on the back of John’s brain stem.

Complications
Following a necessary transfer to Beaumont Hospital in Dublin, his condition was critical and during surgery, John haemorrhaged. Months of great uncertainty for the family followed, where the 45-year-old was moved between Intensive Care and High Dependency Units in Dublin. However, John was eventually transferred back to Waterford. Regular, his family were told that there was a strong change John would not survive, so serious was the situation. Yet, he continued to battle and he pulled through.

John is currently receiving extensive rehabilitation treatment in the National Rehabilitation Hospital in Dun Laoghaire but his time there is coming to an end. With no specialist facility close to home, the reality is that he will have no other choice but to be transferred to Clarenbridge in Galway, a facility which specialises in brain injury. 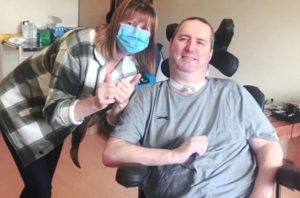 Bringing John home
The family wish for John to return home, but many things currently hinder that possibility. At present, his home will not accommodate his wheelchair. The clot on John’s brain stem has impacted a very specific part of his brain which means he is confined to a wheelchair. Further to that, he has limited mobility from the chest down and limited use of his hands. As John’s condition deteriorated, a tracheostomy was put in, which meant that eating or drinking wasn’t possible. Thankfully, intensive rehabilitation in the National Rehabilitation Hospital has made it possible for the tracheostomy to come out. Although, John had to re-learn abilities such as speech and swallowing, this means that John can come home, following more than a year of fighting for his survival.

To come home, a large project will need to be conducted on the family home, in order to cater for what John needs. The entire living space around the house will need to be reimagined, in order to give him access, mobility and a degree of independent living in his home. A significant volume of equipment needs to come home with John and adaptations need to be made to accommodate these.

On the GoFundMe page, where a target goal of €150,000 has been set, a statement read “Myself and Sarah love John dearly and miss him so much, as does his brothers and sisters. Spending over a year apart from John has been the most difficult journey we have ever experienced. John most certainly deserves to be home. Coming home has been a huge motivating factor is his recovery and having the right environment, care support, love of his family and company of his friends will again improve his wellbeing and further recovery.”