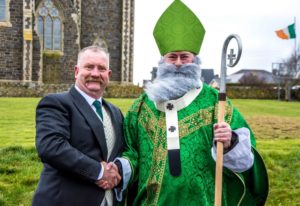 EACH year, Tramore receives €5,000 for their St. Patrick’s Day parade from Waterford City & County Council. Given the absence of any parade this year, the organising committee have decided to use the money to light up the town, in a similar vein to the lights display planned in the city.

Tramore is hoping to reap some of the promised benefits of Waterford’s “2021 Festival Greening” in conjunction with Fáilte Ireland, for which Waterford Council received €25,000.

By joining in on the “greening up” of the area, Johnny O’Grady, chairperson of Tramore St. Patrick’s Day parade, said they hope to “draw tourists towards the area and show people there is light at the end of the tunnel.”

The possibility of a lights display or a festival was already being explored for Tramore for later in the year, but given the uncertainty around public events, the decision was made to light Tramore up for 10 days for St. Patrick’s Day.

“We usually have a collection outside the church in the run up to St. Patrick’s Day, and we have a collection outside the supermarket once a year along with the €5,000 that we are given from Waterford Council. This money keeps us going in terms of the cost of a parade and the festivities. We were going to keep the €5,000 and put it towards something later in the year but we felt that Tramore needed something now to lift the spirits so we are using the funding for this,” said Johnny.

Iconic areas in Tramore will be lit up, including the Railway Station, the Railway bridge, the Grand Hotel and the Metalman.They will be lit up for 10 days, with all lights and works being supplied and undertaken by fellow Tramore man John Grubb from EveryEvent.

The lights supplied have been quoted at €5,300 and Johnny O’Grady hopes the gesture will “be a light of hope to the people of Tramore in uncertain times.”

“We are Irish,” continued Johnny, “and it is St. Patrick’s Day. 10 days felt in my heart like a message of hope. Beyond March 17th, we will endure and we will keep going. To see areas lit up in green will be like a beacon of hope, particularly if you happen to see it unexpectedly. It all comes back to Covid really, there are no guarantees of anything and with last year’s parade cancelled, we needed to do something this year to create positivity.”

“This spectacular illumination will light up some of Tramore’s most iconic buildings and will form a cornerstone of Fáilte Ireland’s objectives for the day, “ said Cllr. Quinlan. “The Tramore team must be congratulated in delivering this for a full 10 days to the local community and for a fraction of the cost of what it had been first estimated.” 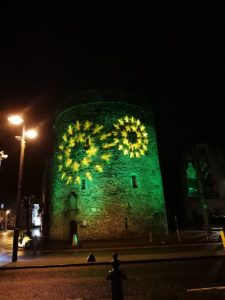 EveryEvent will light up Tramore, in a similar way to Waterford, pictured