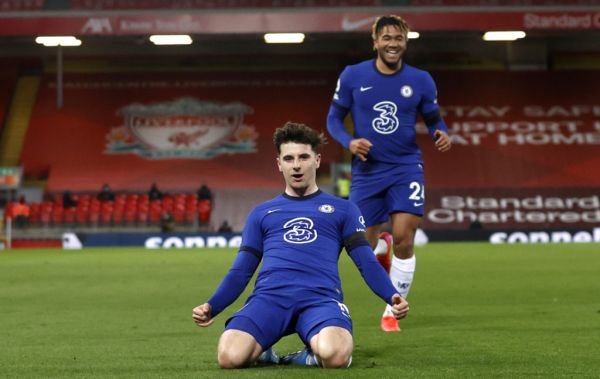 It shows how far the defending champions have fallen that this was billed as a battle for a Champions League place but in reality there was only one side in the hunt and all it took was Mason Mount’s 42nd-minute goal to lift them back into the reckoning.

Chelsea’s last win at Anfield in 2014 effectively did for the title hopes of Brendan Rodgers’ side. This one was a blow to Liverpool’s chances of a top-four finish.

Jurgen Klopp’s side, now four points adrift of that with Everton and West Ham ahead of them, have now gone more than 10 hours without a goal at Anfield, a testament to the old adage of ‘if you don’t shoot, you don’t score’.

The hosts failed to register a shot on target until the 85th minute and Georginio Wijnaldum’s weak header was never going to test Edouard Mendy.

They have taken one point from the last 21 on offer at home since Christmas and scored just two goals, one of which was a penalty.

None of their established front three of Mohamed Salah, Sadio Mane or Roberto Firmino managed the feat but the sight of Salah, the Premier League’s leading scorer, being substituted just past the hour looked baffling.

The Egypt international thought so as he sat shaking his head having been replaced by Alex Oxlade-Chamberlain.

Chelsea, by contrast, looked full of threat with Timo Werner – a player Liverpool were interested in but decided they could not afford last summer – a constant problem for the hosts.

Despite one goal in his previous 17 Premier League outings he caused problems with his movement, drifting out to the left, then popping in the middle to give Fabinho a real headache on his return to the side.

The Brazil midfielder, replacing Nat Phillips after he became the latest centre-back to pick up an injury, was partnering Ozan Kabak in Liverpool’s 15th different central defensive starting partnership in 27 league matches.

Faced with a statistic like that is is perhaps understandable why there was a lack of cohesion at the back and Werner should really have profited.

He fired one early shot over and then failed to lift his effort over Alisson Becker, back in goal after the death of his father in Brazil last week.

Even when the Chelsea forward did beat Alisson, who had another rush of blood in charging out to meet Werner only for the ball to be tipped over his wild swing of the leg allowing the Germany international to slot home, VAR ruled the attacker’s arm had been offside 20 yards earlier in the build-up.

Liverpool’s one chance fell to Sadio Mane but Salah’s first-time ball over the top got caught under his feet and missed his shot with only Mendy to beat.

Chelsea were still controlling the game and caught their opponents on the counter-attack when N’Golo Kante quickly swung a loose ball out to the left wing from where Mount cut inside to beat Alisson having been given far too much time to pick his spot.

All five of Mount’s league goals have come away from home.

Tuchel spent the first five minutes of the second half screaming at his players to press harder and play higher up the pitch but Liverpool’s players were equally vocal when Firmino’s cross hit the raised arm of Kante from close range but there was to be no penalty award.

Klopp’s attempt to change the direction of travel saw him send on Diogo Jota for his first appearance in three months and Oxlade-Chamberlain.

Jota’s first touch was a half-chance from a deep cross but he was, understandably, not sharp enough to take it.

Werner, meanwhile, was doing everything but score as Alisson’s leg saved another shot as he bore down on goal.

Chelsea’s organisation, drilled into them by Thomas Tuchel in the short time he has been at the club, served them well as Liverpool ran down blind alleys, aimed hopeful crosses into the box but generally ran out of ideas.