DARREN SKELTON: Reflecting on a year with covid 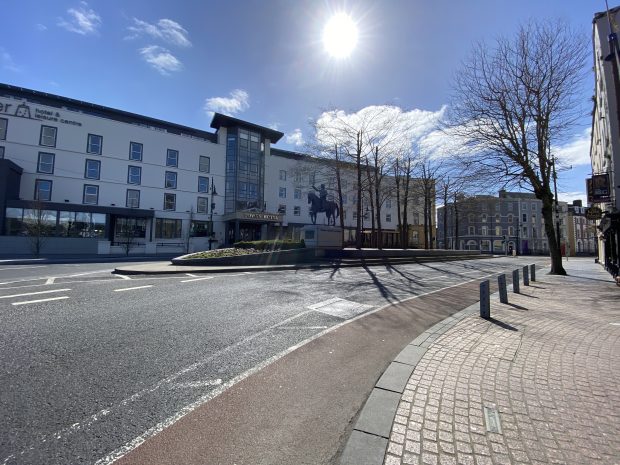 THIS time last year, I packed a few bits from my desk and came home, genuinely not knowing when I’d return. There was something exciting about it – almost exhilarating – like when you were sent home from school as a child because of a snowstorm. Everyone was talking about it. We literally were all in this together. I remember going down to Aldi and wondering why people were suddenly so afraid of running out of toilet paper. People were also filling their trolleys with packets of rice and tinned goods as if the apocalypse was on the horizon and people were getting ready to retreat into their bunkers. The only word I have for it, is surreal. None of us had ever experienced anything like it before and we genuinely didn’t know what was going to happen next.

I did what a lot of other people started to do, mainly eating and drinking a lot more. I started going for daily 6k walks around the city centre, watching in genuine amazement at how deserted the streets were. People were frightened, mainly because they didn’t know what was going to happen next but also because they were reading stories about the army being drafted and how the hospital was going to need more storage space for all the dead bodies that were going to start piling up. After all, we’d been watching images on Italian television of bodies lined up on the streets. The thoughts of this unthinkable reality coming to Ireland kept us, for the most part, locked up in our homes.

We may never truly know the extent of the pain and anguish that the Covid-19 lockdown has had on people. Firstly, there are the people who got the virus. Some were fine, others had to fight for their lives in hospital. Some of those people told me that, months on, they’re still not the same and struggle to walk up a flight of stairs without losing their breaths. Then there’s the people who died. Some were elderly, but that didn’t make their deaths any less tragic. Just because you’re in your 70s or 80s, doesn’t mean that you have any less right to a full life. The woman next door to me is 90 and she’s out in her garden doing the weeds every other day. Anybody who suggested reopening the economy because these elderly people were already marked for death, absolutely enraged me. And, of course, it wasn’t only elderly people who died. Children, teenagers and otherwise healthy adults also lost their lives to Covid and, heartbreakingly, were unable to have the funeral that they deserved.

This has really affected me I have to say. My dad was buried just a fortnight or so before the restrictions came in. If we had to choose 15 or 25 people to attend that funeral, it would have broken our hearts. I have so much sympathy for those people who lost loved ones during the lockdown. They were robbed of the most fundamental part of the grieving process. And this is where I come to the point of this column – we may never fully know the extent of how this lockdown has affected people. Domestic violence has increased to frightening levels. Yes, there may be some male victims of this but, overwhelmingly, the amount of women that have been forced to share a lockdown with toxic, violent men is frightening to imagine. And of course, the children too. It breaks my heart when I think of what people are going through behind closed doors, but of course I’ve spoken about that many times on this column before.

There are also people with addiction issues who have dug themselves deeper into mental, physical and financial holes as a result of being locked down. One person spoke to me last week about how they have lost so much money to gambling that they had to turn to loan sharks to get out of one hole and into another, much bigger one. So many other people have fallen off drink and drugs wagons because the usual supports that were available to them either ended completely or went online, which as we’ve learned in the last year, is fine for a novelty but nowhere close to the real human contact.

It’s been a tough year for everyone. Small business owners, musicians, landlords, people with special needs and their families, those who have to juggle work and childminding, frontline workers, people who are unable to see family members and those who have to deal with painful situations behind closed doors. And what’s worse is that we still don’t know when we’ll get out the other side.

Do me a favour, sit down with your phone later on and text as many people as possible to ask them if they’re okay and if there’s anything you can do for them. You never know – that one text could be the outreach that someone is waiting for.