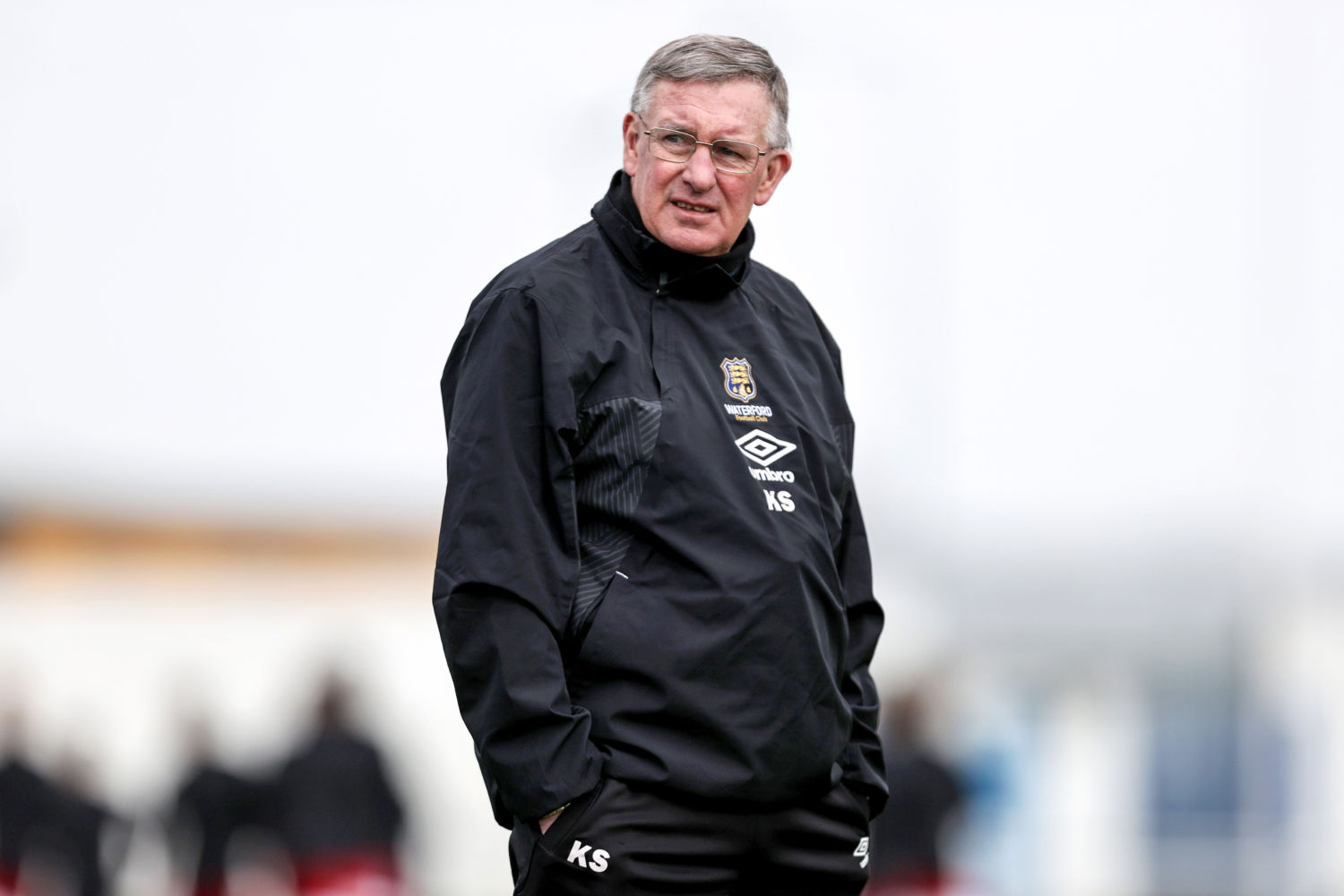 Blues boss Kevin Sheedy explained how himself and Mike Newell came together as a football partnership. ‘We played together with Everton and we became good friends after a period of time. We worked together at Hartlepool and more recently in Saudi Arabia. We have the same philosophy on how the game should be played. The facilities here in Waterford are top class and that is important to attract good players to the club. The RSC and WIT training grounds and facilities are excellent. We want the players to come into training every day with a smile on their face and give 100% commitment. We are working hard to bring the right type of players in who will be successful at Waterford.”

‘CALL CAME OUT OF THE BLUE’
So how did their appointment at the RSC come about? 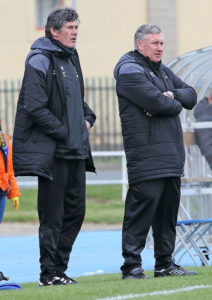 ‘The call from Lee Power came out of the blue but it was a welcome one and we are really looking forward to the challenge ahead of us. When myself and Mike (Newell) (pictured right) received the call we agreed it was a no brainer. We looked at the history of the club and jumped at the chance to manage a club of such pedigree in Ireland. The two weeks of lockdown with Mike was a challenge in itself but we survived and we were thrilled to get onto the training field to work with the players.
“Outside of football I also have a love of horse racing and many a time I have backed winners and losers at the Waterford & Tramore Racecourse over the years and I can’t wait to visit the course when the lockdown is over. I recently invested in a horse of my own and it would be brilliant if to see him run at Tramore one day.”

A BOY IN GREEN

Kevin Sheedy is an Irish international legend having played 46 games for the Republic of Ireland and he recalled his memories of playing with the Boys in Green. 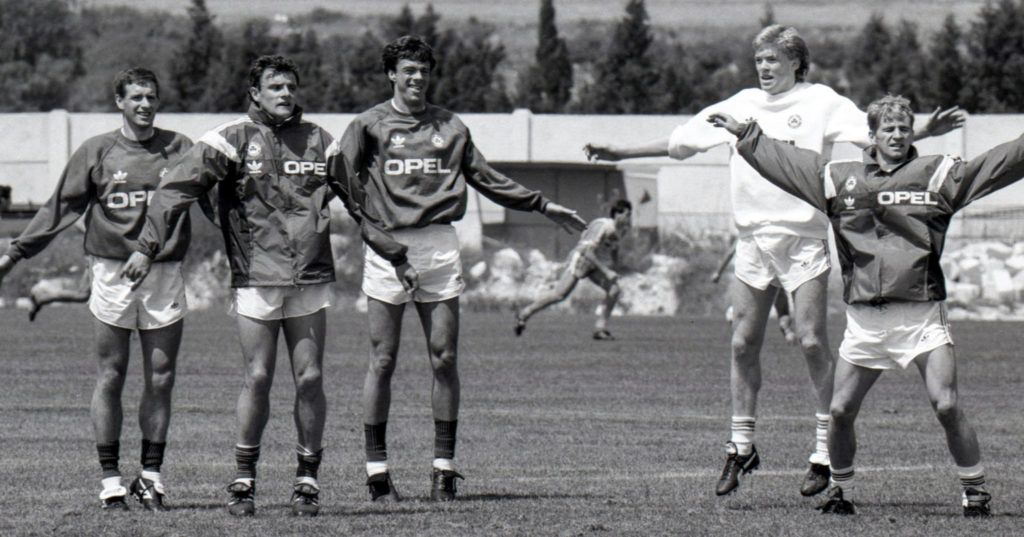 Kevin Sheedy, Kevin Moran, Dave O’Leary, Steve Staunton and Chris Morris in training with the Republic of Ireland at their Pre World Cup camp in Malta in 1990.

“I was born in Wales but my family came from Ennis in Co. Clare. Jack Charlton was a fantastic manager and I owe him so much. Playing in Euro ‘88 was great and I played in all of those games. Then of course we qualified for Italia ’90 and I was thrilled to score Ireland’s first ever goal in the World Cup finals. The fact the goal was against England made it even more special. Then there was the penalty shoot-out against Romania when I scored the first penalty. We had some wonderful times and I will always be grateful to Jack Charlton for giving me the opportunity to play with Ireland. I was extremely sad to hear of his passing last year.
Kevin is also an Everton great after helping them to league titles and European success in the 1980s. “Howard Kendall at Everton was top class manager, brilliant at getting players to play for him, he was well organised and playing and training for him was a sheer joy. I hope to bring some of these qualities that both Jack and Howard possessed to Waterford FC.”

‘DEDICATION AND DESIRE’
Mike Newell explains. “Nobody can wave a magic wand and everything depends on the players you have available at any given time. One of the definitions of to manage is to get by and sometimes that is what you have to do. Hopefully the lads will understand what we’re demanding of them and they should because it’s not complicated. That said, I personally will never ask a player to do something he can’t do and I know that Kevin feels the same way. If we see that they are capable however we will nag and nag and demand it of them time and again. That is our job. Talent is fine but talent alone is not enough. To succeed as a player you need dedication and desire. We have a belief on how football should be played but getting that over may not happen overnight so we will need some time and I am sure the fans will give us that time, but we are also aware that we will be judged on results like everyone else.” 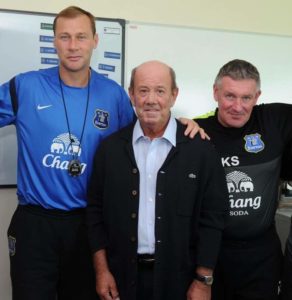 Kevin Sheedy spoke about the managers he has learned his trade from. “Howard Kendall (pictured with Kevin and Duncan Ferguson at Everton a few years back) was brilliant and he gave me the confidence to express myself on the field of play at Everton. John Sillett gave me my league debut with Hereford United when I was just 16 years old and I will always remember him for that. John’s view was “if you are good enough you are old enough” and I also am a firm believer in that fact. Jack Charlton as I have already spoken about and then there was Kevin Keegan when I played with Newcastle United. I picked up a great deal from all of these wonderful managers and will apply all that experience I gained to help Waterford FC this season and build a club that will compete with the best in the future.”

Kevin is also an advocate for the Beating Bowel Cancer, a charity very close to his heart. “I underwent surgery for bowel cancer, my mum died from it and my dad also. Therefore I am now an ambassador for ‘The Beating Bowel Cancer’ campaign. Thankfully I was diagnosed early and was able to beat it. I was reluctant to get involved at first because I’m not an outgoing person but I’m glad I did. We went on to help many people and continue to do so.”