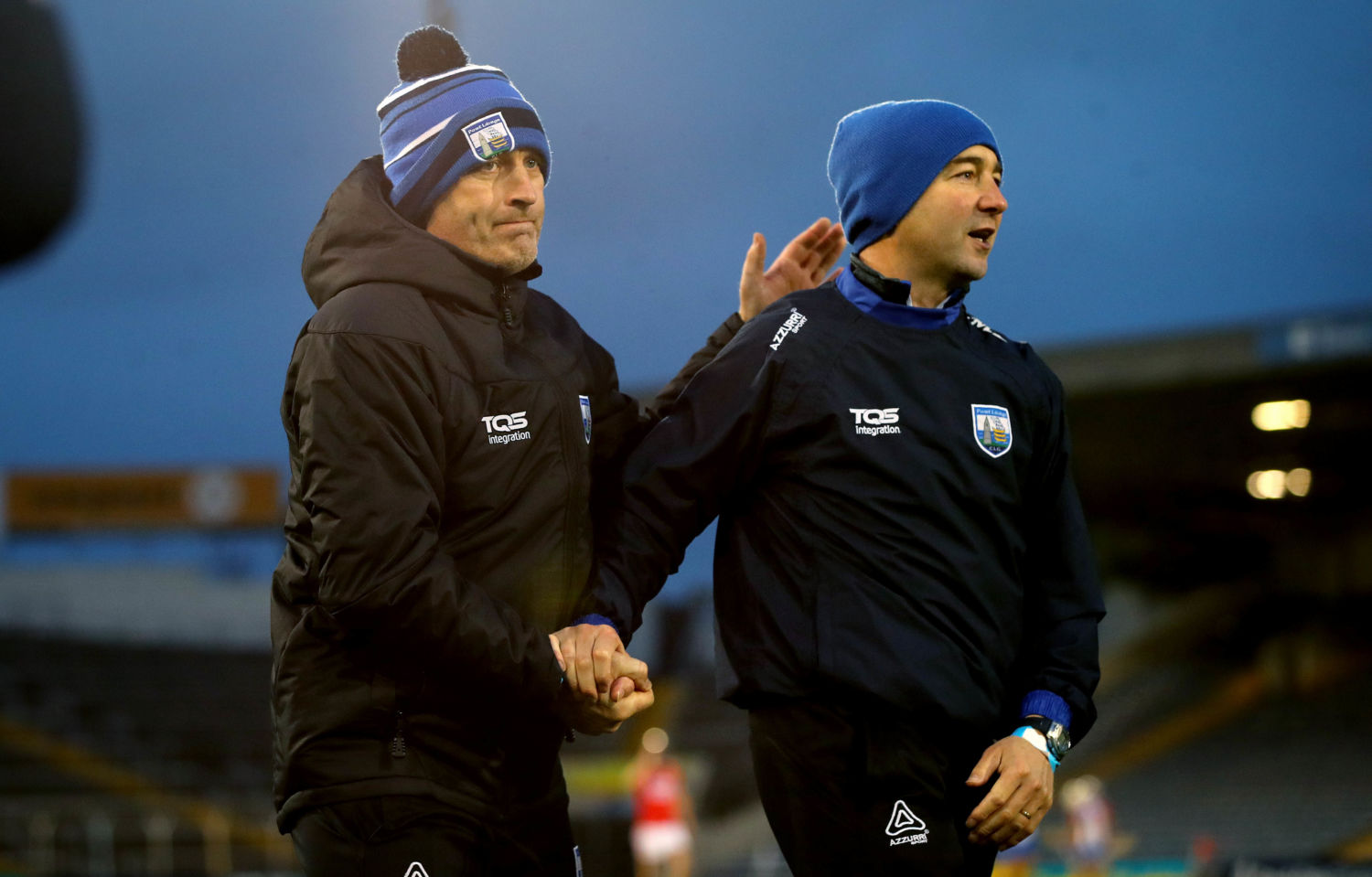 Waterford hurling coach Mikey Bevans was reluctant to make the switch from player to trainer when he retired from the club game in Tipperary. During a fascinating webinar this week ‘Planning for the Club Season’, hosted by Déise Óg Waterford, the Toomevara man revealed how he caught the coaching bug.

‘I WAS BUZZING AFTER IT’

“I finished playing with Toomevara in 2010 and I had no real intention of getting into coaching. That’s the honest truth. I was captain of the senior team on three occasions and that forced me to come out of my shell and got me thinking more of what a team is about. As regards coaching, I had no real inkling that I was going to get into it. Two years later, a senior club in Tipperary, not far from where I’m living, Upperchurch Drombane asked me to get involved as a coach and straight away I said no. My first instinct was to say no. I was reluctant to get involved to be quite honest. I just didn’t feel that I was cut out for it. Then the following year, they came back again and something clicked. Whatever happened in the twelve months, I just said ‘look, I’ll give it a go’. My instinct just changed. So, that was it. I never really took a session before that. I had done very small bits of coaching with juveniles in the club if I was ever asked to help out. That was pretty much it. 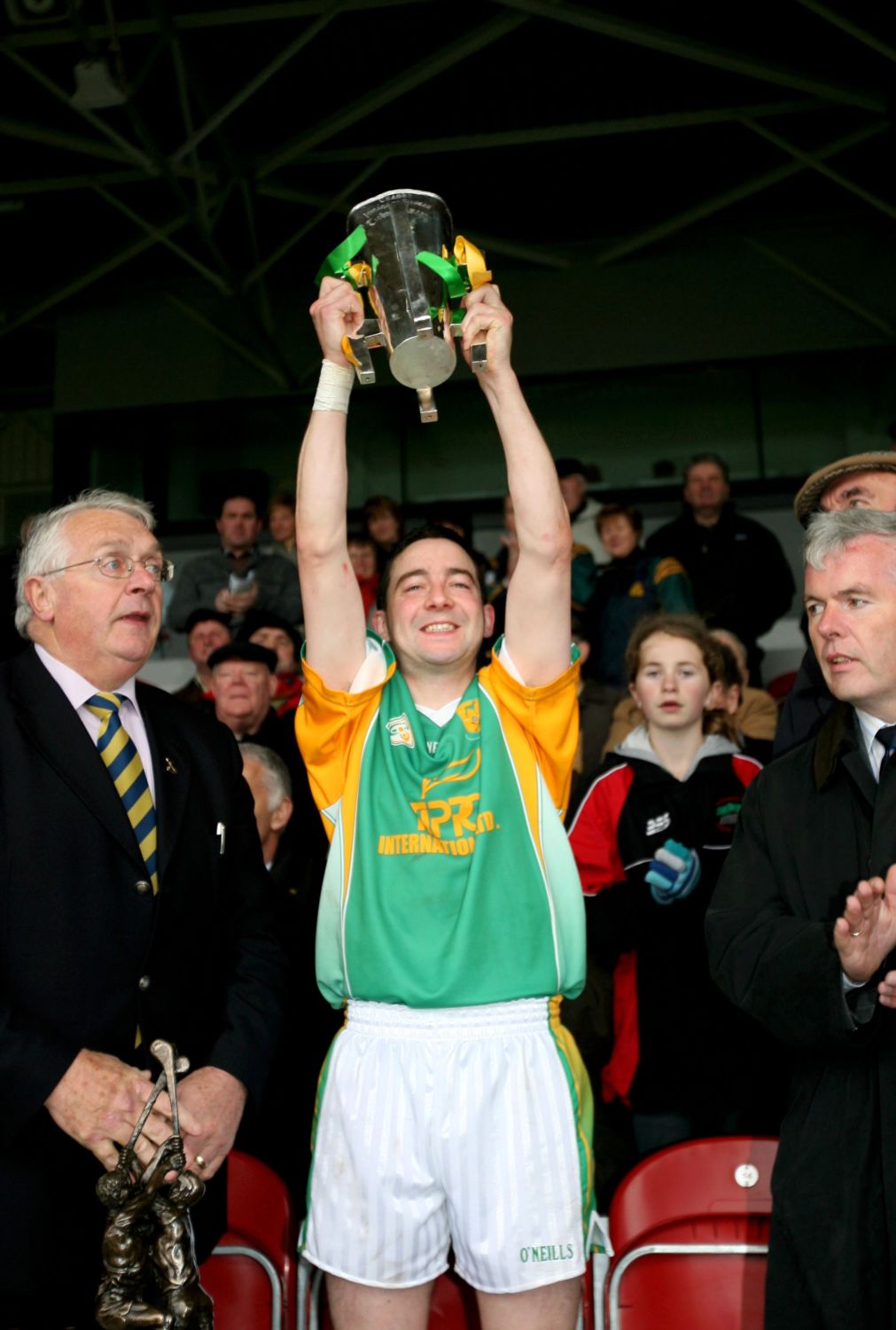 Mikey lifting the Tipperary SHC Cup after their final in in 2008.

“When I got involved, it was a little bit loose what they asked me to do. I was the coach, I was the S&C person, I was the manager, logistics, stats, everything! I had four selectors but they let me take centre stage. The more I got into it, the more I enjoyed it and the more I loved it. I remember the first session; I was buzzing after it. As a player, I enjoyed training and I enjoyed training hard. I knew what a good session was when I was playing and what it felt like. That was the way I approached my first experience in coaching. I wanted to bring an energy and a buzz to it.”

He spent 2013 and 2014 on the Premier club scene. Then, the call came from Liam Cahill to link up with the Tipperary minors.

“Myself and Liam struck up a good friendship and a good partnership. Very lucky really to be involved. A set of circumstances have led me to where I am now. That’s the background. I always said that success for me was I wanted players to learn, I wanted to give good feedback, I wanted to have good training sessions, good enjoyment factor in it and just giving it everything and be the best we can be as a coach and a group of players. That was what was in my head when I started and that’s what’s in my head now today.”

Bevans has been Cahill’s right-hand man with the Tipp minors, under 20s, under 21s and now the Waterford seniors. During the 2020 championship, he was an energetic presence in the warm-up, on the line and during the water breaks. The team responded.

‘IDENTITY OF THE GROUP’

When he starts working with a group of players, he looks for qualities that he can work with for the rest of the season. “The character, the personality, the identity of the group is the starting point. That’s the most important thing that you can clarify good and early. What are we going to be about? This is the way we play the game. It becomes a set of standards; it becomes a creed. It has to be something that becomes recognisable and it’s defined. It’s something that has to develop over time. You have to tease it out with the players and recognise it. I always talk about the personality of players. You can tell a lot about a player and his personality from the way he plays, the way he trains, the way he carries himself. That’s all very important to me. I want to see something in the players, I want to see something in the team, I want them to stand for something. That’s the starting point for me.” 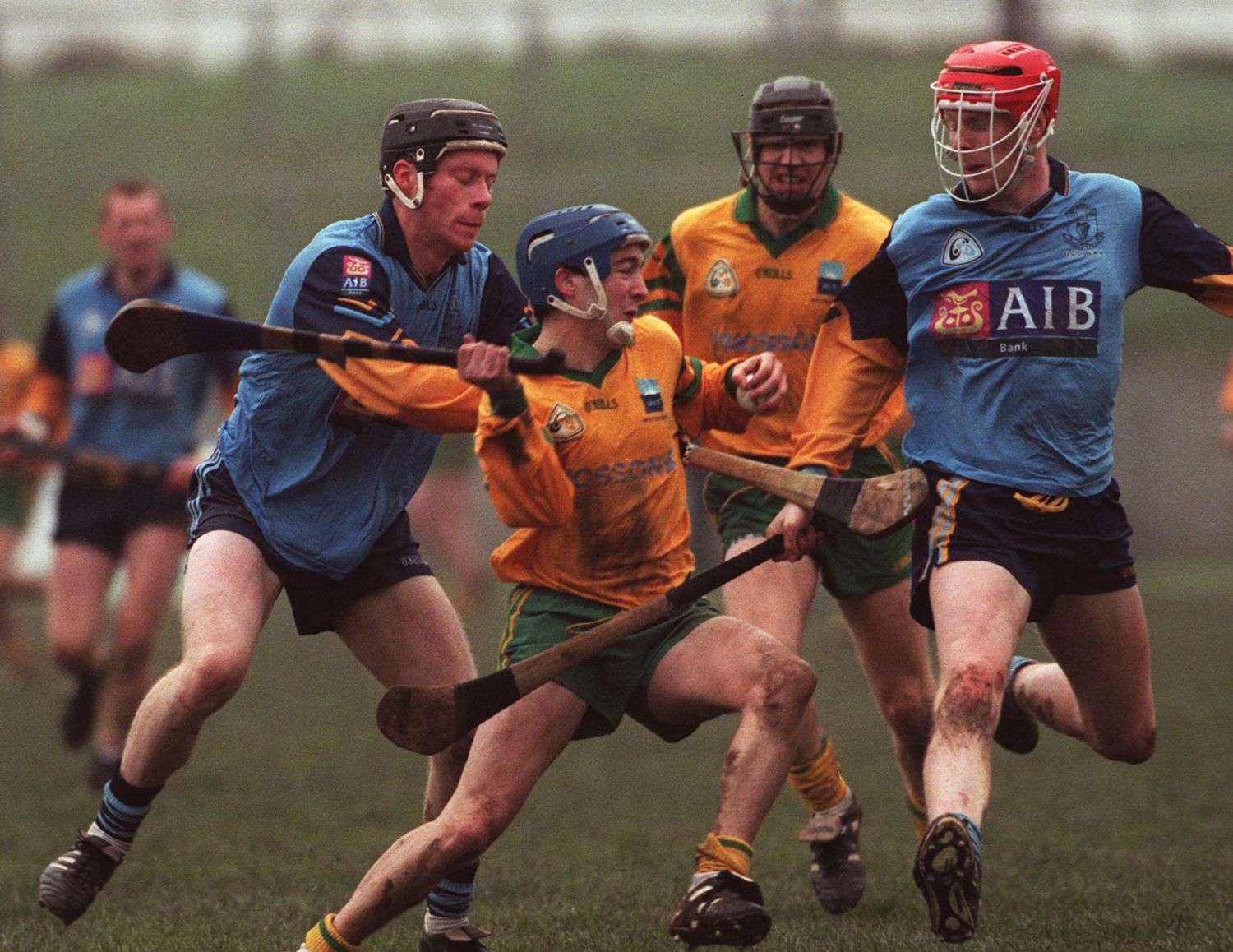 Mikey in action for WIT against UCD in the 2000 Fitzgibbon Cup Final.

Planning plays a big part in how he operates. He maps out every session a couple of days beforehand and sends it out to each member of the management team so everyone is on the same page. “I’ll write it out on a Wednesday and come Friday, I’ll have so many notes and scribbles all around it. By the time that training sessions comes, I can’t wait to get into my car because I can see the whole thing unfolding in my head. That’s the way I have to do it, I can’t do it any other way.”

Planning and purpose are the key words in his coaching manual. Matchday is in the back of his mind when he hits the training field. “My training all the time is linked to how we will play the game. It’s always linked to what’s going to happen on a championship day. This is how we’re going to go about things, these are our standards, these are our habits, these are engrained in our beliefs, these are our set of principles. This is the way we always train and then we transfer that onto the pitch. It’s not a case that you just turn up on championship day and your training really had no relevance. It has to be relevant all the time. I generally keep the warm-up the same every game we play. I’d like to think that if someone watched my warm-up, they’d have an idea of what way these guys are going to play and what they’re going to be about. That’s the way I want it. Everything has to be relevant and everything has to have a purpose.”

The nine-time county medallist with Toome prefers to use small-sided games during his sessions. “There’s way more purpose in them. Most of my sessions would be done around small-sided games. Little examples of what’s going to happen. 30 second bouts of three against three, seven against seven, different rules, different conditions built in. Still practicing the individual skill or the basic skill within a game. Just to make it relevant. If I want to practice a shooting drill, it’s more realistic if they put the ball over the bar while they get held up and have to drive their feet through a tackle. That’s more relevant to what’s going to happen than just getting a ball and hitting it over the bar. What’s in my head all the time is purpose. To have every session planned, write it out, think about it and think about the purpose I want to get from it.

“Whether that’s a quick, snappy session that’s 45 minutes and it’s all go, a hundred miles an hour or whether that’s loads of small-sided games with loads of communication and a bit of chaos. If somebody was looking at it, they’d think ‘there’s no well drilled player here it’s just mad, intense and chaotic’. That can happen in games as well so maybe that’s what I’m going after. Maybe I’m going after high intensity mixed with composure or I’m going after good decision making. That’s the way I approach things. Purpose, purpose, purpose. What are we doing? Why are we doing it?” 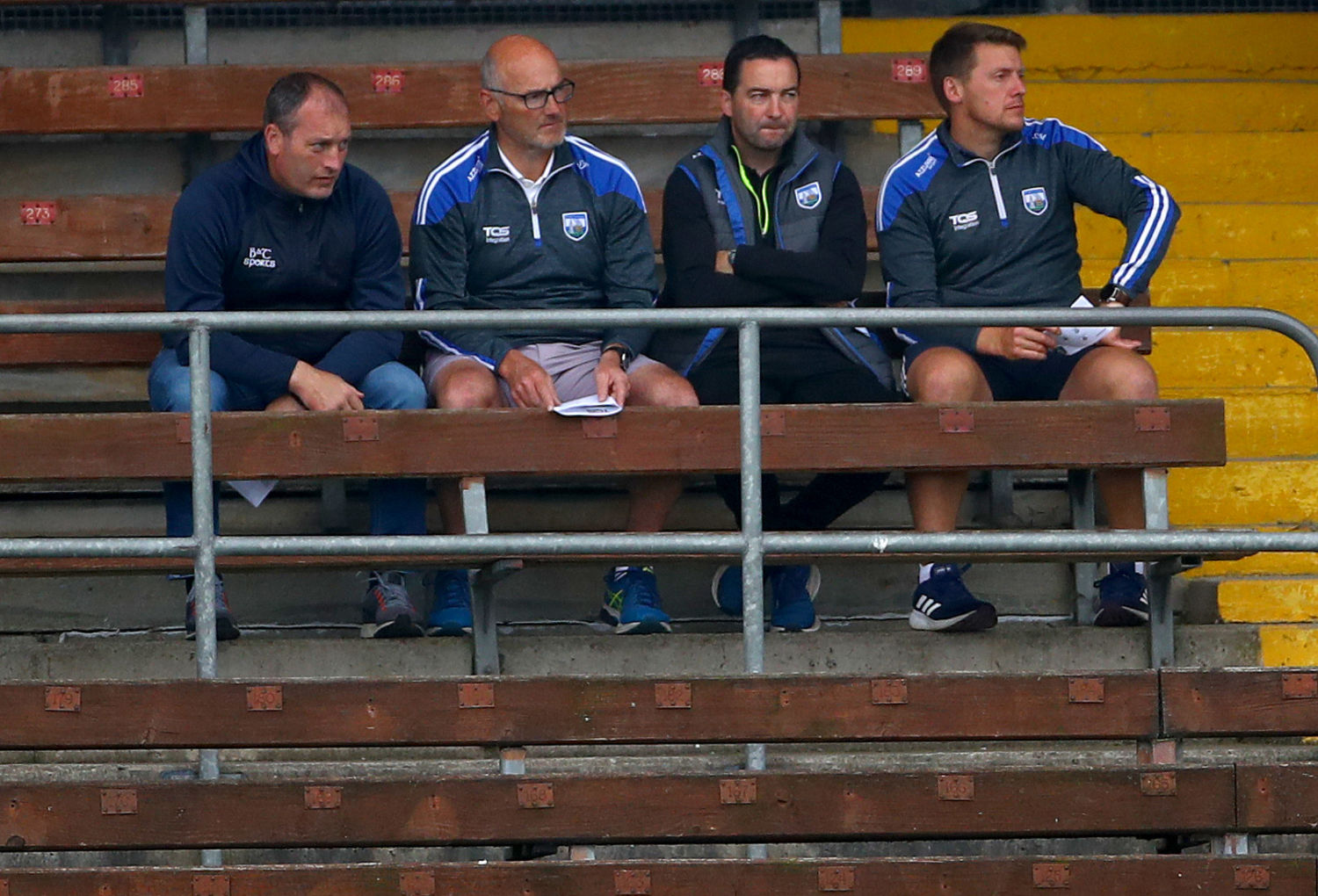 ‘BE YOURSELF, BE HONEST’

He treats all players equally in training. “I don’t care if someone is starring on the team one week and there’s another guy that hasn’t got a game in two years, I will treat them all the same. If there’s a guy that’s after being man of the match and he does something in training that I think is dishonest and not good for the team, I’ll tell him. It goes back to being consistent.”

To finish off his presentation, Bevans offered this advice to the hundred attendees on the call. “Speak the truth, be yourself, be honest, have your own set of principles and lay them out on the table good and early. Talk about your own beliefs, your own principles all the time, don’t waiver from them. Be consistent. That’s what players like: consistency. Creating an identity is the most important thing for me. If anybody is watching this club play, it doesn’t matter if it’s a training session, a challenge match, first championship match, county final, people in the stand can say ‘that team are hard working’ ‘that team never go back from anything’ ‘in that team there’s no excuses, they never lie down’ ‘that team have unbelievable team work and support each other’. You stand for something.”

Accidental coach or not, Mikey has made his mark with Waterford.