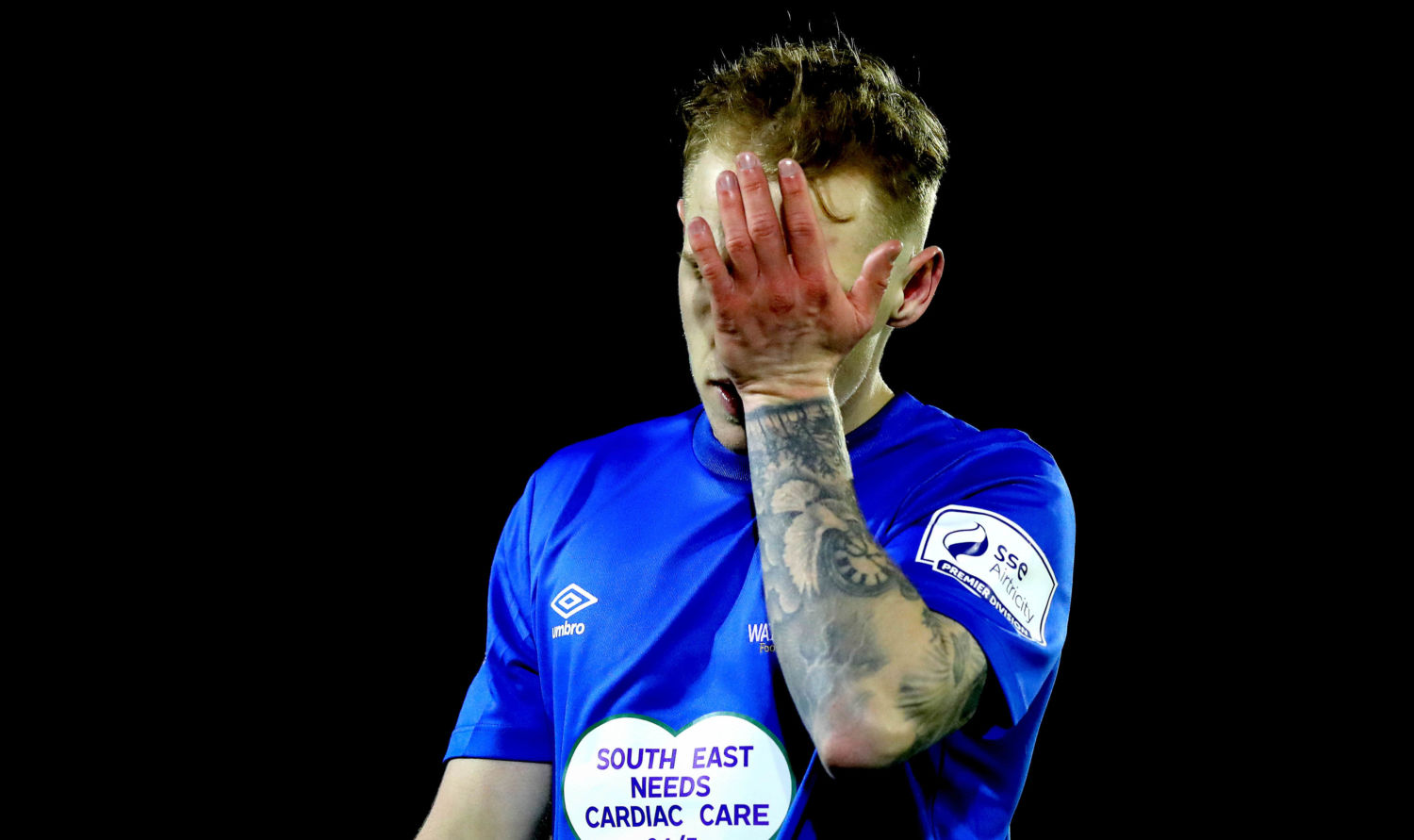 A brilliant strike from Sligo Rovers winger Jordan Gibson inflicted a second defeat in the SSE Airtricity Premier Division on a battling Waterford FC in their game played in front of the RTE cameras at the RSC this evening.
After making three changes to the side that lost to Drogheda United, Sheedy’s men certainly put their opponents to the pin of their collar with Cian Kavanagh’s early header putting his side in the driving seat, and had the same player converted from close-range, it could have been a different result.
Johnny Kenny forced Brian Murphy into the first save of the game on four minutes when he took a pass from Jordan Gibson, but his low effort was kept out at the near post before Adam O’Reilly had a shot blocked out for a corner kick sixty seconds later.

BLUES IN FRONT
The Blues took the lead from the resulting corner-kick on six minutes when James Mascoll sent in a right-wing ball that picked out the unmarked striker Cian Kavanagh, and he powered a header past Ed McGinley from six yards.
Sligo were denied the equalising goal by the left-hand upright on ten minutes when skipper Greg Bolger floated a cross into the danger area that found Kenny, but his header came back off the woodwork with Murphy beaten.
Waterford should have doubled their advantage on 18 minutes only to be denied by a brilliant double save from McGinty. Shane Griffin cracked in a shot from the edge of the area that was kept out by a strong hand from the keeper with Kavanagh failing to convert the loose rebound from close-range.
After having a strong penalty appeal turned down when Figueira went to ground under a challenge from Cameron Evans, the visitors restored parity on 35 minutes when Jordan Gibson skipped past Mascoll with ease before crossing into the area when Romeo Parkes volleyed an unstoppable shot past Murphy from 12 yards.
It was Murphy that denied Sligo the lead three minutes later when a long pass from Garry Buckley into the clear, but with only the netminder to beat, his shot was well kept out at the expense of a corner- kick that was easily cleared. 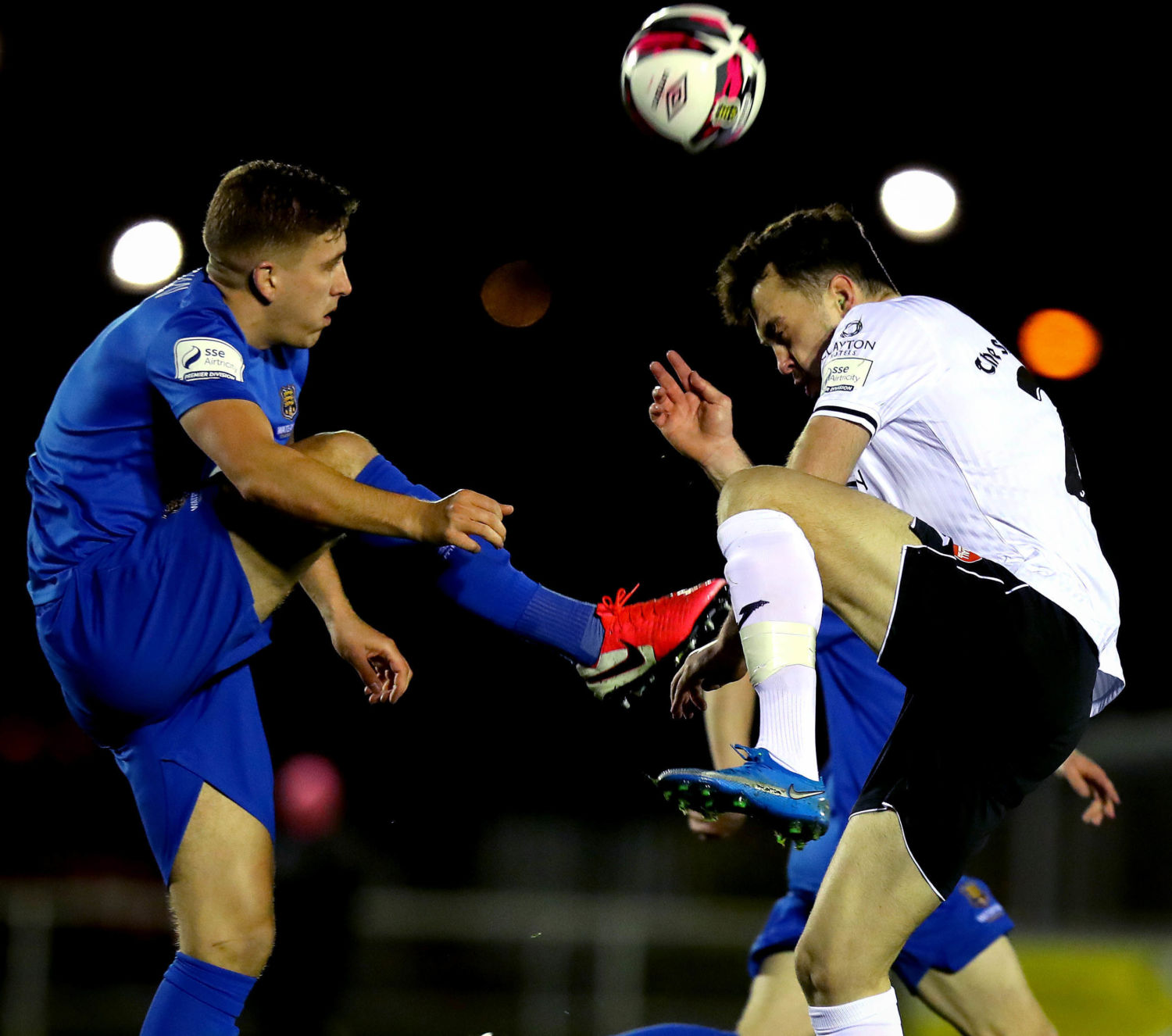 Waterford’s Oscar Brennan and John Mahon of Sligo in action at the RSC tonight.

GIBSON STUNNER
While there was an air of disappointment about the first goal that the Blues conceded, you could only applaud the one that gave Sligo the lead on 53 minutes when Jordan Gibson brought the ball onto his unfavoured left-foot on the right-side of the area before arrowing a stunner that beat Murphy with the aid of the far post.
The goalscorers combined for another Sligo chance on 69 minutes when Romeo Parkes slipped the ball out to the right channel for Gibson, who saw his first time right-footed shot from just inside the area go narrowly wide of the far post.
A magnificent block from Garry Buckley denied the home side the equalising goal on 74 minutes when James Waite sent in a cross from the left that was spilled by Ed McGinty into the path of Cian Kavanagh, but the defender throw his body on the line to deny the centre forward.
Daryl Murphy had a header well held by McGinty shortly afterwards as Kevin Sheedy’s men tried to get something out of the game, but they couldn’t muster up that clinical chance in the final ten minutes as Sligo saw out the game to pick up their first win of the season.
The Blues are now two defeats from two games and head to Derry next weekend.