The Henry and Rachael show was just brilliant for racing 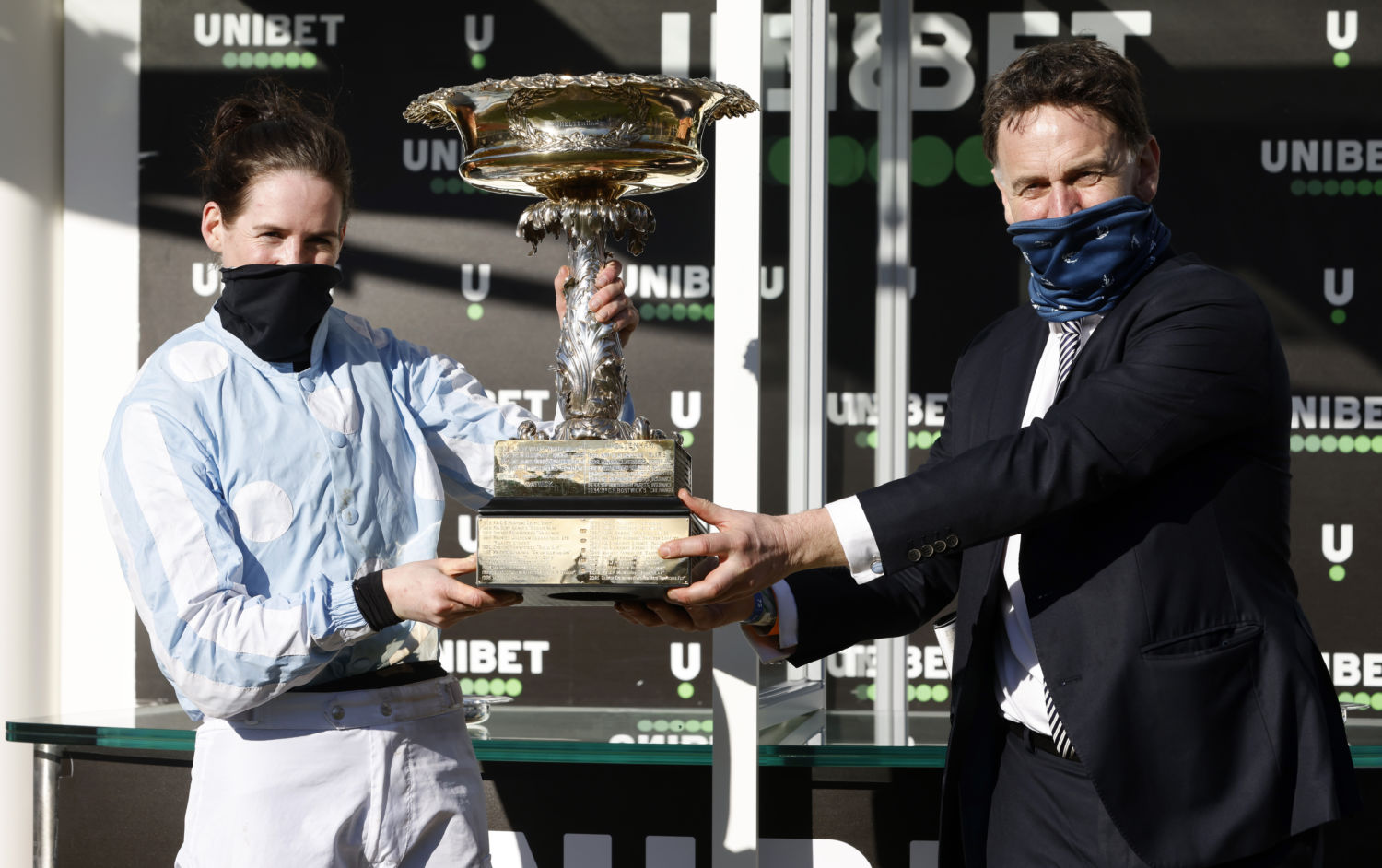 Jockey Rachael Blackmore and trainer Henry de Bromhead celebrate winning the The Unibet Champion Hurdle with Honeysuckle. It was a week that neither will ever forget. Photos: Inpho.

It might have been a Cheltenham like never before with no crowds and no owners but the racing was still spectacular as horse racing hit the headlines for all the right reasons which was badly needed after the pummelling it took a few short weeks ago from the Gordon Elliott photo controversy.

From a local point of view I’m absolutely delighted for Henry de Bromhead and all the brilliant team at Knockeen and what a decade or so it’s been for Henry. He saddled his first Cheltenham Festival winner in 2010 when Sizing Europe won the Arkle. He came into this week with nine winners at the big March meeting and when Minella Indo led home a one-two for the Waterford man in the Gold Cup, it was winner six of the week and a 15th Festival winner in all. Incredible.

But for anyone thinking that it’s been easy for de Bromhead then think again. In September of 2016 Alan and Ann Potts, owners of the great Sizing Europe and many other stable stars at Knockeen, removed all their horses from Henry’s care and many wondered if he’d recover from such a blow. The following March he had to watch two of those horses, Supasundae and Sizing John (in the Gold Cup) win at Cheltenham and that must have been a very bitter pill to swallow. He also went five Festivals in a row without saddling a winner.

From there he became more and more attached to Michael O’Leary’s Gigginstown Stud horses and he trained Balko Des Flos to win the Ryanair Chase in 2018. Then in 2019 O’Leary announced his decision to win down his racing operation and again many felt that this would be a big blow to de Bromhead but once again he picked himself up and just drove on.

He had two winners at the 2019 Cheltenham Festival (Minella Indo and A Plus Tard) and two more at the 2020 Festival (Put The Kettle On and Honeysuckle). In fact he’s had at least one winner at the Festival for the last five years, which is an incredible achievement – just ask the likes of Paul Nicholls and Dan Skelton.

Here at home he’s been ultra consistent with his annual number of winners going up year on year which isn’t easy when you consider how competitive Irish racing is, a point that was shown in no uncertain terms in the Cotswolds last week.

All six of his winners were excellent but it’s hard to look beyond the remarkable Honeysuckle as the star of the show. She’s lined up at the start line on 12 occasions in her career (including a point to point) and won them all. She’s won back to back Irish Champion Hurdles and after winning the Mares’ Hurdle at last year’s Cheltenham Festival, she returned last Tuesday to land the Champion Hurdle. An incredible mare. As is Put The Kettle On who made it back to back Festival wins and four from four in all at Prestbury Park by giving Henry a third Champion Chase win. And then of course that remarkable one-two in the Gold Cup as Minella Indo bounced back to form to lead home stable mate A Plus Tard to create history for de Bromhead as he became the first trainer ever to win the ‘holy trinity’ of the Champion Hurdle, the Champion Chase and the Gold Cup. When you think of the trainers that are around now (Willie Mullins especially) and those that have gone before, that is an incredible record to have. The other winners were Tellmesomethinggirl, Quilixios and Bob Olinger. And let’s not forget that the one that was supposed to win more than any of the six that won, Envoi Allen, fell. Amazing. Unfortunately he got pipped on the line (in the last of the 28 races) to the trainers’ title by Willie Mullins, who also had six winners but had more seconds and thirds. But I’m sure that won’t bother him too much.

What about Rachael Blackmore? How good is she? The answer is she’s brilliant and racing fans will know that she has been for many years now. She turned professional in March 2015 and here she is six years later as the first ever female jockey to be the leading rider at the Cheltenham Festival, she also became the first female jockey to win a Championship race at the Festival when she won the Champion Hurdle. She has always shied away from talk of her exploits as a ‘female rider’ always preferring to refer to herself as just a jockey and that’s what she is, a bloody brilliant jockey, regardless of whether she’s a man or a woman and that is one of the great things about horse racing is that male and female rider and horses compete against each other for equal pay.

She might not be over comfortable in the spotlight, something she’ll have to get used to now that she’s a superstar, but there’s no doubt that she has done wonders for the sport. Just what it needed. Take a bow Henry and Rachael.

Just as we were gearing up for the Cheltenham Festival on Tuesday morning week last, came the shock news that Munster and Ireland’s CJ Stander would retire from rugby at the end of the current season in June at the age of 31.

To say that nobody saw this coming is I think an understatement. In his statement he cited that his family had made huge sacrifices (his wife and child are currently back in South Africa) and now it was time to pay them back and step away and move back to South Africa.

On Saturday week last he played his 51st and final test for Ireland and in an emotional post match interview he said, “I am forever grateful. Dreams do come true.”

Project players as they are called often get a lot of bad press and with good reason at times but if ever a player summed up what is good about the rule then CJ was that player. 51 Irish caps and over 150 for Munster, he was an absolute warrior for both jerseys and gave 100% every time he pulled them on. A brilliant player, who will be sadly missed.

As for Saturday’s win over England, what a win it was. I must admit that I’ve been unsure about the Andy Farrell project up to now but this was a brilliant team performance and with a bit of luck and minus a red card in Wales we could very easily have won the Six Nations or maybe even a Grand Slam. Small margins is what sport is all about.

A quick mention for Ardmore’s Thomas Ahern who picked up his first (of many) Man of the Match award in Munster’s PRO14 win over Bennetton on Friday night in Thomond Park. What a prospect this lad is. 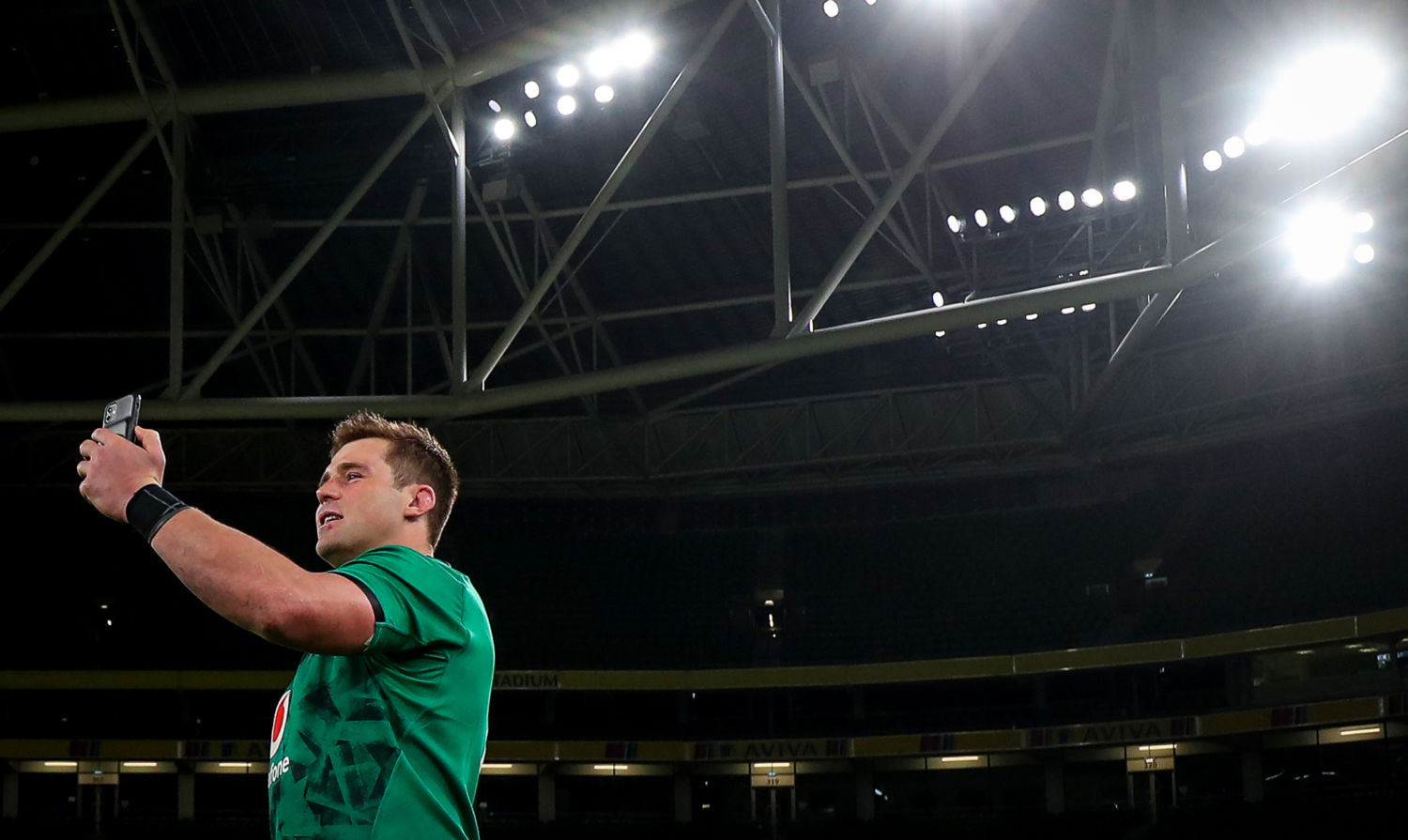 CJ Stander video calls his family in South Africa after his 51st and final cap for Ireland in the win over England.