Obituary: Pat Dalton loved life, his family and the classroom 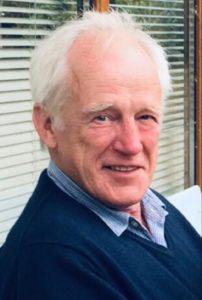 PATRICK ‘Pat’ Dalton, who died peacefully at his Ballygunner home on Monday, March 22, has left a deep and lasting imprint upon the family he loved and the Maths students he taught over 36 years.

Mr Dalton (69), who had borne three years of illness with great dignity and little or any complaint, was described at his Requiem Mass as a popular and sociable character, a good listener and an even better talker.

Delivering the eulogy on Wednesday last, March 24 at St Mary’s Church in Ballygunner, Emmet Dalton spoke lovingly of his Dad, whose Obsequies would have drawn a huge gathering had it not been for the current public health restrictions.

“When I think of Pat over the years, I think of a life full of love, laughter and great stories,” he said. “He was a Ferrybank boy who spoke fondly of his years growing up in Rockenham with (parents) Kitty and Pierce and his six siblings.”

Emmet continued: “He went to school in Mount Sion and was the first in his family to go to university where he trained as a maths teacher in UCC. He returned to Waterford where he spent the rest of his life with his wife and best friend Etta. He had a real grá for Waterford, its history and people.”

Chief Celebrant Fr Liam Power PP, a classmate of Pat’s in both Mount Sion and UCC, said he was very aware of “his great reputation as a maths teacher” at Waterford’s Mercy Secondary School.

Through his vocation as an educator, Pat Dalton devoted “heart and soul” to his work in a subject “which many pupils really struggle with and find difficulty with. But I was just blown away, while looking at the RIP condolences page, by the level of thanks and sympathies expressed by former pupils, 20, 30, 40 years later.”

Those former pupils, said Emmet, “always spoke fondly of him as a kind, brilliant teacher whose classroom was often filled with laughter. He loved to announce a surprise test to his students with the words: ‘pull out a page and put your name on it’.”

And that love of teaching and commitment to students remained following his retirement, teaching both his sixth year honours leaving cert class and youth groups in the local community.

Claire Dalton described Pat as a “wonderful dad” whom she shall continue to look to for guidance and support throughout the rest of her life. She thanked her mother Etta (Pat’s wife of 44 years) for “taking such wonderful care of our Dad, always. They were by each other’s side for 50 years, 50 years full of love and affection for each other.”

Pat’s investment of love, time and care in his four grandchildren – Sarah, Muireann, James and Evelyn – was referenced by both Emmet and Claire.

His strong bond with his siblings following the death of their parents, and the welcome he afforded his daughter-in-law Mairéad and son-in-law Barry, exemplified the significance of family throughout Pat’s life.

“As a husband and father he was always kind, always attentive and always interested,” said Emmet.
“Pat had too many friends to count from his college days, living in Kilmacow, working in the Mercy and through his many years as a member of Waterford Golf Club. They rallied around him and were a great support to him. I know he was really grateful to have such good friends in his life.”

In tribute to her husband, Etta Dalton quoted the words of Ralph Waldo Emerson: “The purpose of life is to be useful, to be honourable, to be compassionate, to have it make some difference that you have lived and lived well.”

Of the many heartfelt tributes posted online, one suspects the words of Marian Fripps spoke for so many last week, underlining the legacy that all great teachers, in the course of their work, unknowingly bequeath.

“Sincere sympathy to all the Dalton family on the passing of dear Mr Dalton. He dragged us kicking and screaming up to the standard required for honours Junior Cert Maths. I will always remember his bag being flung on the desk and the chalk rising out of it as he commenced our 40 minutes of sheer fun, learning in spite of ourselves and life lessons. Sleep well, Mr Dalton.”

Pat Dalton, predeceased by parents Kitty and Pierce, is survived by his wife Etta, children Emmet and Claire, grandchildren Sarah, James, Muireann and Evelyn, his siblings, son-in-law Barry, daughter-in-law Mairéad, extended family, his many friends and grateful past pupils.

Said Emmet: “He was such nice man and it was a pleasure to spend time in his company. He will be greatly missed by many but always fondly remembered.” May he Rest In Peace.