Blues out to end losing run in Derry 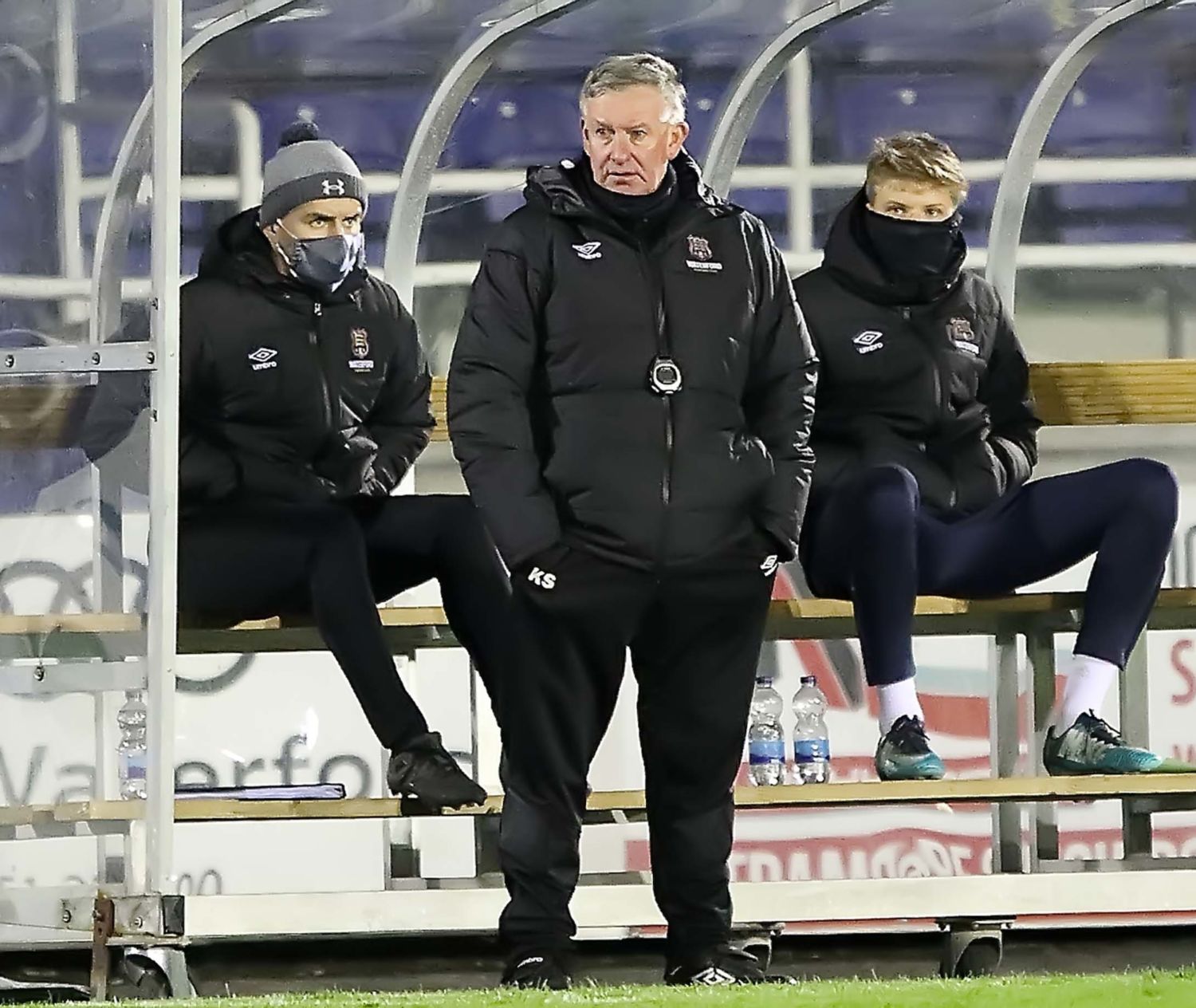 While disappointed with the result, Waterford FC manager Kevin Sheedy couldn’t fault the effort of his players on Friday night last against Sligo Rovers at the RSC. He goes to Derry tomorrow in search of his first win as Blues’ boss. Photo: Noel Browne.

Waterford travel to the Ryan McBride Brandywell Stadium to take on Derry City next Saturday in their third league fixture of 2021.
The Blues under the guidance of manager Kevin Sheedy go north in search of their first points of the season on a ground where the Blues haven’t won since 2018. The Blues will look to build on a much improved performance against Sligo at the RSC on Friday night.

MUCH IMPROVED PERFORMANCE
The return of Darragh Power to the defence was a big plus and Kyle Ferguson at centre back is a good defender in the making. At left full Jamie Mascoll is turning into a fans’ favourite.
The combination of Shane Griffin, Oscar Brennan and Adam O’Reilly in midfield certainly made Sheedy’s team more competitive in that area. Up front Cian Kavanagh will be full of confidence after his debut goal and the young striker has the pace and power to trouble Derry City’s defence. Out wide James Watie showed against Sligo that he has the pace and trickery to create chances for the strikers and Eric Molloy showed enough in attack against Sligo when he was introduced to see him in with a chance of making the starting eleven next Saturday.
The squad is still short of experience something that Kevin Sheedy admitted after the Sligo game, but he also said that there are a couple new players in quarantine but if these players will be available for the Derry game is open to question.

‘TAKE TIME TO GEL’
Blues keeper Brian Murphy is optimistic about the future ahead of the Derry game. “It’s a new squad and we will take time to gel, we are still working out what is the best way to play for the group. Hopefully the season goes well and we will improve with every game. It’s a tough league and Derry will be a tough nut to crack, we will see how we go. I never go into a new season thinking it will go one way or the other. We have our aims and ambitions but they will stay within the group.”
Derry City started their league campaign with a two nil defeat away to Longford Town and last weekend their home game against Shamrock Rovers was postponed due to the Ireland U-21 International. The Candystripes have had a difficult start to the new season which manager Declan Devine is eager to put right. “We were poor against Longford but our home form against Waterford is excellent and we will be looking to take all three points with home advantage in our favour. We have David Parkhouse back to lead the line with Danny Laverty and John Toal back to their best along with Darren Cole.”
Derry also pulled off the coup of the season when they signed Joe Hodge on loan from Manchester City. The exciting U-19 Irish International is one to watch and the Blues defenders will need to be on their toes to keep Hodge in check. Waterford have played five times in The Brandywell since the Blues won promotion back to the Premier League. The record is: lost 1-0 in April 2018, but the Blues beat them 2-1 in August 2018 with goals from Dessie Hutchinson and Gavin Holohan. In 2019, lost 3-2 in February. Then lost 2-0 in July 2020 and lost 2-0 in October 2020. 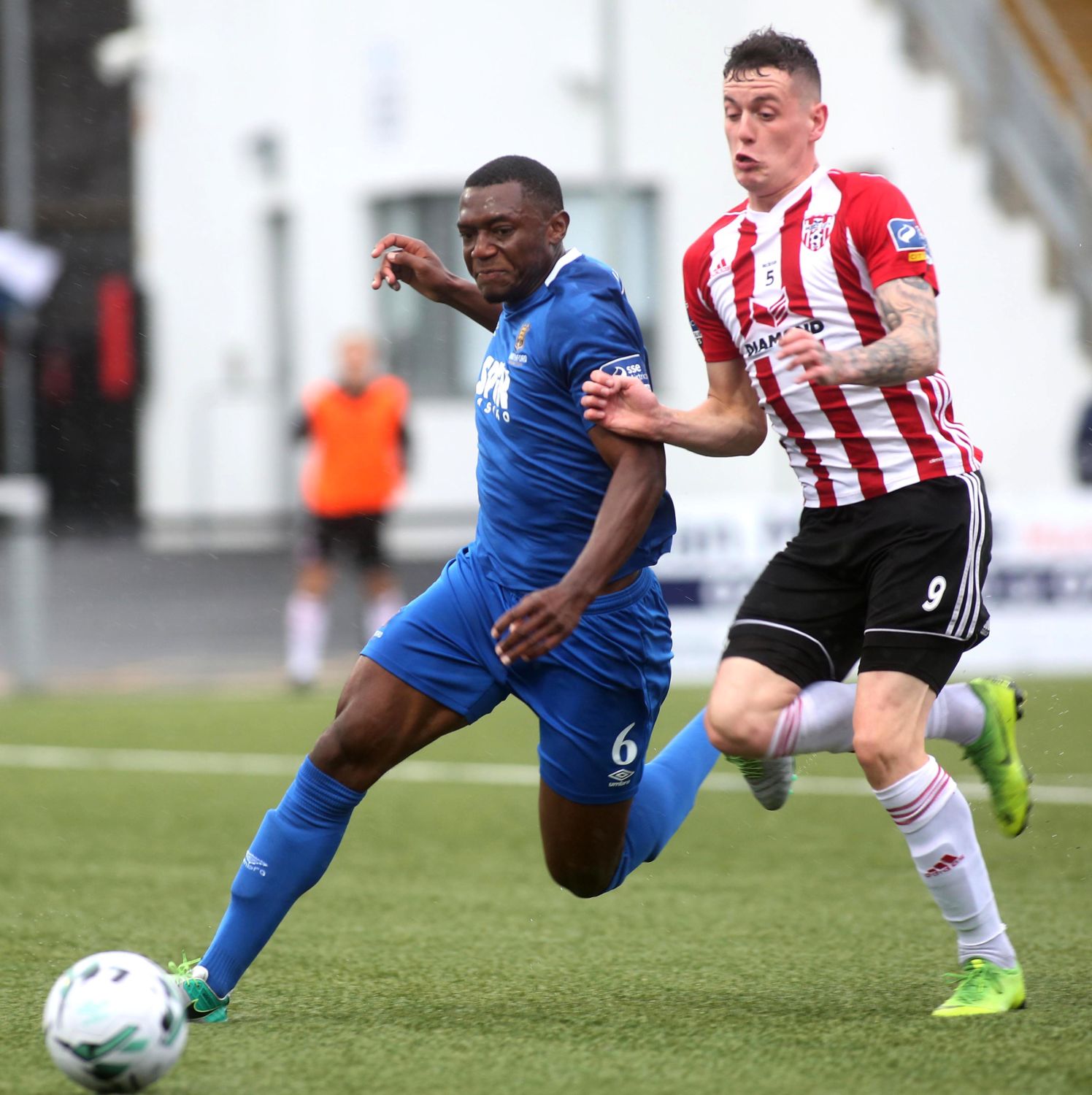 Waterford FC’s Maxin Kouogun and Derry City’s David Parkhouse batling for the ball during their EA Sports Cup Semi-Final at the Ryan McBride Brandywell Stadium in August 2018. The Blues will be hoping for a turn of fortunes on Foyle side on Saturday night after a run of defeats to the Candystripes. Photo: Inpho.