Phoenix: The wisdom of crowds

IN 17th century France, the king’s first minister was Cardinal Richelieu. Anyone who has read the Three Musketeers by Alexandre Dumas will recognise him as one of the most powerful men of his time.

One of his great personal credos was, “In popular opinion, matters falsely presented in fine words are often accepted as true.” Some popular opinion suggests that all our public representatives are doing their best to ensure that we benefit from state policy. Hopefully they are. Maybe recent funding announcements under the URDF objective mark a new beginning in the government’s attitude to this city.

Others suggest that the past decade provides ample proof of a determined political push to separate Waterford from its one-time peer cities while concentrating on the Cork, Galway and Limerick axis as the “western” alternative to the Dublin region. The question that Waterford faces is the extent to which we believe government’s fine words in the Ireland 2040 plan for instance, or accept fine words such as those uttered by the Taoiseach Varadkar in 2017 as true?

Eventually, the people will get their say on this Governments. Not a typo, you read it right. Governments plural! At the moment we do not have a single authority running the show, rather we have a bunch of strongmen tussling with each other while the country is in real turmoil. Leo, Tony, Micheál and Simon are the main Taoiseach, but the mini-Taoiseach of Jim, Darragh, Simon and Paschal are knocking around doing a bit of Taoiseaching as well. They are not power-sharing, they are shoring up power. We have just about four years of this frenemy bromance ahead of us.

In one corner stands the real Taoiseach Leo Varadkar. I am limited about what can be said here because of an ongoing Garda investigation. As well as that, he is also wounded from the drubbing of last year’s election. Fine Gael picked him for his electability, a poster-boy for a post-race, post-homophobia, post-compassionate Ireland. 2020 was another election when Fine Gael’s empathy deficit, embodied in Leo, shone through. Your concerns about homeless are important to us, please hold. We now forget the perma-omnishambles that was the Department of Health as we try to clap the brave front liners to work in miserable circumstances, with no tools, not enough colleagues and a bureaucracy that makes Archbishop McQuaid’s set up look open, transparent and progressive. We are all hoping that Leo can clamber into a better job somewhere, ideally in Europe or further afield. Meanwhile, summoning up all the human warmth of Pluto, he works to weaken the other pretenders to his power – enemies everywhere. 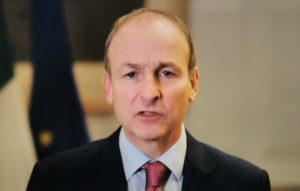 The political death clock is running down on poor Micheál, the Cork Taoiseach. He will be gone by December 2022, so flashing the cash in Cork as time runs out is his only move. And boy is he flashing! He is famously cautious, a caution which led to the deadly third wave. Will his legacy now be the 2004 smoking ban, troika and the phrase “meaningful Christmas”?

Fianna Fáil is in open revolt, musing very loudly on who will take over when Micheál heads home for the victory lap. Very much a Cork Taoiseach, rather than a Taoiseach who happens to be from Cork!

Covid has been very good for Taoiseach Simon Harris. He was a political cadaver after his disastrous stint in Health. Equipped with Tommy Tiernan-esque abilities to look like he is really, really listening to folks has won him a reprieve. Bertie with his anorak, Leo with his socks, it is not too farfetched to think we might have Harris because of his ability to tilt his head to one side and feign understanding.

Tony Holohan is of course the real, real Taoiseach. It is no surprise, despite holding the same job since 2008. Tony has locked us up in our houses, prevented us from hugging, which shows his power moves. Leo attempted a putsch in November, but Tony responded with more lockdown, Tony was right.

Why is this important? Well by April Fool’s day, Waterford will have the final verdict on this medusa Governments. In turn, Marc Ó Cathasaigh and Mary Butler will also know if they have passed the first test of re-electability. John Cummins will know where his electoral future stands. As this was being written, news broke that the second cath lab construction contract has been awarded to local builder Tom O’Brien. All our Oireachtas members deserve credit for this, but so, especially, do the people of this area who have relentlessly pursued the prize. This was something wrenched from the cold dead hands of the HSE system. It’s a victory for tenacity and it shows we can win.

Getting close to power has been poison for Waterford politicians. Ask Ciara Conway, John Deasy, John Halligan and Paudie Coffey, the latter arguably the best cabinet minister in waiting we had. Each supported a Government that appeared to actively work to undermine Waterford and the South East. The region missed most of the economic and social recovery of 2011-2020, that bit of time in the sun between the IMF bailout and Covid. A glance around Waterford city underlines the point. When the South East electorate noticed their unbuttered parsnips, while Dublin contemplated a publicly funded white water rafting facility, they ruthlessly dumped their failed politicians. The traditional parties of power, Fianna Fáil, Fine Gael and Labour experienced massive voter erosion across the South East. The fallen party soldiers carry the scars and for the first time ever there is no Fine Gael TD from Waterford.

A drawing of the eagerly-awaited WIT Engineering building.

Government promised that both WIT’s Engineering building will go to PPP tender and construction of the cath lab would be finalised before the 1st of April. The cath lab is cheap, a snip at a few million euros, but is emblematic of how Waterford and the entire South East have been treated since 2011. The political failure to expedite the project before now is extraordinary.

But through the filter of the Cork dominated hospital group, led by the inimitable Gerry O’Dwyer, little effort appears to have been expended on delivering the service. The terrible delay that started with a political lie in 2016 has shamed three Fine Gael health ministers. Hopefully the move to construction marks a turning point.

Meanwhile, WIT’s proposed €50m Engineering building, has been slow-walked since first announced in 2007. It was cancelled a few hours before a construction tender was to be signed in 2011, and twice postponed since then. If built, it will be the first new teaching building in WIT since the Tourism and Leisure Building was designed in 1997. €996m of other higher education projects have proceeded since then, everywhere except Waterford. There is no sign of WIT’s new Business building which was cancelled in 2011, or of the Crystal site being acquired, as the TUSE project, with all its inherent contradictions, is pushed relentlessly towards an unknown destination.

April Fool’s Day will determine if our Taoiseachs have stiffed Mary, Marc and Senator Cummins. The cath lab was passing the provisional licence test for our Oireachtas members, but the WIT Engineering building shows more serious intent. In any failure to come through, the joke is on our government Oireachtas members and us. Their unrequited loyalty to devious masters will be exposed to the electorate just like a litany of colleagues before them. We are all rooting for them, knowing full well if they get through this test of delivery, further serious challenges await.