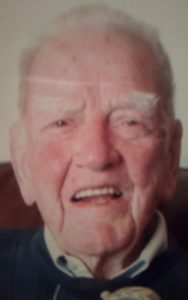 JAMES ‘Jim’ Kelly, who died on Wednesday, March 24 aged 84, was a proud border man who came south, making Rathgormack his home while serving as a Garda in 1971.

‘Big Jim’ as he was known in the village, was a popular member of the force, who served the locality with great distinction until his retirement in 1993.

“He had that unique Louth character, of listening well, saying little, taking it all in and then giving a measured response. Over the last few years or so, I visited him both in hospital and at his home (in Ballythomas) after his fall when he broke his hip. He always received me well but more importantly he received Holy Communion, the presence of Jesus, in spite of his weakening health.”

Delivering a warm and poignant eulogy on behalf of the family, Jerry Kelly said: “It was quite something, coming here this morning, through the village, to see the number of people lining out, and particularly the Guard of Honour. It was really, really something.”

Of his eldest sibling, whom he knew as Seamus, Jerry Kelly described recalled Jim’s first salary as a qualified carpenter: nine shillings a week.

Working life for Jim began earlier than expected (in a factory) following an injury sustained by his father James – also a carpenter – which meant “the rest of the family had to go out to work to keep the place going. Jim was not only good with his hands but he was very bright”.

In 1958, while Jerry was still in Primary School, Jim passed his exam with An Garda Síochána. Following graduation, Jim was stationed in Naas, Monaghan and Kildare before he came south to Waterford, serving in Kill and Lemybrien before arriving in Rathgormack in 1971, a parish he was to spend the rest of his life in.

Jerry said Jim never lost his grá for home, recalling the wonderful fireside chats they enjoyed together  when Jim travelled home while off-duty.

“He had this extraordinary ability. He was non-confrontational and I can never, ever remember Jim being in or having an argument. He had this innate ability to see problems and resolve them – an extraordinary man…and I often wonder, did he ever actually make an arrest?”

Extending sympathies to the Kelly family and those who had tuned in from Monaghan and Louth, Fr PJ Fegan recalled Jim’s love of Gaelic Football and his staunch support for the Rathgormack Club over the decades.

Fr Fegan added: “Jim’s motto was: ‘Gardaí depend on local people and that is why getting to know the people was always the main objective’. What a motto to have. And judging by the comments in the locality, Jim did a very good job in knowing his community. …He enjoyed a good, healthy life until recently when health served to fail him. Being a Guard and living in the locality cannot have been an easy task yet throughout the parish, Jim was highly respected. It is said that summonses were few. He was a man who was fair and would give advice to young and old. For this, he was appreciated in a community he served for some 22 years as a Guard and retired to the local community in Ballythomas.”

On the 50 years his brother spent in Rathgormack, meeting and marrying Peggy Coughlan “was what capped it all,” said Jerry Kelly.

“That’s what made it. And this place, Rathgormack, it’s something else. Coming here this morning, in the cortege, and seeing the people lining the streets outside, and to see the Guard of Honour, it’s not a bit of wonder he never, ever wanted to leave this place. We always did have a warm feeling, when visiting here over the years to see Seamus and Peggy and now we can see this place for what it really is. It’s fantastic. So we thank you, his friends and his neighbours, for making that happen for him but we particularly and especially thank Jackie and Kevin, they have been so good to him over the last number of years…farewell, big man.”

Jim Kelly, predeceased by his parents, wife Peggy (in 2016) and brother Joe, is survived by his siblings Don, Jerry and Maura, step family Johnny, Joe and Jackie Coughlan, brother-in-law, sisters-in-law, nieces, nephews, relatives, friends and a grateful community. May he Rest In Peace.