On The Spot: Niamh Rockett 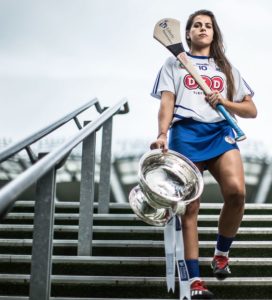 Aged 27, Niamh Rockett is daughter of Colleen and Eddie and currently captains the Waterford Senior Camogie team. A UCC graduate, Niamh is a Maths and Physical Education teacher at St Declan’s Community College in Kilmacthomas – her alma mater – having previously taught at Blackwater Community College in Lismore. Currently living in Kilkenny, Niamh was named on the 2020 All-Star Camogie team following an outstanding year in the white and blue of Port Láirge.

I’m up most mornings between 7 and 7:15am and then I’m into the car for the 40-minute drive to St Declan’s Community College in Kilmacthomas, listening to a podcast – Tommy, Hector and Laurita a lot of the time – or a variety of other radio shows on the way there. The regular school day runs from 9am until 3:45pm but we’ve been finishing at three o’clock during the Covid restrictions. Once work is out of the way for the day, I make time pretty much every day for some sort of exercise – in the school gym, along the Waterford Greenway or around my house in Kilkenny. I train five to six days every week and just love being active; it’s hard to beat a puck around sometimes and I love getting out on the bike once the evenings get longer and the weather improves. I do yoga as well, spinning too; it’s nice to have a bit of variety when it comes to exercising, especially at the moment.

I like meeting up with friends for a coffee – all done while socially distant of course – and I’ve a miniature Dachshund puppy called Biggie, a real bundle of energy, so he needs plenty of walks! In terms of camogie, well, there’s not a whole lot we can do at the moment because of the restrictions so hopefully we’ll have better news on that sooner rather than later. I love being surrounded by my family and, just the same as everyone else must be feeling at the moment, it’ll be great to be around them the way we all were up until last March. When I’m at home, I love cooking, baking and trying out new recipes. I cook every day and I really enjoy it.

I went to St Declan’s Community College, literally down the road from where I grew up. School certainly left a positive mark considering my career path and where I’ve ended up!

Two really stand out for me. My business teacher Mary Sexton and my maths teacher Brian Murray: both really supported me through both my sporting and academic careers. Brian is a PE and maths teacher and he definitely inspired me to become a maths teacher. Mary really pushed me to achieve my best, I would take a lot of my resilience in sports from how she pushed and supported me in school.

I would tell myself not to be so hard on myself, I always pushed myself to almost be a perfectionist in everything I did when I was younger, which probably inadvertently stressed me out when things got on top of me. When I was 16, I was told I should give up all sports or else I’d be in a wheelchair by the time I was 30. But looking back now, I never thought I would have achieved what I have done to date. So if I was given the chance to talk to me at that age, I’d tell myself it will all work out and what is meant to be won’t pass you.

I like heading off for a walk or a run while listening to music. I also love visiting my niece and nephews. Having fun with them is a really good way to unwind, especially before big games. 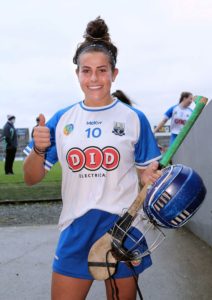 I don’t have a specific favourite film, but something like ‘The Lion King’ or the ‘Ice Age’ movies, films that are easy to watch, appeal to me a lot. I absolutely love music and would listen to any genre but my favourite band is Coldplay. I’ve too many tracks of theirs I love that I can’t pick out just one of them.

The last time I cried was probably when my knee was sore after going for a run a few weeks back, if it swells up it can be very painful, but it is usually accompanied by a lot of stress so I think my body shuts down if I become overwhelmed!

I think winning a Senior Camogie All-Star was definitely a very happy moment not only for me but seeing how thrilled my friends and family were filled me with so much happiness. It was such a special moment, one that I won’t be forgetting anytime soon.

I pray to my grandmother and light candles when I feel I need some advice or guidance. My grandmother was always very special to me. I believe she is always watching over me.

Definitely mice or rats, I really, really hate them! Growing up on a farm gave me zero tolerance towards them; I just never got used to having them around the place!

He’s not a possession as such but my Dachshund Biggie is a real character. He’s only a puppy now but anyone who meets him falls in love with him!

My favourite thing about Waterford is definitely the feeling I get when I put on the jersey to represent the county. It really is a cliché but it is such an honour, one that I really don’t take for granted and I never will, either. In the words of John Mullane – ‘I luvs me county’.

I love going out for food and coffee with my friends, so having more restaurants and coffee shops would be great. A little more variety would be nice. I feel like I end up going to the same places pretty much all the time.

* Niamh is supporting the ‘Don’t Give Up’ campaign organised by Arthritis Ireland, which highlights the importance of physical activity and mental well-being when living with a chronic condition. Niamh, who was diagnosed with arthritis aged 16, said: Your mindset is really important. You need to surround yourself with positive people, who won’t put limitations on you. Living with this condition over the past 11 years has made me more aware about not taking opportunities for granted. It’s made me appreciate things more.” Information about juvenile arthritis – and other forms of the disease – can be accessed  at www.arthritisireland.ie while the Arthritis Ireland helpline is 0818-252-846.