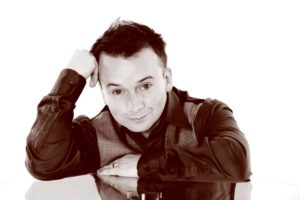 I’VE always been a fan of Richie Hayes. Since… well… forever, really. As a child actor, Richie was gifted. I’ve seen Richie in every form of stage performance – musical theatre, panto, drama, Tops, variety shows and television. His musical range is astonishing and his comic timing is uncanny. Not only is he completely comfortable on stage, but he makes everyone and his audience around him comfortable as well.

And his Patrick’s Night variety show from the stage of the Theatre Royal is slick, professional and polished with an intimacy that seasoned television presenters would die for. When Richie looks into the camera, you just know that he’s talking directly to you. It’s never forced and he has that subtle quality of underplay that our late friend Des Manahan valued so much.

Richie is a born entertainer and his opening Irish hits medley of Whiskey in the Jar, Dicey Riley, Old Dungarvan Oak and others is a real show-opener. There’s an Irish Pub ballad singalong that mentions Paddypubs from Honolulu to Sidney to Moscow and Morocco and then segues into a rabble-rousing jig from the brilliant Rebecca McCarthy-Kent that sets the toes tappin’ and leppin’ along.

Richie knows variety and he’s brought along a talented trio of musicians – David Hayes on piano, Rebecca McCarthy-Kent on fiddle and Mark Robinson on every stringed instrument known to man. And he’s also included some well-known performers. He’s dueting with Brian Dunphy from the High Kings on Grace and with X Factor star Mary Byrne on Molly. There’s also an amazing sequence of solo performances from the Mulcahy-Bible School and another dance troupe from Florida where the sun shines brilliantly along with a snugly-warm Hayes family performance with dazzling harmonies and natural ornamentation from brothers David on piano and John in Fenor on Hard Times. A concerted performance of that great Denny Corcoran anthem ‘City of Music’ features all the heads from Waterford musical theatre.

Richie’s got that likeability factor. You feel at home with him and he connects easily with everyone in the audience. And he can laugh at himself. And his diminutive stature… “oops, I nearly fell over myself there. Not to worry; I wouldn’t have too far to go down.” There’s an Andrew Lloyd Weber – appropriately mis-titled as ‘Wee Andy McWeber’ – hits from the musicals scene that is set to tunes from the Dubliners, Fureys, Clancies, Percy French etc. that sees Richie goose-stepping the stage with Don’t Cry for me Argentina to the air of Whiskey in the Jar. You wouldn’t believe it if you saw it on a stage!

Richie has an amazing range and he’s naturally musical. He moves melody and tempi easily along, while always remaining true to the core of the song. We get the story of all the big ballads… City of Chicago, Black Velvet Band, I Used to Love Her, The Town I Love So Well, Rattlin’ Bog, Fields of Athenry, Boston Rose and a Danny Boy, with a wonderful final note, that’s just right for the night that’s in it.

Richie Hayes’s Patrick’s Night Online concert from the Theatre Royal was a first-class night’s entertainment and is still available online.

Well worth the ticket.

View from the Green Room: At last – PEIG The Movie!