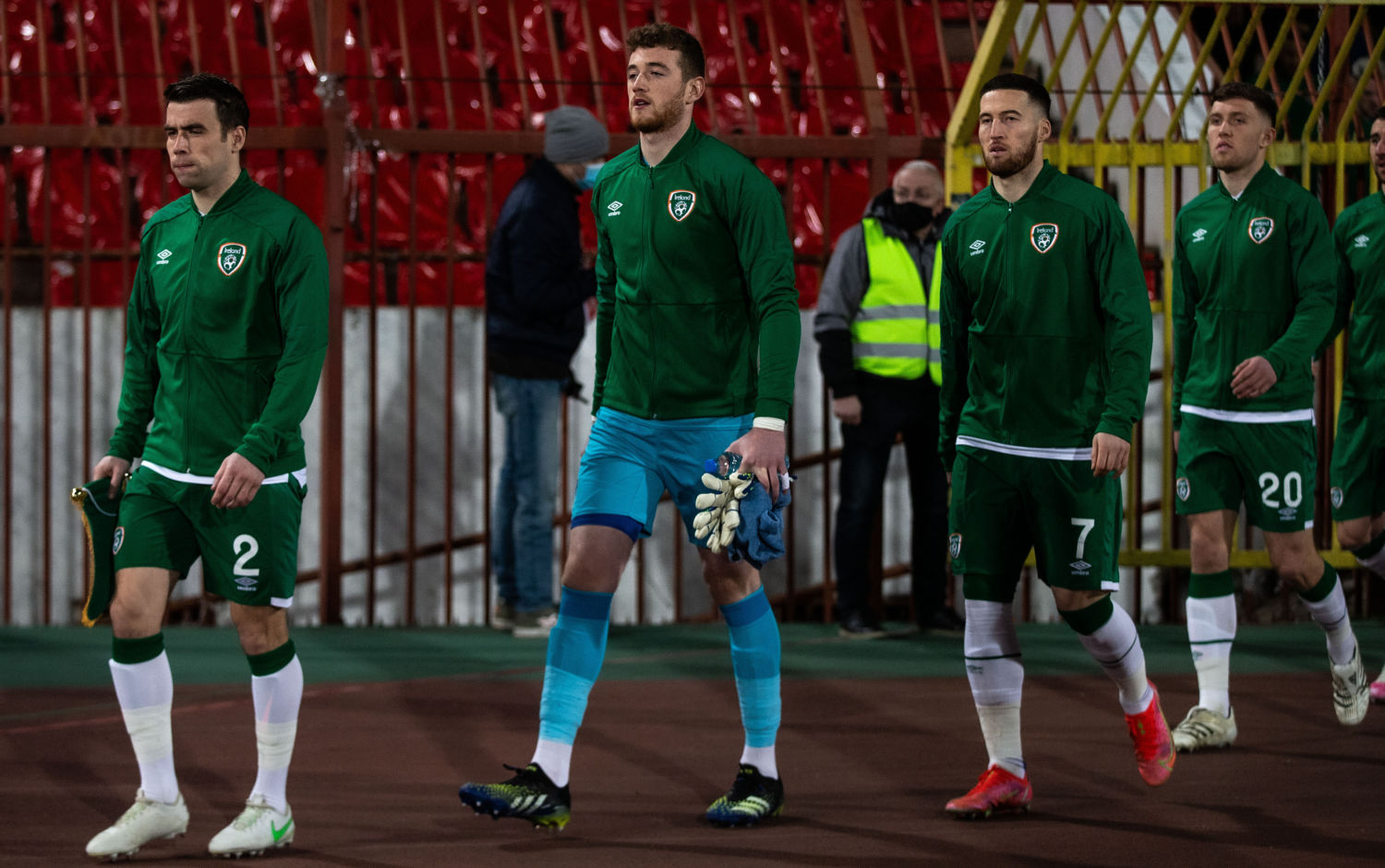 It was a bad week for Irish football but some of the personal abuse targeted at Irish goalkeeper, Mark Travers, by so called Irish fans was out of all order. Photos: Inpho.

What a week that was for Irish football.
I was at home on Wednesday night last when the Republic of Ireland team to face Serbia in Belgrade in the opening qualifier for Qatar World Cup came through. A quick look through the team led me to immediately ascertain that this was a very youthful and inexperienced Irish side. I knew we were fairly decimated with injuries, I thought to myself, but a quick look at the subs’ bench immediately made me go ‘Wow, that’s a brave team selection.’
That was when I saw the likes of Shane Duffy, Robbie Brady, Jeff Hendrick, James McClean and Shane Long all on the bench and youngsters like Waterford’s own Jayson Molumby, Josh Cullen, Alan Browne, Aaron Connolly, Dara O’Shea and Callum Robinson all starting.
A new team for a new campaign. A brave move by Stephen Kenny especially considering that he went into this game still in search of a first win as Irish boss, following four draws and four wins from his opening eight games in charge.

During those eight games his Irish side scored just one goal so with the first anniversary in the job coming up next week he could easily have played it safe, especially with so many injuries, but he didn’t. I like that.
Ireland got off to the best possible start when Alan Browne put us in front and all of a sudden this was shaping up like a night of nights in Belgrade for the Boys in Green. Dusan Vlahovic levelled things before the break and a brace from Fulham striker, Aleksandar Mitrovic, in the second-half looked to sink us. James Collins pulled one back on ’85 and try as we did, it wasn’t to be an Serbia hung on for what was probably a deserved win but I thought we wouldn’t have been too hard done by if we came away with a draw.

The reaction after the game on social media quite honestly disgusted and sickened me. Nearly all the nasty venom of the ‘Irish supporters’ (I use that term very loosely in this instance) was targeted at the Irish goalkeeper Mark Travers.
First things first, I don’t think his performance, regardless of the circumstances, deserved such abuse. Let me rephrase that. Nobody deserves abuse but unfortunately that’s social media today. You are going to get abuse from somebody, that’s just a sad reality. My point is I genuinely don’t think he played that badly. Maybe he was a little too far off his line for Mitrovic’s lob but it’s not as though he was miles off his line and it was a pretty spectacular finish by the Fulham man.

But obviously I’m not as much as a ‘goalkeeping expert’ as the so called Irish fans that piled in on social media to stick the boot in. I’ve seen plenty players over the years have worse performances than this and not get have the grief that this young man took and it sickened me. I thought we (Irish fans) were better than that. But obviously I was wrong.
Let’s put a bit of context on this for all the Travers bashing ‘experts.’

He’s 21 years of age. He was making his first competitive start for Ireland and just his third appearance in all, with the other two coming back in 2019.
He has played a grand total of 43 games as a professional footballer and 26 of those on loan at Weymouth in the Southern League Premier Division – a very long way from facing Dusan Tadic and company in Belgrade in a World Cup Qualifier.
He made eight appearances on loan at Lee Power’s Swindon Town this season before being recalled after Christmas and since then he’s played just once for Bournemouth. In all he’s played just nine games in his nearly four seasons with the Cherries he has played nine times. Three times in the Premier League, three times in the League Cup, twice in the FA Cup and once in the Championship.

A couple of weeks ago the Kildare man wouldn’t even have dared to dream of being in the first eleven for this game. If all things were right he would have come into this campaign as fourth choice goalkeeper behind Darren Randolph, Caoimhin Kelleher and Kieran Westwood but injuries (which have blighted Kenny’s reign so far) intervened and dictated that he was thrown into the deep end on Wednesday night.
Did he pick the team? No. Did he demand to be picked? I very much doubt it. Does he deserve the abuse he’s taken? Not a chance.
Sadly he wasn’t picked to start again on Saturday night and I think that was a poor call from Kenny. although it was ‘only’ Luxembourg that was a much happier performance for Travers. I’m really rooting for him now and will be following his career with interest from here on. Hopefully one day he’ll come back and save a penalty to send us to a World Cup or something….that would be some Karma.

To the Serbia performance itself, I thought it was really good. To be fair I’ve really waivered in recent years in my support for the Irish national team. I still watched the games but I couldn’t get excited. Most of the football we played (or didn’t) over recent campaigns was awful to watch and so I’d rather we went out and gave it a go and didn’t qualify for major championships than go out and be terrible to watch and still not qualify for those same tournaments.
Once again I thought Cappoquin’s Jayson Molumby (who has become one of Kenny’s go-to men) was really good and was very unlucky to be taken off. I also really like the look of Josh Cullen and Alan Browne and I’ve always liked Callum Robinson and Aaron Connolly. Seamus Coleman, as usual, was class on and off the pitch and there were plenty of other positives too.

There were not too many positives floating around Dublin 4 on the following Saturday night after Ireland were beaten 1-0 by Luxembourg. Who saw that coming? You can dress it up any way you want but that was a disaster of a result and the performance didn’t really deserve anything better. Again I was surprised with the changes he made, including dropping Jayson Molumby. It was a very bad night for Irish football and Stephen Kenny. 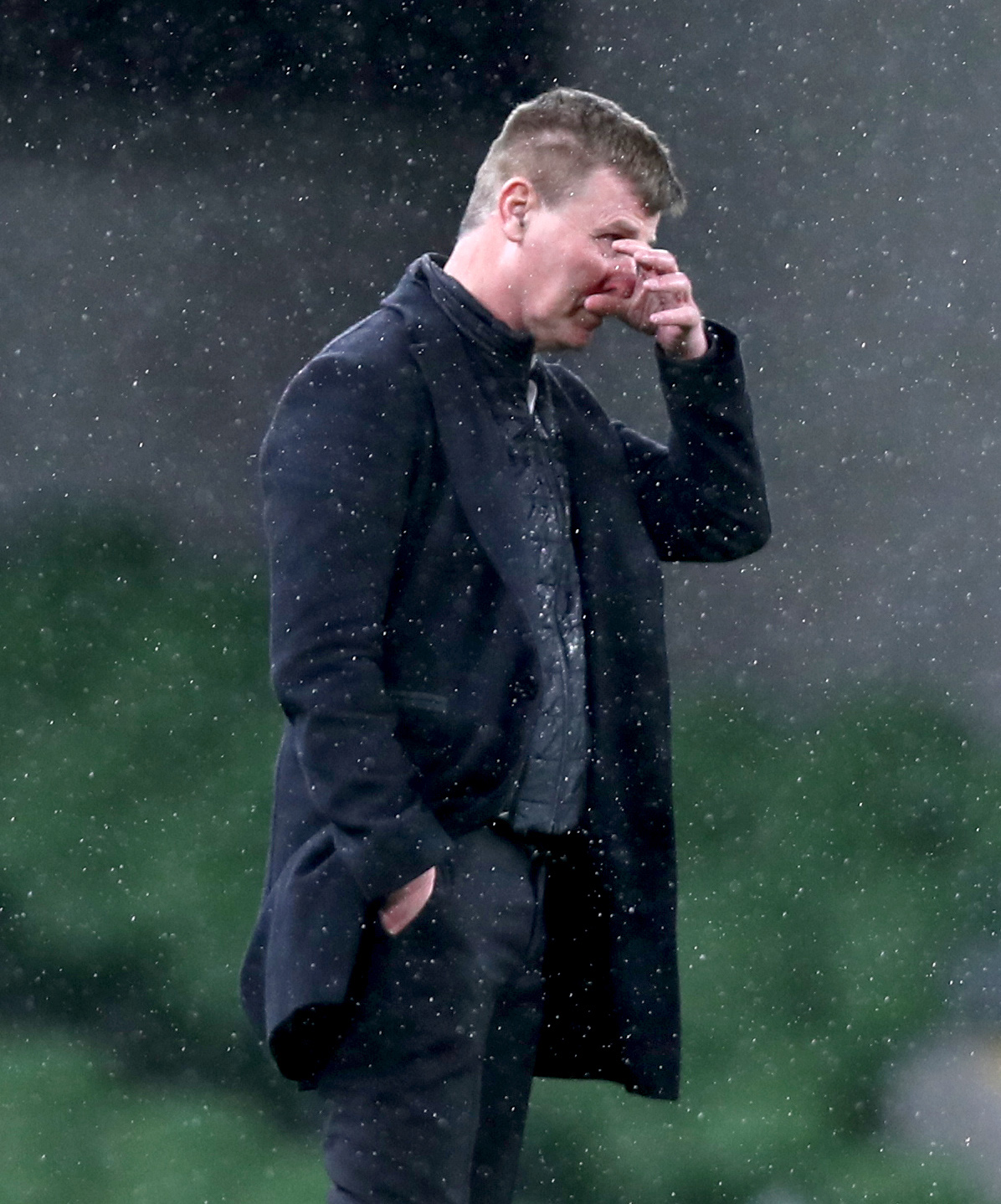 The Luxembourg defeat will haunt Stephen Kenny for many years.

I don’t think we were ever going to qualify for the Qatar World Cup but it hurts even more when you’re out of the hunt after your opening two games. I was never Kenny’s biggest fan in the past but I just think he’s been jinxed with the luck he’s had so far and he deserves a bit of luck for the liathroidi he has shown and by giving youth its fling, who knows where it will take us…worth a shot for sure. Come on you boys in Green (in good times and in bad….not just when things are going well).

A RISING STAR WITH A FAMOUS GRANDAD
A few weeks back we did a very enjoyable series on Waterford’s Rising Young Sports Stars, in which we shone the spotlight on some of Waterford’s brightest sporting prospects under the age of 21. One of those prospects was Munster Rugby Academy player, Eoin O’Connor. We described Eoin as towering second row with a bright future, who is currently battling back from injury but has all the attributes to make it in the professional game.
The next morning I was contacted by our GAA correspondent, Phil Fanning, to ask if I knew who Eoin O’Connor’s grandfather was? No idea I replied.
‘Eoin O’Connor is the only grandson of the great Philly Grimes,’ he informed me.
@His mother is Kaye, Philly’s only daughter and they live in Dunmore East,’ he continued, ‘and clearly shares all of the hurler’s renowned athleticism.’

‘As a child Kaye had Eoin in hurling in Mount Sion but living in Dunmore and going to school in Ballygunner the lad wanted to play with his school friends so transferred to Ballygunner for hurling and Gaultier for football,’ said Phil.
Rugby soon took over and Eoin played for Waterpark RFC in the Munster Junior League as a sixth year student before being recruited by Munster in 2019.
‘My grandad played for Waterford, Philly Grimes, and my family would be stone mad into hurling so I was a bit of an outlier and the first rugby player in my family but it’s all good,’ Eoin said in an interview with Munster Rugby.
It is indeed a small world and sporting genes definitely run in families. Breeding breaks out in the eye of a cat they say. Best of luck with your career Eoin and I’m sure your legendary grandfather would be so proud of you. 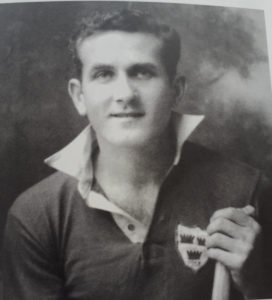 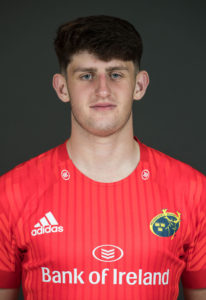