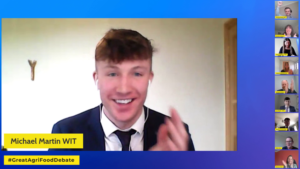 Michael Martin leads the WIT celebrations after their victory in the Great Agri-Food debate.

THE WATERFORD Institute of Technology (WIT) team is still basking in the spoils of its victory in the sixth Annual Great Agri-Food debate, organised by Dawn Meats and McDonald’s. The debate took place virtually for the first time this year as a result of the Covid-19 pandemic.

Six third level colleges took part in the event and this year marked the first time an institution from outside Ireland took part, with Wales’s University of Aberystwyth facing off against Northern Ireland’s College of Agriculture, Food and Rural Enterprise (CAFRE).

The debates were moderated and judged by a range of representatives from the agri-food industry and beyond.

This was the second time WIT have claimed the title, previously winning back in 2019 when proposing the motion “Vegan diets are better for people and planet”.

In a repeat of last year’s semi-final, WIT took on Dundalk Institute of Technology (DKIT) on the subject of ‘lab grown meats will not replace traditional livestock farming systems’. It was a fiercely topical motion, proposed by WIT proposed with DKIT opposing.

While the individual debate winners were WIT, CAFRE and UCD, following careful deliberation, the judging panel crowned WIT as this year’s winners.

“The annual Great Agri-food Debate is designed to hear from our future leaders and challenge them to critically think about the issues of today and tomorrow,” said Dawn Meats CEO Niall Browne.

“I am always struck by the high level of technical and practical knowledge our debaters showcase, and this year was no different. A warm congratulations to WIT on their victory and a special welcome to the University of Aberystwyth who added a new perspective to proceedings. I hope we will see them in 2022. A final thanks to everyone who made the debate possible this year in challenging circumstances.”