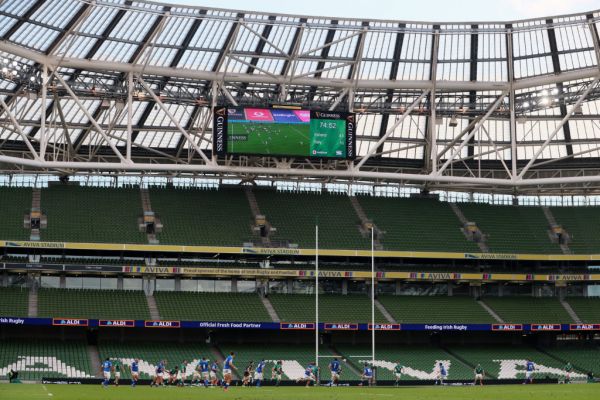 The FAI has notified Uefa that it is not in a position to guarantee fans’ attendance at Euro 2020 games scheduled for Dublin this summer.

The European governing body has asked for the 12 host cities – including Dublin – for their proposals on how many fans they expect to be able to accommodate by today.

As the Irish Examiner reports, Ireland’s inability to guarantee a minimum number of spectators will increase doubts over the four games going ahead as scheduled at the Aviva Stadium.

Dublin has three Group E games, involving Poland, Slovakia, and Sweden, as well one of the ties in the knock-out stage.

“The FAI, on advice and guidance from the Government, has today notified Uefa that owing to the Covid-19 pandemic it is not in a position at this point to provide assurances on minimum spectator levels at the Uefa Euro 2020 matches due to be held in Dublin in June,” read a statement.

“In so doing, we have advised Uefa that the matter will be kept under review and that the Dublin LOS [Local Organising Structure] team including Government will continue to discuss all issues with Uefa on an ongoing basis.

“All partners of the Local Organising Structure – Government, the FAI, Aviva Stadium, and Dublin City Council – recognise the challenges presented by spectator attendance at Aviva Stadium for the scheduled hosting of four matches at Euro 2020 this summer and that public health issues are the most important consideration in the organisation of the project.”

FAI CEO Jonathan Hill added: “We have made our submission to Uefa today and now await their response once submissions from all 12 host cities have been received and considered.”

Earlier, it was revealed that Uefa will allow host cities to upscale plans for supporters to attend Euro 2020 matches should conditions around the coronavirus pandemic improve.”

The FAI has today made a submission to UEFA regarding EURO 2020 in conjunction with our LOS partners in Government, Dublin City Council and the Aviva Stadium – a statement from the Association is available here ➡️ https://t.co/mxjaI3rTb6 pic.twitter.com/s1FU4sXsVf