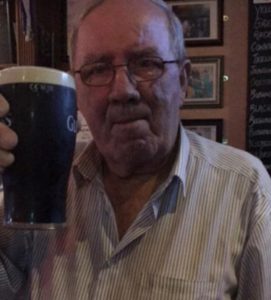 Sean ‘Showery’ Atkins, of Blacknock, Kilmeaden and formerly of Ballincrea, Slieverue, who died on Sunday, March 28.

“A LOT of people have asked over the last few days how Dad got the name ‘Showery’. My Dad would arrive into The Sweep for a pint and the lads would ask him ‘what’s the weather like, Sean?’ and Dad always had the same answer – showery. And there it began, the mystery solved.”

While eulogising Sean ‘Showery’ Atkins of Blacknock, Kilmeaden at his Requiem Mass at St Nicholas’s Church in Ballyduff Lower on Wednesday last, March 31, his daughter Kathleen noted the time of her father’s passing.

“As you all know, at 11:36pm on Sunday night (March 28), Dad passed away and all we could think of was how ironic, that Dad would probably be calling for a last drink in The Sweep Bar on a normal Sunday night.”

Parish Priest Father Richard O’Halloran extended the sympathy of the parish to all of Sean’s family and friends, and to all who viewed the funeral online, in particular to Mr Atkins’ daughter Maggie and her family in Australia.

“There are so many who would want to be here and would have been here only for the restrictions that we are following out of respect for one another so while a small band of the living are gathered in the church today, we are surrounded by a vast number who are remembering and thinking of Sean and all of you, his family, at this time,” he said.

The remains of the late Mr Atkins, a native of Ballincrea, Slieverue, were carried into the church to the strains of a lone piper playing ‘Amazing Grace’ as socially distanced mourners stood outside St Nicholas’s during the Obsequies.

Said Fr O’Halloran: “In remembering Sean today, we remember a man who never lost sight and who always kept what was most important in life, very close to him. He never let go, he never let out of his view and most certainly never took for granted, those that mattered most in life: family and community. You all – and we all – benefited from the constancy of his character. He was reliable and reliable always and you as his family know that better than anyone today.”

The second youngest of 11 children to parents Michael and Catherine, Sean worked in the building trade and in the years prior to his retirement, was well-known was the driver of a concrete lorry.

In the early 1960s, Sean crossed the Suir for a dance at the famed Olympia Ballroom on Waterford’s Parnell Street. “He didn’t know it then,” said Fr O’Halloran, “but this proud Kilkenny man was about to give his heart to a Waterford woman and on that evening, he met his future wife Anne, and their life’s journey was set on its course that very evening.”

That journey took them firstly to Shepherd’s Bush in London where they worked and married, with 2021 representing their 56th year of marriage. In the mid-70s, Anne and Sean returned home, settling in Blacknock where they built their home, surrounded by great neighbours and many friends.

Sean’s devotion to his native Kilkenny was referenced by Fr O’Halloran and both Kathleen and Ollie during their respective eulogies to their late father.

Ollie shared a memory recalled by his sister Maggie of the 2008 All-Ireland Senior Hurling Final between Waterford and Kilkenny and how her own disappointment was immediately diminished by the sight of her father’s tears of joy at Croke Park.

Said Kathleen: “When Kilkenny won – and they won most of the time – he was like the cat that got the cream, and the flag would be flying for a month in Blacknock; he was a proud Kilkenny man.”

The lingering warmth of a neighbourly gesture and the enduring strength of such kinship featured among the many online condolences extended to the Atkins family.

Wrote Eimear and Brian Barron of Carrickadustra, Kilmeaden: “Sean was always very warm and friendly to us and our children when we moved in down the road two years ago. He always stopped for a chat on his walks and it was greatly appreciated.”

According to Theresa Drohan of Fews: “I have fond memories of Showery from my time working in both The Sweep and O’Donnacha’s. He was a great man for a laugh and a joke. I hope Showery, that wherever you are the pints are good.”

A goodbye message from daughter Maggie and grandchildren Alex and Olivia in Australia was shared by Ollie at the outset of his eulogy.

“When the day comes, when we finally get back home to you, I’ll be the first person who will come and see you, I promise,” said Maggie.

“Having you as a Dad, all my life, has been an honour and privilege and I could not have asked for a better Dad or Grandad for my kids.” May he Rest In Peace.

Obituary: Pat Dalton loved life, his family and the classroom