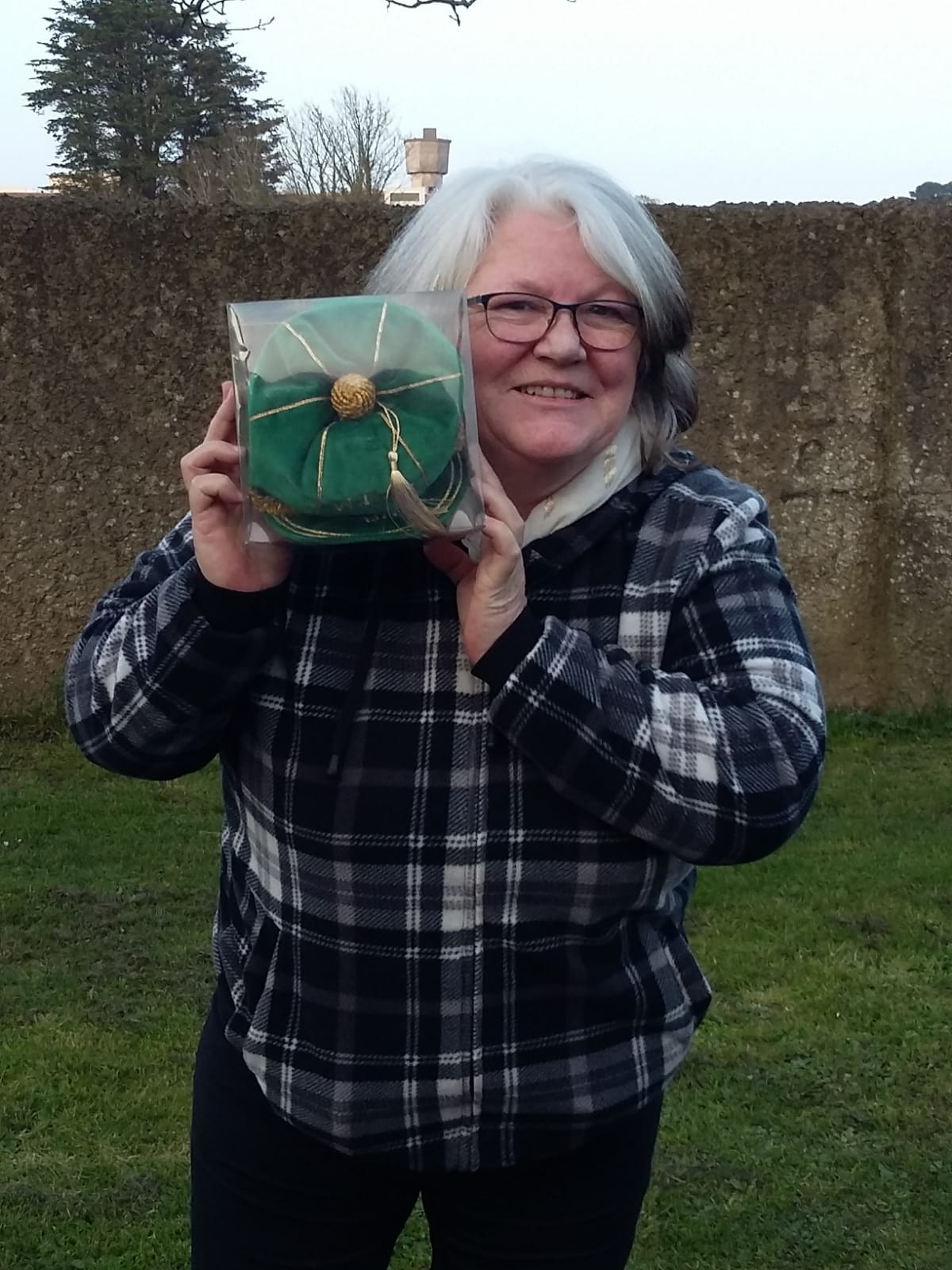 When Annette Doyle and Betty Maher (then O’Callaghan) took to the field for the Irish national women’s team in Newry on April 16, 1977 little did they know that it would be a wait of almost 44 years before they received their international caps. It would take years of campaigning and research before on Betty’s 70th birthday both were finally presented with their caps.
On March 24, 1977 a letter from the FAI was sent to Annette and Betty informing them of their selection for the upcoming international friendly against Northern Ireland in Newry on April 16. At the time the national team was dominated by players from the Dublin based clubs but due to the unrest in the North with the Troubles unfortunately causing so much suffering a number of the players who would normally have been selected refused to travel to the North.

NORTHERN IRELAND ADVENTURE
This opened the door for the players based outside the capital and Annette and Betty were two of the beneficiaries. Annette was aged just 17 at the time of her selection and still remembers the pride she felt at being selected – “It was an amazing experience. The set up was excellent. We trained at Tolka Park beforehand and I can recall the train and bus journeys to the North. It was great excitement. However when we entered the North I remember the army holding up the bus and the British soldiers coming onto it and asking us questions. It was very intimidating at the time. I’d never seen a soldier before. It was great to have the match – it showed that there could be peace between both sides and that we could work together with the Troubles in the background. For me to be able to go home and tell my parents what we had seen first-hand about the situation up there was great.” Betty adds – “I was delighted to be selected but for me it was like a day out – I’d go anywhere to play a game of ball. Looking back we didn’t even bring a camera with us to take a picture of the team. I suppose looking back we were ambassadors for ladies soccer.”

EASY WIN FOR REPUBLIC
The match saw the Republic win 5-1 with both Waterford women starting the match. Annette was a pacey right winger and claimed an assist for one of the goals while Betty was the engine in the middle of the field. The match was the North’s first after having disbanded their league some years previously. Annette recalls being interviewed for the local radio and that they were well treated with a great atmosphere.
Afterwards the coach of the Republic squad handed out pins as mementos to the players – but as he wanted to give some to the Northern players he ran out of them. Betty says, “ I ended up only having one because I won it during a game of cards on the way home!” Both ladies stress that there was no money in the game back then so at the time they thought nothing of it. It was only years later when neither had received an international cap that Annette being to enquire into receiving them. “The records for the period 1976-77 had been lost by the FAI so I also researched the records up North but without the records I had no proof. It took years to get the relevant information but I was still refused. I left it go a few years ago.”

LONG BATTLE FOR CAPS
It was only when their club –Benfica- got involved that headway was made. Both Betty and Annette are very grateful to the work done by the club but in particular to Sinead Storey-Flynn. Annette says, “This year was going to be Betty’s 70th birthday and after all she has done for the club and ladies soccer we wanted her to have her cap.”
Eventually the FAI finally relented and issued the cap. The cap was to be presented to Betty on her 70th birthday by Annette. For Annette though there was to be a surprise as unbeknownst to her the FAI had also issued her cap. Both ladies were presented with their caps by Sinead on the day of Betty’s birthday. Annette and Betty have been friends 55 years since beginning to play football together in the back field in St. John’s Park. Both described their pride they feel at having at long last received their caps – however in a testament to how humble they are both stated regret that other great Benfica players such as Yvonne Lyons and Siobhan Furlong never received caps in subsequent years. 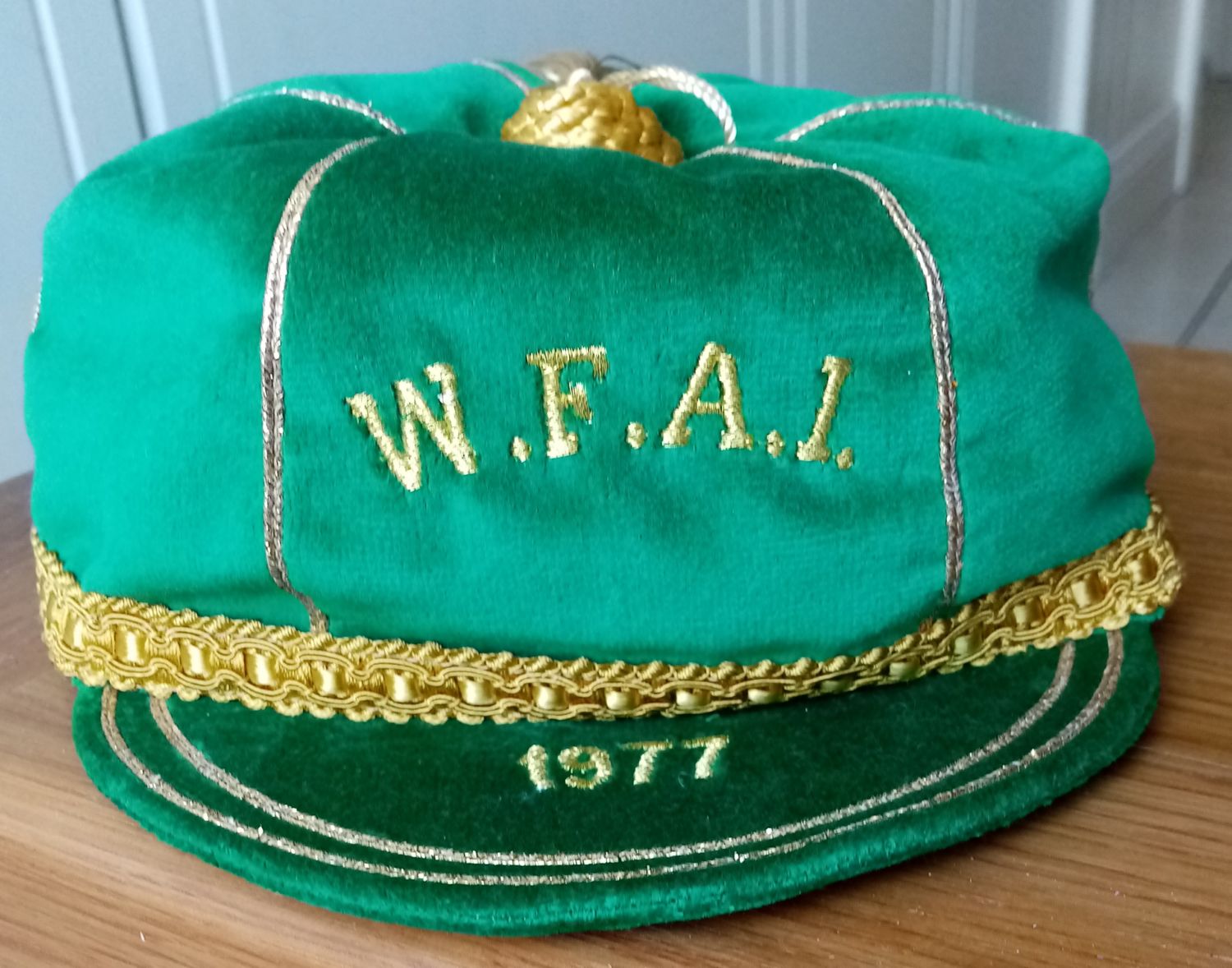 A FAMILY DOUBLE
For Betty it was a family double – her sister Mary was also capped in the early 1970s against Wales. Betty was to also play against the national team later on when she guested for Limerick in a challenge match some years later. “ I’d go anywhere for a match – I remember playing in Oriel Park before a Dundalk versus Waterford game and I also scored in Flower Flodge,” says Betty. Annette finished up recounting her tale with one recollection of how fast she was on the pitch – “at half time in a game the opposition full back was in tears complaining to her coach about me – apparently I was like a hare and she couldn’t catch me!”
Well done ladies on your well deserved caps after such a long wait.