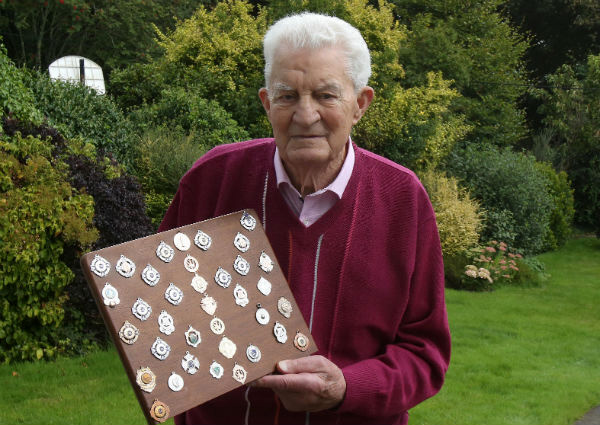 The late Jim Fives with his medals at this Galway home.

Jim Fives died a week before Christmas last year, 70 years on from one of the most famous years in Waterford hurling when, with his three brothers, Jack, Tom and Paddy on board, minnows Tourin caused one of the greatest upsets in Waterford hurling history in winning the county final by defeating a star studded Mount Sion team, led by John Keane, that was rated the best club side in Ireland at that time.
That game will be remembered for one the most unusual incidents to have taken place on a hurling field. Mount Sion were defending their title against one of the smallest clubs in the county in Tourin who had been promoted to senior ranks on winning the Junior title the previous year. With just ten minutes played a Tourin player was being sent to the line for a bad striking offence on an opposing player when John Keane intervened with the referee pleading to allow the player to stay on as reducing Tourin to 14 players could spoil the game. It was a sign of just how confident Mount Sion were of winning and so the referee relented, play went on and lo and behold Tourin played out of their skins to come away with a 3-7 to 2-5 victory.
The result was the talk of the country, let alone the county, and with Mount Sion anxious to put the record straight, as they saw it, both clubs agreed to meet in a challenge in Cappoquin, with the proceeds from the expected huge crowd to be shared equally between the clubs. As expected it was a profitable venture for both clubs but if Mount Sion thought that they would show Tourin’s final victory to have been a ‘fluke’ they were to be disappointed again as the new champions confirmed their superiority with a second victory.

THE FIVES BROTHERS
The Fives brothers were the sheet anchor of that Tourin side. All five, including Mossie, who missed out on the 1950 final as he was playing for Crokes in Dublin at that time, played for Waterford, establishing a legacy that has endured to this day.
The brothers were all big men, over six foot tall, physically strong, good hurlers, and well able to mix it. None will dispute that Jim was the standout player of the five. His journey, from lining out as a minor for Waterford in the Munster final against Tipperary in 1947 in the company of future stars such as Philly Grimes, Seamus Power and Johnny O’Connor, to feature in two All-Ireland finals with Galway before ending his career in the sixties with junior side Roscommon, would make for a most interesting and entertaining biography. Add in his career in the Army that saw him in The Congo and Syria at the most perilous times and you have the makings of a book.
Jim Fives went to The Curragh as a cadet having completed his schooling in Lismore CBS and was commissioned as a Lieutenant in 1951. When Jim Fives retired from the Army he had reached the rank of Colonel. In conversation, Jim would recall, jokingly, how, when in The Curragh, he and three colleagues were conscripted by an officer to play a game of hurling for a local side. It turned out to be a county final which they won though the four players did not know the name of the team they had played for. 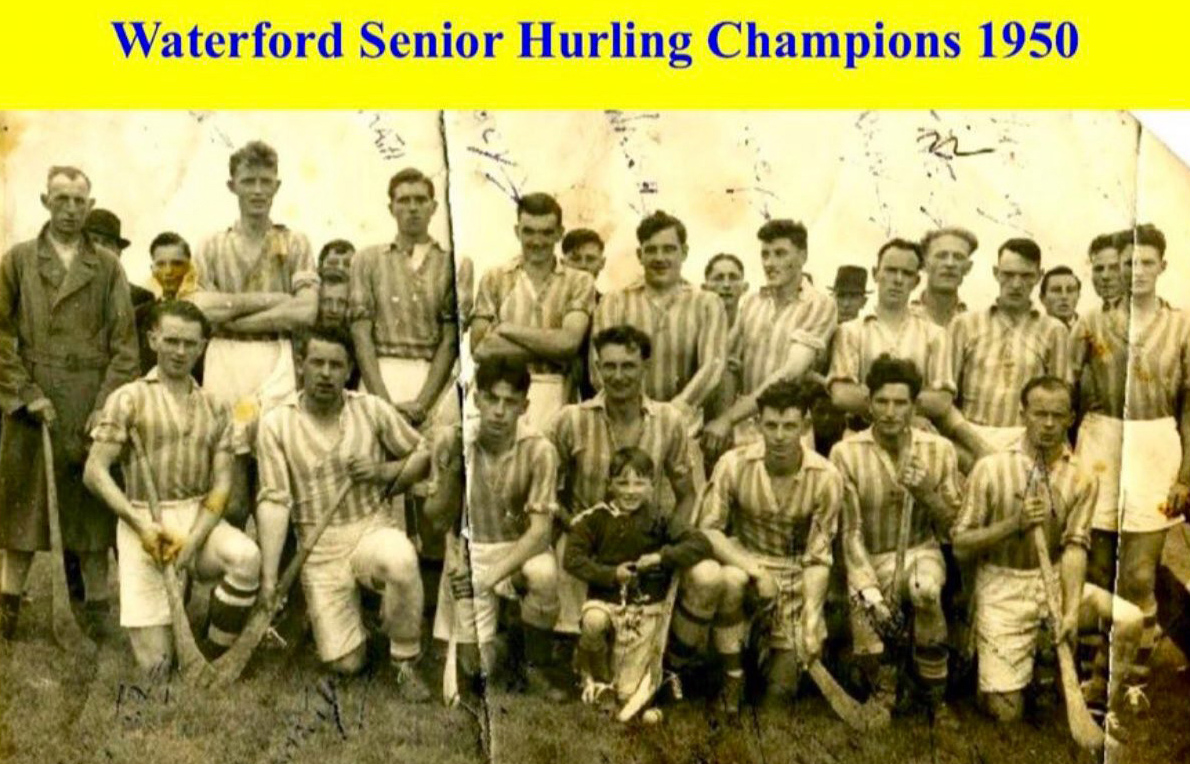 The Tourin team that won the 1950 Waterford senior hurling championship title. Jim Fives was the last surviving member of that team.

A MAN OF MANY CLUBS
Fives would recall the final against Mount Sion the same year and how he was only allowed play by agreement with Mount Sion. The rule at that time was that you had to be resident in the county to play club hurling. Tourin requested permission to play Jim Fives though he was resident in The Curragh and Mount Sion again demonstrated how confident they were of winning by agreeing to the request.
The following year Jim Fives received his commission and was assigned to the Renmore Barracks in Galway. He continued to play with Tourin but at the same time was prevailed upon to play with’ An Cead Cath’, the army side that played in the Galway championships and for whom Waterford star of 1948 Vin Baston had also played. In 1951 Jim captained Waterford against All Ireland champions Tipperary in Munster, a game which Waterford were most unlucky to lose on a score of 2-10 to 1-10 and in which Jim’s brother Mossie also played.
That same year Tourin were well beaten by Mount Sion who exacted revenge for their unexpected defeats of the previous year as they went on to regain the title against Dungarvan in the final. Meanwhile, up in Galway Jim Fives continued to play with his army side and won a Galway Senior Football title with them.
Reflecting on the twelve month period between 1950 and ’51 Jim Fives would have conceded that winning three championships in three different counties without having transferred from his home club was simply a sign of those times and something that could not have happened in modern times. Travelling from Galway to Waterford for club and championship games was an arduous journey in those days so it was no surprise that Jim, having settled in Galway, decided to straighten things out and so officially transferred to that county.

A GALWAY STAR
He was welcomed with open arms and was seen immediately as an addition to what was a good Galway team at that time with players such as Joe Salmon, Jimmy Duggan, Billy Duffy, Joe Young, Paddy Egan, Billy O’Neill and the famous, or some Cork people would say, infamous, Mick Burke of the 1953 All Ireland final against Cork. Galway’s problem was that they found themselves in All Ireland finals every third year without having played a single championship game. Consequently, Jim Fives found himself in the Galway jersey in an All Ireland final against Wexford before an attendance of over 70,000 in 1955. Despite Wexford scoring a flattering 3-13 to 2-8 win it was a great game and Jim Fives stood out as one of the best players of the thirty.
Who knows what might have happened had Jim Fives still been available to Waterford when they made the break though in 1957. In that year Galway awaited the Munster champions in the All Ireland semi-final and Jim Fives would find himself up against colleagues he had captained in 1951 such as John Kiely, Philly Grimes, Johnny O’Connor, Mickey O’Connor and Mick Flannelly. Anyone who thought that Jim might be less than enthusiastic playing against his home county were badly mistaken. Though Waterford won comfortably I recall one time asking Frankie Walsh if Fives took it any way easy in that game and his reply was, “Are you joking? I was sore all over coming off the field.” That was Jim Fives, total commitment at all times.
Jim figured in the All Ireland final of the following year against Tipperary when Galway once again had a bye into the final and suffered a heavy defeat. In 1959 Galway were moved into the Munster championship where they faced Waterford in the first round. Once again Jim was on the receiving end of a heavy defeat at the hands of his home county. That was Jim’s last championship year with Galway. The following year his army duties saw him in The Congo with the Irish peace keeping force under the United Nations where he was promoted to captain.

ROSCOMMON FINISH
On return from The Congo Jim Fives finished his hurling career with the Roscommon team that won three Connacht Junior titles. Jim enjoyed a stellar career in the Army going on to serve in Syria after the Six Day War in 1967 and retired having achieved the rank of colonel.
While Jim was an outstanding Galway player some of his most memorable performances were in the Railway Cup for Connacht against the best players from all the hurling counties. Being selected for ‘The Rest of Ireland to play the reigning All Ireland champions was a big thing in the fifties and Jim Fives was so selected on three occasions and nominated as captain of the side on one of those, a clear indication of the esteem in which he was held.
Jim Fives was a class hurler and one can only speculate as to just how things would have panned out for him and Waterford had he continued with his native county. Certainly, he would have won his All Ireland medal and Waterford might have won another All Ireland. He had reached the venerable age of 91 when he passed away last December and was predeceased by all his brothers.
Down through the years the Fives family has remained synonymous with Tourin and Waterford. Paddy’s sons John and Tom played for Waterford with Tom winning an All Ireland U-21 medal in 1992 before moving to the city where he lined out with Ballygunner, winning senior championship medals. John’s sons Shane and Darragh have been regulars on the Waterford senior scene over the past decade while their younger brother Gavin has been playing on the county minor and U-20 teams.
The legacy from 1950 lives on in the townland of Tourin on the outskirts of Cappoquin.
Jim was the last surviving member of the 1950 Tourin team and of the Fives brothers and he is survived by his wife Julie and children Karen, Kieran, Anne Marie, Allyn and Aonghus and sisters Mary and Nora.